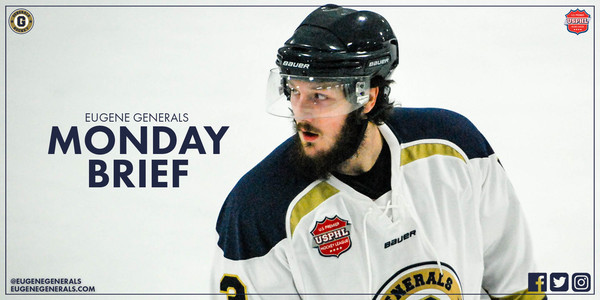 After a pair of close games against Seattle last weekend - both wins for Eugene - the Generals (32-7-3, 67pts) now have just one weekend left in the regular season as both team and personal records are well in sight with the Warriors on the horizon. 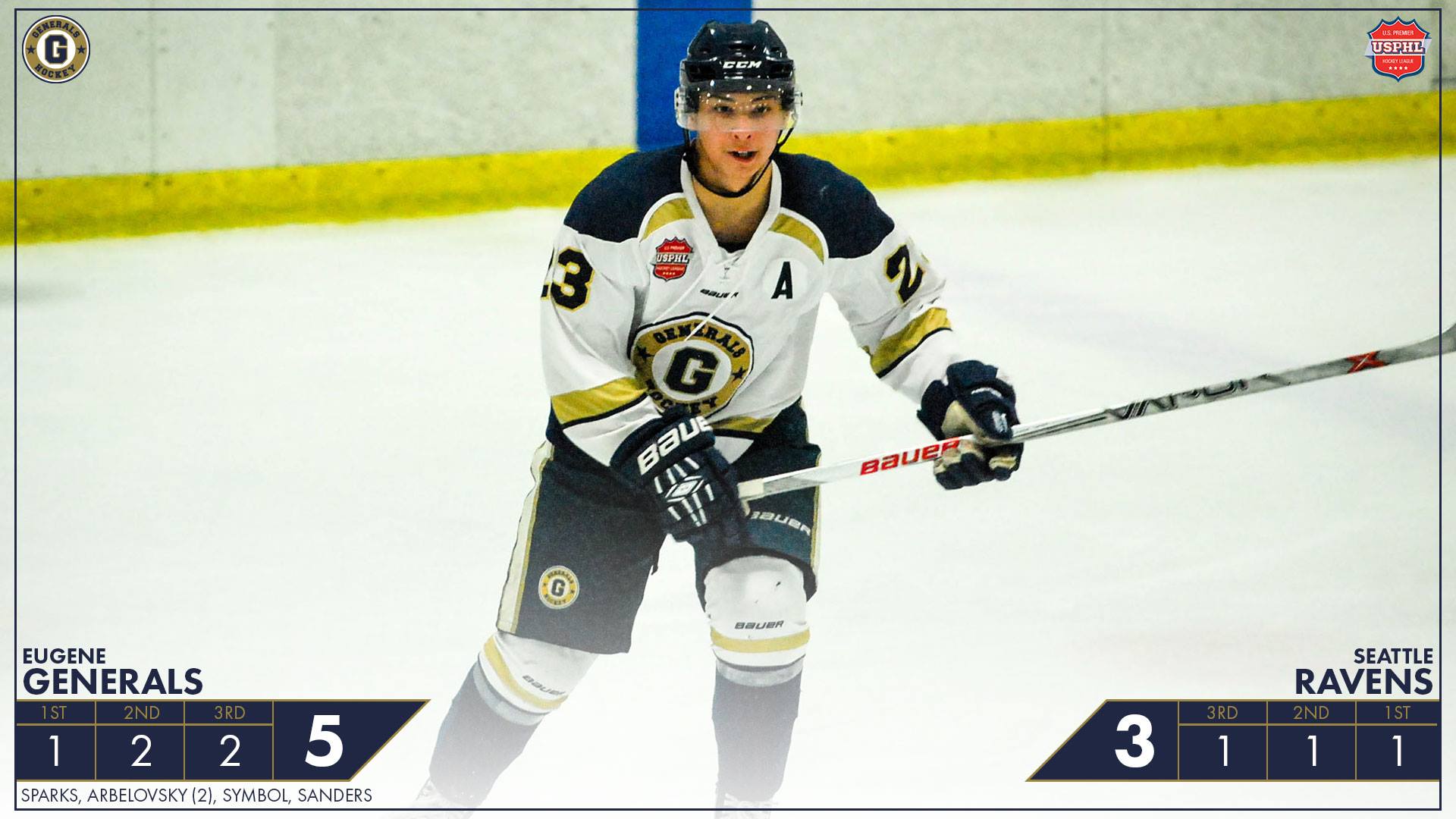 Eugene opened the scoring 3:50 into the first period with a Brett Sparks goal on the man-advantage, the defenseman’s 10th power play goal of the season, but Seattle's Payton Okon responded four minutes later by sniping home a wrist shot from the top of the circle to tie up the game.

Less than two minutes into the second period, Eugene’s Cody Arbelovsky scored at even strength with Seattle goaltender Josh Stone out of position on the play, his 42nd goal of the season, but Okon was once again up to the task for Seattle, as he tied the game at 2-2, 6:02 into the period. Okon took advantage of a broken play, seized the puck in the slot, and sunk another wrister past Generals netminder Christopher Alexakis.

Midway through the frame with Eugene’s Tristan Bulot in the box for slashing, Arbelovsky got his second of the night. The backhanded tally snuck past goaltender Stone and once more gave the home team the lead, 3-2.

With the Generals on the power play early in the third period, Colton Symbol skated to the point and collected a beautiful pass from Minnesota acquisition Jordan Szymanski. Symbol’s patience paid off as he directed the puck through the five-hole, putting the Generals up, 4-2.

Seattle made a late push towards the end of the period when Brett Lisoway made it a one-goal game with 6:01 remaining. Lisoway capitalized on a partial breakaway, chipping the puck beyond defenseman Logan Sanders in the defensive zone before slipping past Sparks and finding the net.

The Generals had the final say, with Sanders scoring the empty netter with five seconds left in the game and sealed the match by a final score of 5-3.

Stone made 20 saves on 24 shots tonight, while Alexakis stopped 29 of the 32 attempts he faced. Seattle went scoreless on their three power play attempts, and Eugene was 2-for-6. 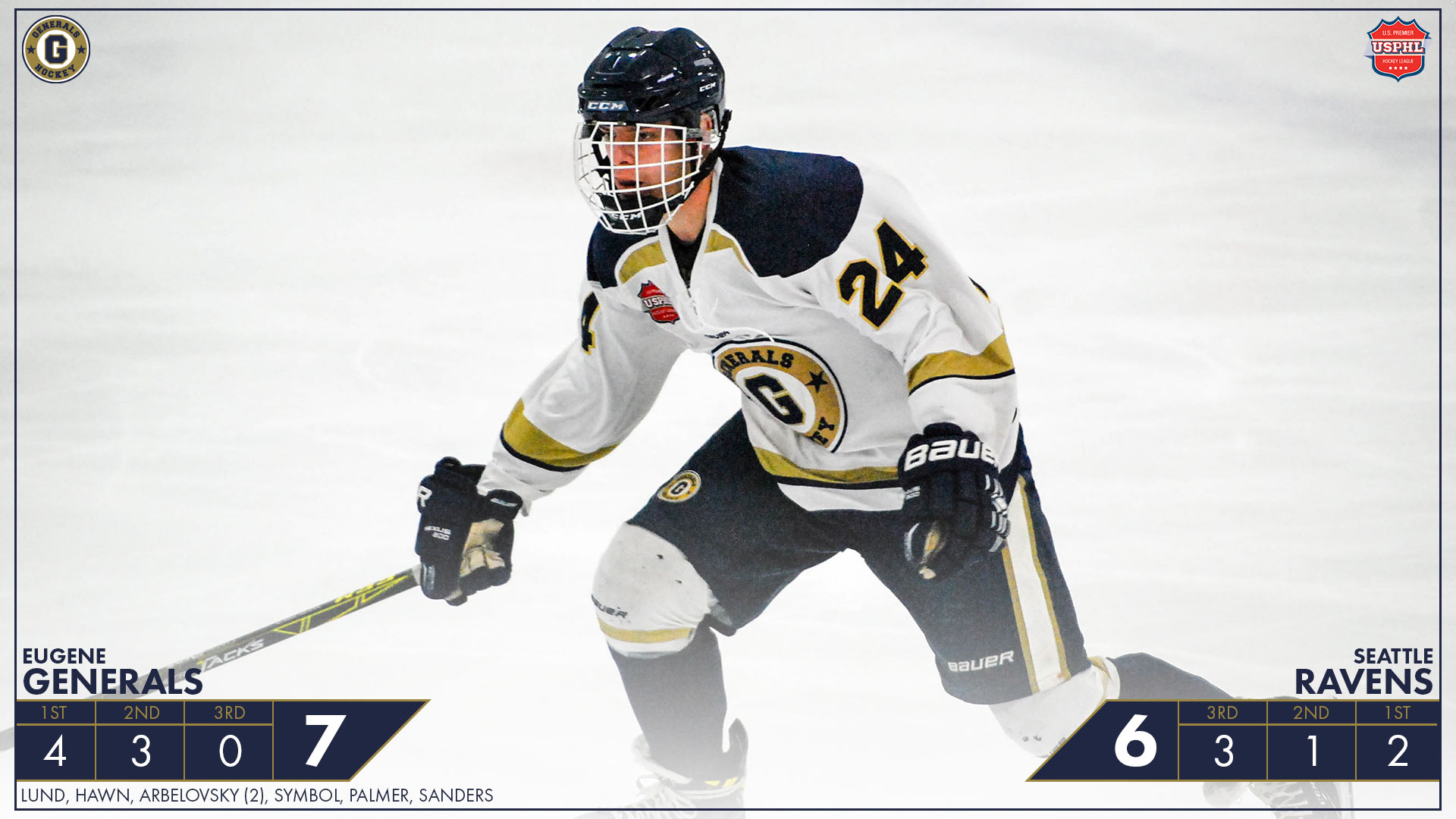 On Saturday, the Generals opened the scoring on the power play for the second consecutive evening as rookie Kyle Lund netted his eighth goal of the season on a clever redirect off of a Frazier Mohler pass. At the 11:33 mark, assistant captain Josh Hawn would double the Generals' advantage as he scored his 10th goal of the season.

Just 82 seconds later, it was back to a one-goal game as Seattle's Ryan Keilty weaved his way through the Generals' defensive pair before beating goaltender Christopher Alexakis. It was back to a two-goal Generals lead less than a minute later as the Generals would score their second PP goal of the evening thanks to Cody Arbelovsky who roofed a wrist shot from the top of the circle, his third goal of the series and 44th goal overall this season.

Colton Symbol would follow just 32 seconds later by scoring his ninth goal in eight games since joining the Generals, but the Ravens would get that goal back before the break as recent acquisition Kraig Smith suck a shot past Alexakis and that trickled just inside the post to cut the Ravens' deficit back to two heading into the locker room.

In the second period, Kory Palmer scored the Generals' third power play goal of the game with just under seven minutes off of the clock to stretch the Generals lead up to 5-1, Palmer's fifth goal of the season. Cody Arbelovsky would follow with another power play goal three minutes later, and team captain Logan Sanders would add his own power play goal at the 14:10 mark to make it a 7-2 Eugene lead. However, Seattle would be heard from again before the break as forward Brendan Phillipps scored his third goal as a Raven since joining the team at the beginning of December.

In the third, Ryan Keilty cut Seattle's deficit to three goals at the 2:50 mark as the Generals power play unit, which had scored five of the team's seven goals, surrendered a shorthanded opportunity to Keilty who capitalized to score his second goal of the evening.

Two and a half minutes later, defenseman Biko Neuenschwander would continue the comeback by scoring off of a hard shot from the point that snuck past a screened Alexakis in net, and Ryan Donlan would soon make it a one-goal game for the first time since the 13:12 mark of the first period by scoring the Ravens' fourth consecutive unanswered goal, a tap-in for an unmarked Donlan who was fed in the low slot by a pass from Brett Lisoway.

Donlan's goal set up a tense eleven minutes as a raucous crowd at The Rink Exchange but the Generals would close out the game and win by a final score of 7-6.

Christopher Alexakis earned his 20th win of the season, the third USP3HL goaltender to do so this season. His 20 wins trail only the 21 wins notched by Fabio Meier (FBJ) and Cayden Bailey (FBJ) for the most in the league.

Cody Arbelovsky's two goals tonight now puts him just one goal behind Michael Frei for most goals in a single season in Generals franchise history (46: 2008-09). He scored two goals in each of the two games against Seattle this weekend. 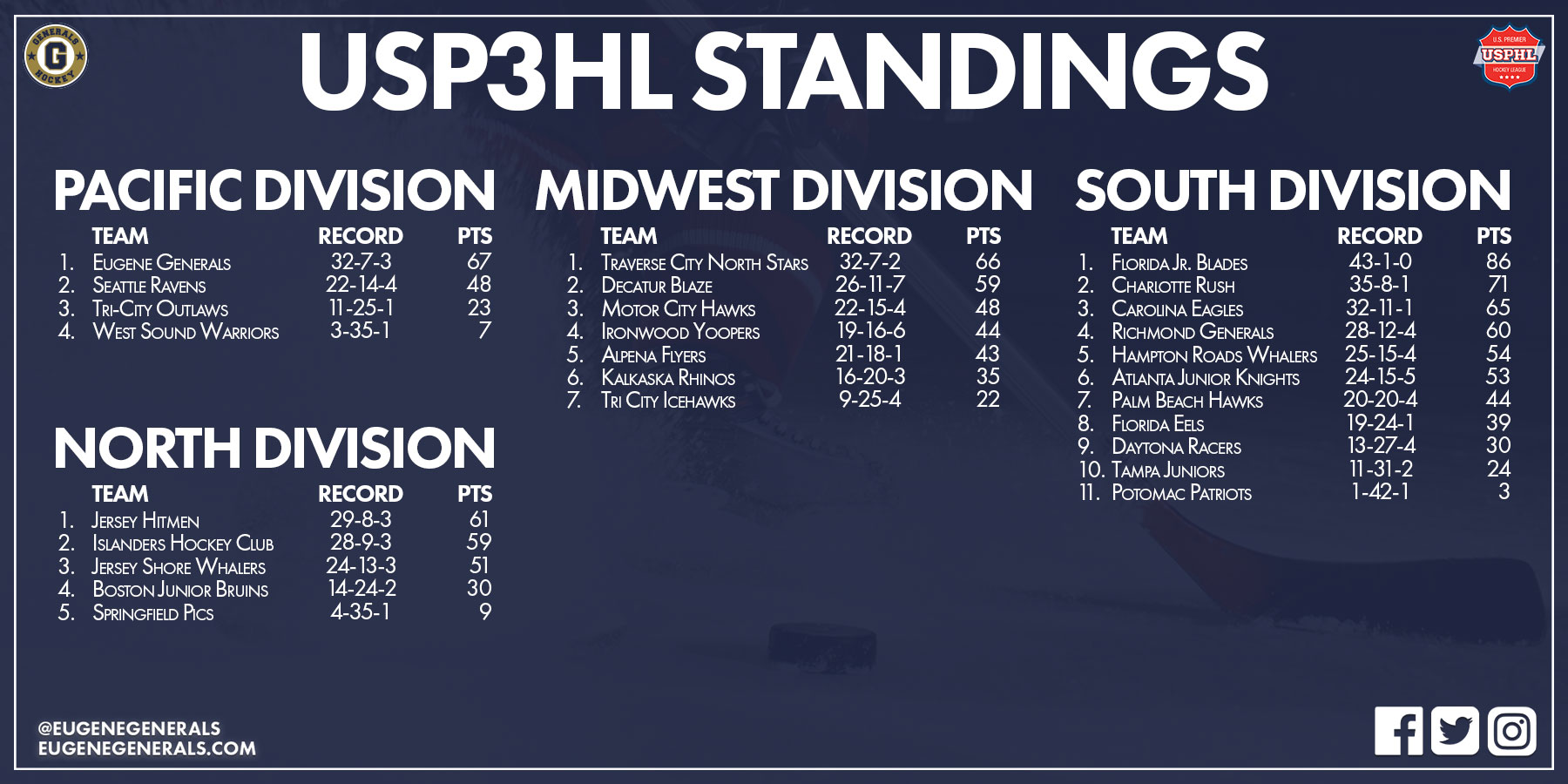 The robust South Division concluded their regular season schedule this past weekend as they'll now quickly transition to playoff-mode. Most of the division's playoff seeds had already been determined entering the final weekend of the regular season, however there were still some thrilling matchups in the Southeastern United States headlined by a pair of splits as Hampton Roads and Charlotte each took one game in their two-game series while Atlanta and Carolina each took two points from their matchup.

The South Division Playoffs begin this upcoming weekend as the division's top eight teams from the regular season will now progress to a quarterfinal round that will include a best-of-three series. Matchups for this weekend's USP3HL South Division playoffs are listed below:

Find a full schedule at USPHL.com and watch every USPHL Playoff game at HockeyTV.com.

In the Midwest Division, the streaking Motor City Hawks were slowed to a halt this past weekend as they ran into a brick wall in the from of the Traverse City North Stars. Having entered the weekend winning four of their previous five games, the Hawks were stomped by the Traverse City in a two-game series that saw T.C. outscore Motor City by a 21-7 margin. The North Stars finished the weekend with a 6-3 win on Sunday against the Kalkaska Rhinos. The Decatur Blaze finished out their regular season schedule by sweeping the Tri City Icehawks behind wins of 9-0 and 5-1 while the

In the North Division, the first place Hitmen stumbled against their in-state rivals as the two teams split a two-game series this past weekend thanks in part to a dramatic win by the Whalers on Friday that saw the game-winning goal scored with just two seconds left in regulation. Meanwhile, the Islanders Hockey Club took care of business in their only game of the weekend as they defeated the Boston Junior Bruins, 6-2. Their win now sets up a wild final weekend in the North Division that will see both I.H.C. and the Jersey Hitmen play four games in a 72 hour span, concluding with a two-game series against one another that could very well decide the division champion. Both teams have split their four previous meetings while each team has scored a total of 16 goals across those four games.

Sparks Shines As Star Of The Week 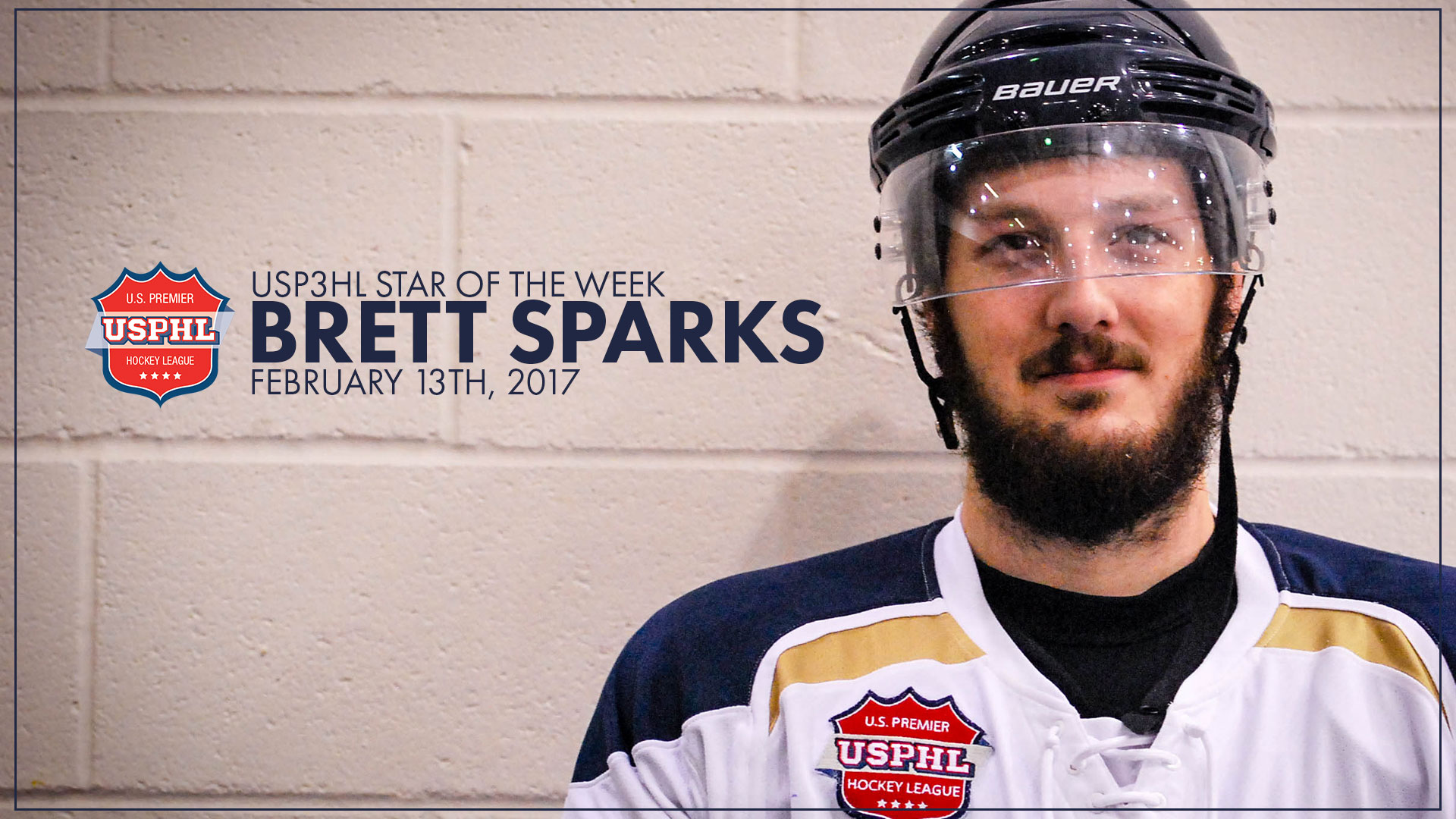 Arbelovsky Closes In On History

After scoring four goals over last weekend's two-game series against the Seattle Ravens, Generals forward Cody Arbelovsky is now just one goal behind Michael Frei's mark of 46 goals set in the 2008-09 season for the most goals score in a single season in franchise history. Arbelovsky will aim to tie or break the record on the regular season's final weekend as the Generals host the West Sound Warriors this Friday and Saturday at The Rink Exchange. He has been held scoreless by the Warriors just once in eight meetings this season while scoring a total fifteen goals across those previous matchups.

The schedule has officially been announced for the upcoming USP3HL Pacific Division Championship Series between the Eugene Generals and the Seattle Ravens. The matchup will be a best-of-three series and all three potential games will be played in Eugene, with the schedule listed below:

The winner of the best-of-three series will advance to Boston, Massachusetts where they will serve as the Pacific Division's representative at the USPHL Beantown Spring Classic which will host the USP3HL National Championship.

Tickets to Game One and Game Two of the USP3HL Pacific Division Championship Series are now available at EugeneGenerals.com.