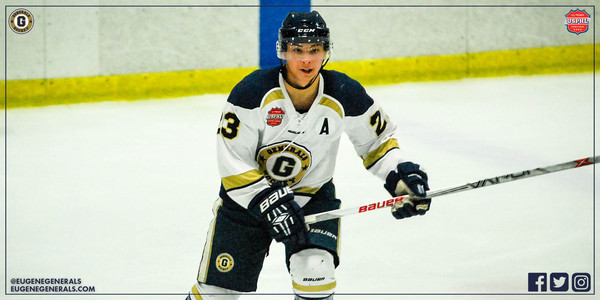 Eugene opened the scoring 3:50 into the first period with a Brett Sparks goal on the man-advantage, off assists from Josh Hawn and Logan Sanders. The tally was the defenseman’s 10th power play goal of the season, placing him alone in fourth in the USP3HL in that category.

Just over four minutes later, Payton Okon, a recent Tri-City acquisition for Seattle, sniped a wrist shot from the top of the circle to tie up the game. Neither team registered another goal during the opening frame, leaving the period knotted up at 1-1.

Eager to break the stalemate, less than two minutes into the second period, Eugene’s Cody Arbelovsky scored at even strength, assisted by Hawn and Brett Sparks. With Seattle goaltender Josh Stone out of position on the play, Arbelovsky buried his 42nd goal of the season at 1:50 to put the Generals ahead, 2-1. The goal put Arbelovsky within three of Michael Frei, who holds the Generals franchise record of most goals scored in a season (46, 2008-09), with three games left to play in the regular season.

Okon was once again up to the task for Seattle, as he tied the game at 2-2, 6:02 into the period. Okon took advantage of a broken play, seized the puck in the slot, and sunk another wrister past Generals netminder Christopher Alexakis.

Midway through the frame with Eugene’s Tristan Bulot in the box for slashing, Arbelovsky got his second of the night. The backhanded tally snuck past goaltender Stone and once more gave the home team the lead, 3-2.

The shorthanded goal would prove to be the game-winner, as Seattle was unable to recover. 2:39 into the third period on the power play, Colton Symbol skated to the point and collected a beautiful pass from Minnesota acquisition Jordan Szymanski. Symbol’s patience paid off as he directed the puck through the five-hole, putting the Generals up, 4-2. Adam Shimamoto earned the secondary assist.

Seattle made a late push towards the end of the period when Brett Lisoway made it a one-goal game with 6:01 remaining. Lisoway capitalized on a partial breakaway, chipping the puck beyond defenseman Logan Sanders in the defensive zone before slipping past Sparks and finding the net.

The Generals had the final say, with Sanders scoring the empty netter with five seconds left in the game and sealed the match by a final score of 5-3.

Stone made 20 saves on 24 shots tonight, while Alexakis stopped 29 of the 32 attempts he faced. Seattle went scoreless on their three power play attempts, and Eugene was 2-for-6.

The Generals and Ravens face off again in Eugene tomorrow night at 7:30pm PST in what will be their final head-to-head meeting of the regular season. Tickets are available for purchase at EugeneGenerals.com or at the Eugene Generals Box Office prior to puck drop at The Rink Exchange. Live video coverage will be available via the Eugene Generals Hockey Network while live updates will be provided on Facebook and Twitter.