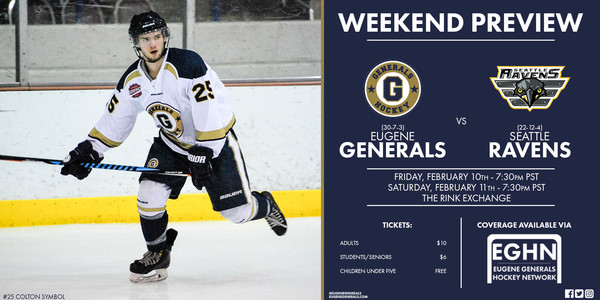 The Eugene Generals (30-7-3, 63pts) face off against the Seattle Ravens (22-12-4, 48pts) this Friday and Saturday at The Rink Exchange in Eugene, Oregon in what will be a preview of the upcoming USP3HL Pacific Division Championship Series. Friday's game marks Fan Appreciation Night as the Generals will be celebrating the best fans in the USPHL all evening long.

Entering this weekend, the Generals hold a 7-3-0 record vs. the Ravens this season, including a 3-0-0 record in games decided in overtime or a shootout. The Generals' success has not come easy, though, as six of their matchups against the Ravens have been decided by just one goal while eleven of twelve total games between the two teams has been decided by two goals or less.

In their most recent meeting, a two-game series in Washington just three weeks ago, the Generals and Ravens split the series while each game was decided by just one goal.

Having joined the Generals just three weeks ago, Szymanski will be making his home debut after sitting out during last weekend's games as a precaution due to a lower body injury. In his three games with the Generals, Szymanski has tallied one assist and previously suited up for Robbinsdale Cooper High School in New Hope, Minnesota.

Sanchez has been a one-man wrecking crew for Seattle this season as his 41 goals are tied with Generals forward Cody Arbelovsky for second overall in the USP3HL. Sanchez has tallied 16 overall points (7 goals, 10 assists) in 10 games vs. the Generals this season, however 11 of those 16 points have come over the four most recent meetings between the two teams.

Currently in his second season in Eugene, Bloemer has quietly been the driving force behind the Generals as the team is a perfect 15-0-0 this season in games that he has scored in. His eight game-winning goals currently lead the Eugene roster while placing third overall in the USP3HL.

Stone has done all of the heavy lifting in net for the Ravens this season as the veteran enters the weekend with a 14-5-2 record while ranking 10th* in the USP3HL with a .917 save percentage (minimum 800:00 minutes played).

What To Watch For

Generals forward Cody Arbelovsky's 41 goals this season are tied for second in Generals history with Ryan Schank (2005-06) for the most goals scored in a single season in Generals history. With four games still remaining in the regular season, Arbelovsky trails only Michael Frei's 46 goals during the 2008-09 campaign for single-season record for most goals in Generals franchise history. Earlier this season, Arbelovsky broke the Generals' single-game franchise record for goals scored with six against the West Sound Warriors on 9/23/16. Currently in his second season with the franchise, Arbelovsky is currently ranks second in the USP3HL in both overall points (77) and goals (41) while also ranking ninth in assists (36).

Despite boasting some of the league's most talented and top-scoring forwards, it's been Eugene's arsenal of defenseman that has piled up the points on the power play this season. Through 42 games, defenseman Brett Sparks currently ranks third overall in the USP3HL in power play goals with nine while fellow blue liner and team captain Logan Sanders comes in just behind with eight PPGs. As a team, the Generals current power play percentage of 27.5% ranks as the top mark in the USP3HL.

On Friday, the Generals will be once again honor the best fans in the USPHL as Fan Appreciation Night returns to The Rink Exchange. All fans that stay after the game will receive their own Generals team photo while every Generals player will be signing autographs following the game's final whistle. In-game activities and contests will take place all evening long in what is always one of the season's most anticipated nights of the year. Join the fun and rock the rink, get your tickets at EugeneGenerals.com

The Generals and Ravens face off on Friday, February 10th and Saturday, February 11th at The Rink Exchange in Eugene, Oregon with both games beginning at 7:30pm PST. Tickets are available at EugeneGenerals.com or at the Eugene Generals Box Office, located at The Rink Exchange. Live video coverage of both games will be available via the Eugene Generals Hockey Network (EGHN) starting at 7:00pm PST Live stats will be provided at USPHL.com while updates will be provided via Twitter.