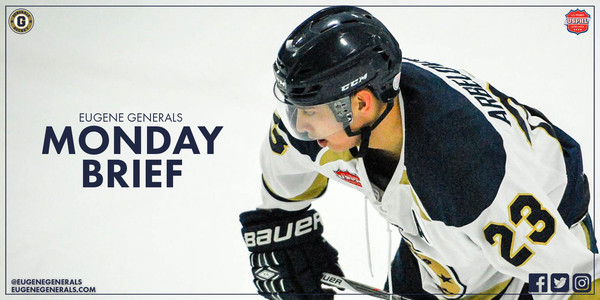 After completing a two-game sweep of the Tri-City Outlaws this past weekend, the Eugene Generals now prepare to open up a six-game homestand that will conclude the regular season with hopes of clinching the Pacific Division title as early as this upcoming weekend. 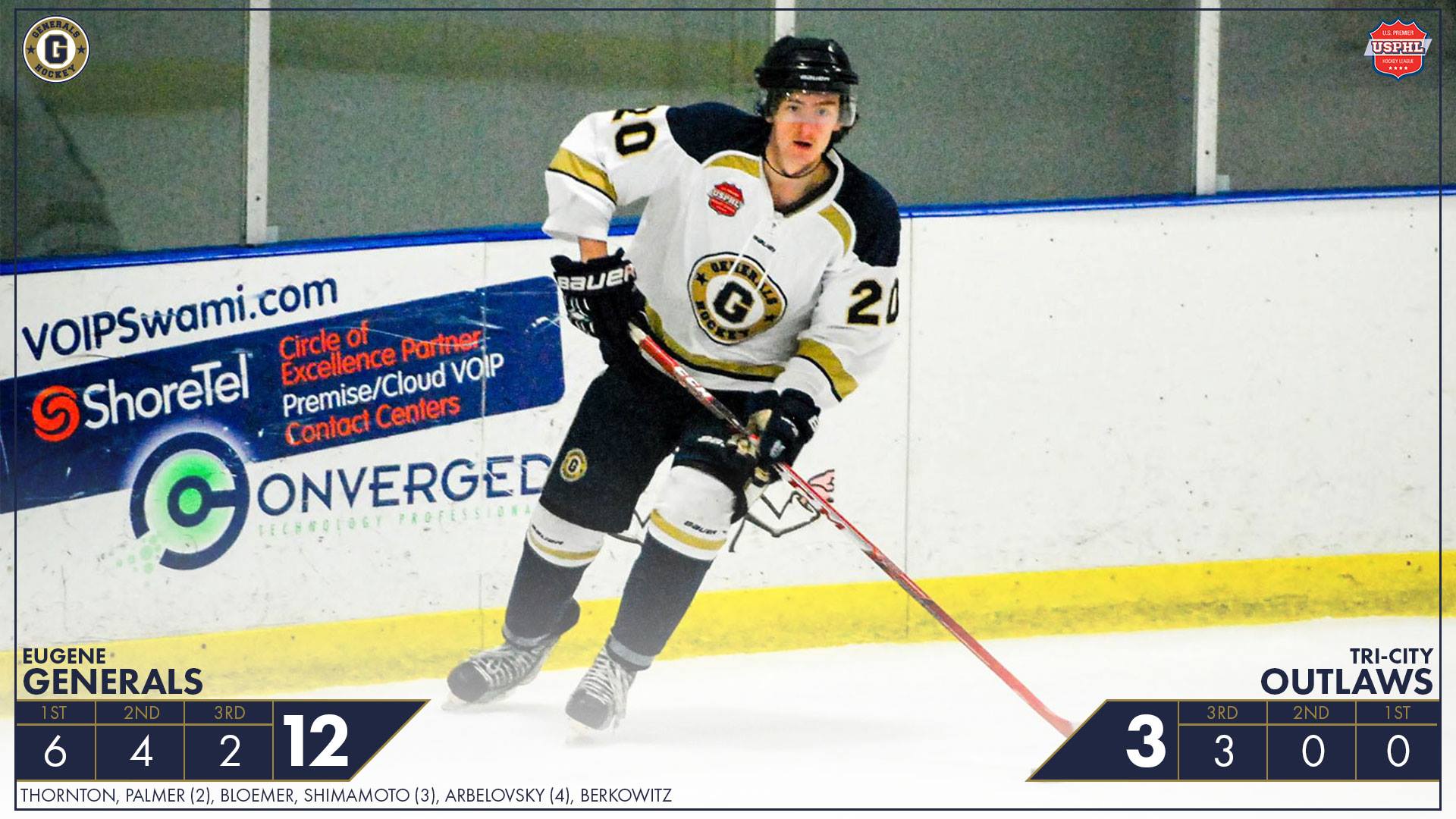 On Saturday, the Generals and Outlaws faced off in Kennewick, Washington in what would be the final series between the two teams this season, and it took only 97 for the Generals to take the lead as forward Jack Thornton opened the scoring with his 7th goal of the season. Kory Palmer soon followed by scoring his first two goals of the season in a three minute span, and ensuing goals from Cole Bloemer, Adam Shimamoto and Cody Arbelovsky would give Eugene a 6-0 lead at the break.

In the second period, goals from Cody Arbelovsky, Adam Shimamoto (2) and Nash Berkowitz would extend the Eugene lead up to 10-0, and two more goals from Arbelovsky in the third period would give Eugene an impressive 12-3 win as the Outlaws would score a trio of late consolation goals. 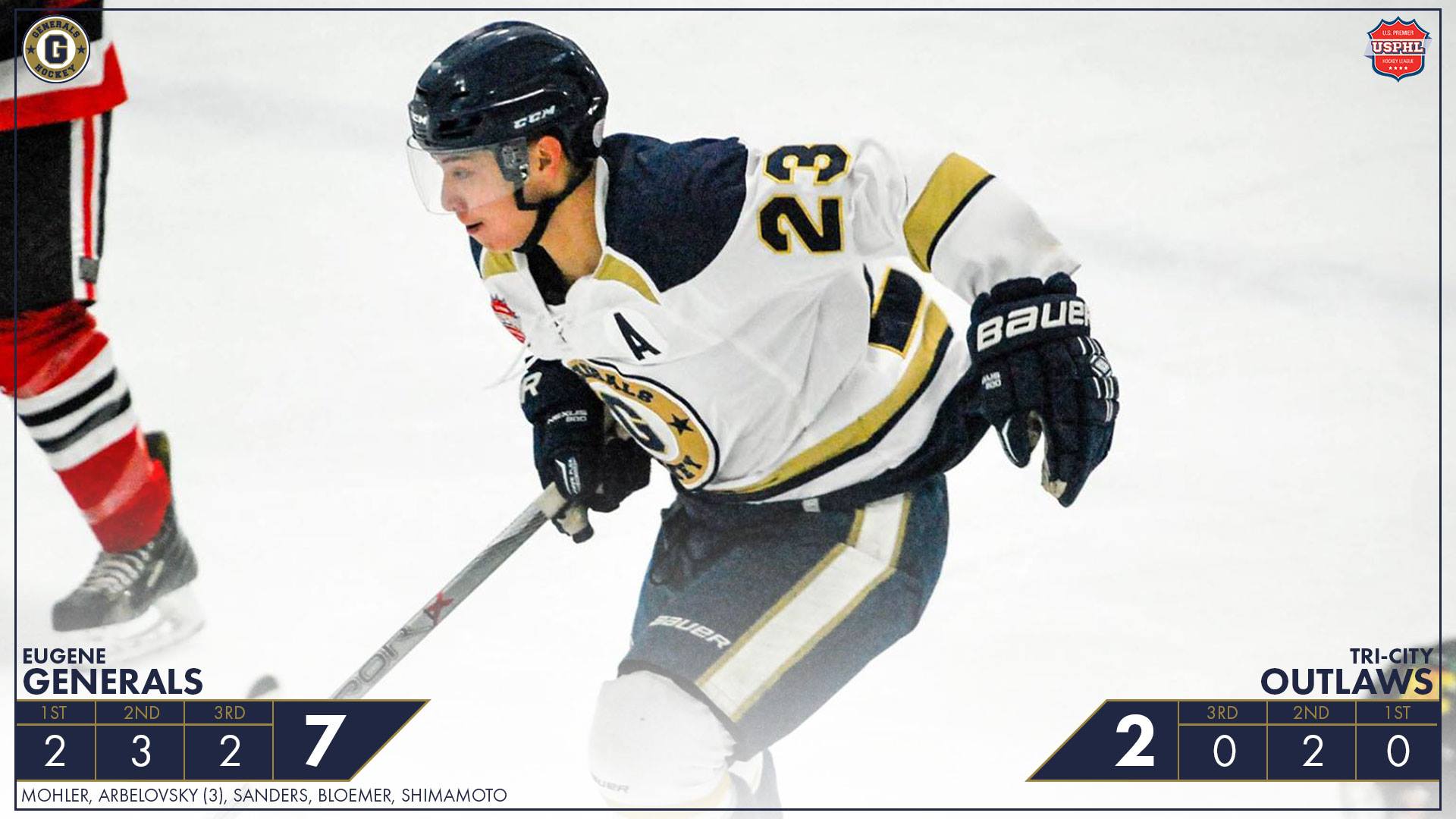 A shorthanded goal by Generals team captain Logan Sanders just 76 seconds into the period gave the Generals a 3-0 lead, and Outlaws forward Kalen Campbell's goal at the 8:33 mark was cancelled out just 81 seconds later as Arbelovsky scored his second goal of the game to put Eugene back ahead by three. Generals forward Cole Bloemer scored his 21st goal of the season with less than five minutes left in the period to put Eugene ahead, 5-1, but T.C. forward Erik Johnson cut it back to a three-goal game at the 17:16 mark with his first goal as an Outlaw.

Midway through the third period, Arbelovsky completed his hat trick at the 8:38 mark, his seventh goal of the series, and forward Adam Shimamoto would cap off the scoring just under three minutes later as the Generals would win, 7-2.

Goaltender Christopher Alexakis stopped all seven shots faced in the first period while Jamie Frantz stopped 16 of 18 shots faced as he played in net for the the second and third periods and earned the win. 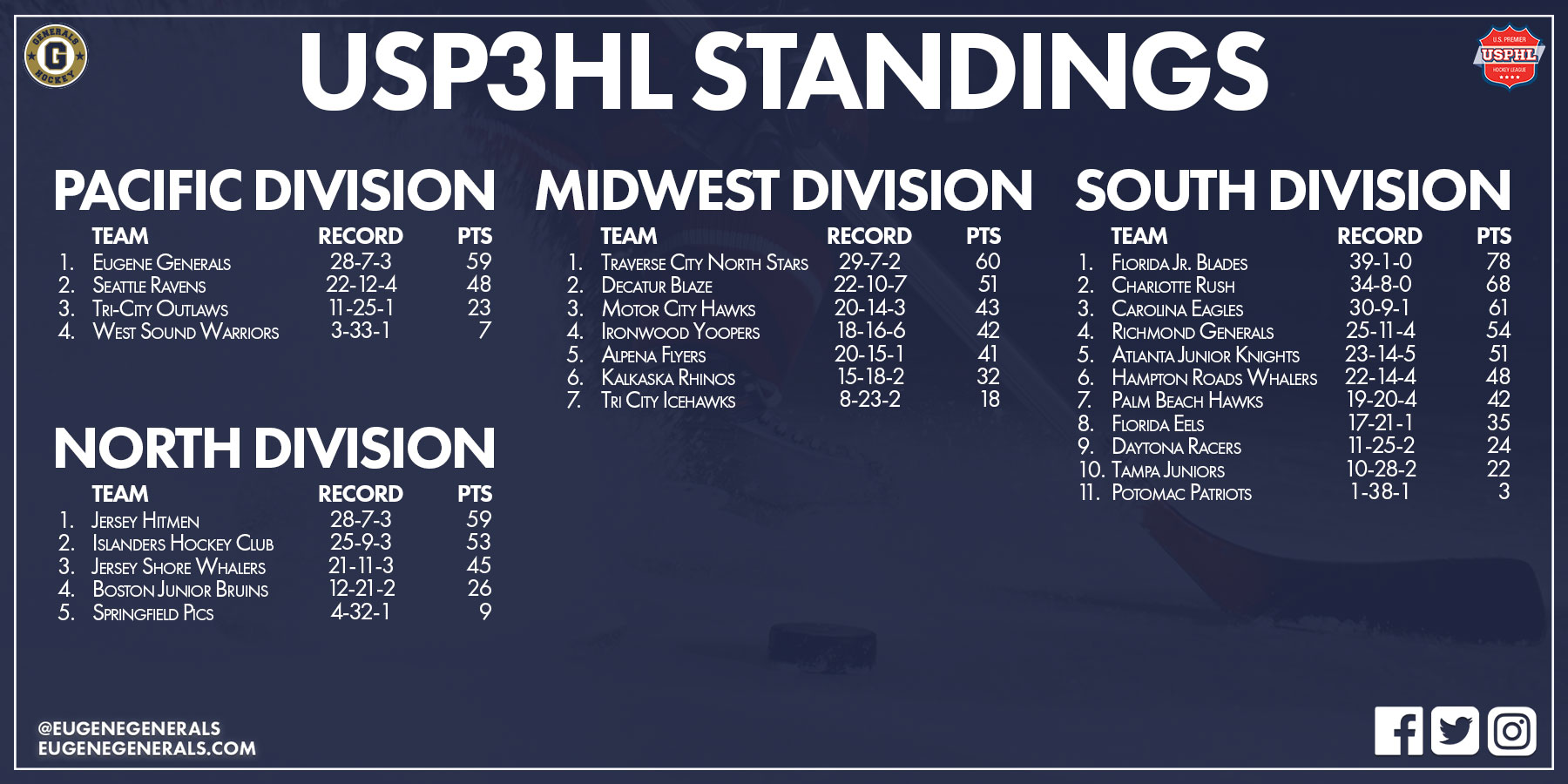 In the South Division, the weekend's most anticipated matchup proved to be a one-sided affair as the second place Charlotte Rush swept a two-game series over the Carolina Eagles with wins of 6-1 and 7-4, respectively. Meanwhile, the Florida Jr. Blades officially clinched the top seed in the upcoming South Division Playoffs after downing a plucky Daytona team by a final score of 5-3 on Saturday before finishing off a sweep of the Racers on Sunday with a 9-0 win. In another series with massive playoff implications, the Richmond Generals took both games of a hard fought two-game series against the Hampton Roads Whalers behind a narrow 3-1 win on Saturday and a dramatic, 4-3 overtime win on Sunday despite being outshot by a 41-19 margin. The Palm Beach Hawks clinched a spot in the South Division Playoffs after a pair of impressive 4-3 wins over the Atlanta Junior Knights, and the Tampa Juniors took both games of a home-and-home series against the Florida Eels. The Potomac Patriots also picked up their first win of the season this past weekend as they split a two-game series with the Boston Junior Bruins.

In the North, Jersey Shore was eliminated from contention for the top spot in the division after they lost both games of a two-game series vs. the Islanders Hockey Club, but I.H.C. was unable to gain ground on the first place Hitmen as Jersey swept their two-game series against the Springfield Pics.

In the Pacific, second place Seattle kept their faint hopes of finishing in first place alive as they took care of business against West Sound with a pair of dominant wins, outscoring the Warriors by a 20-1 margin over the two-game series.

After scoring seven goals in the team's two-game series vs. the Tri-City Outlaws this past weekend, Arbelovsky pulled himself into a tie with Tyler Tymchuck (2006-08) for third all-time in Generals franchise history for goals scored in a single season (40) while also passing Ryan Schank (2005-07) for sole possession of fifth all-time in Generals franchise history for overall points in a single season (76).

Through 36 games played this season, Arbelovsky's 40 goals and 76 overall points both currently rank second overall in the USP3HL.

In total, one (1) Pacific Division team, one (1) North Division team, two (2) Midwest Division teams and two (2) South Division teams will have the opportunity to participate in the Beantown Spring Classic which will determine the USP3HL champion. Each division will hold their own respective playoff before teams can then move on to the New England Sports Center in Marlborough, Massachusetts. There, the six teams in attendance will be divided into two pools to play in a "round robin" format.

If the playoffs began today using the current USP3HL standings, the two pools would look like the following:

Following round robin play, the #1 and #2 teams from each pool would cross over and play one another before advancing on to a best-of-three championship round.