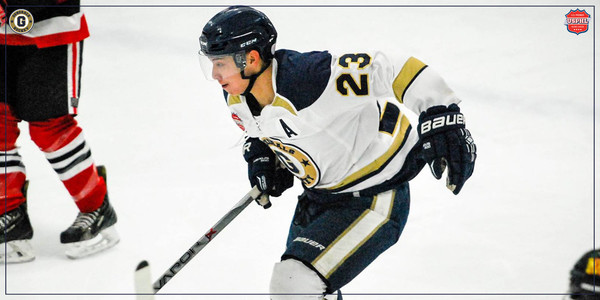 After winning comfortably by a 12-3 margin the night before, the Generals faced off against the Outlaws again with Eugene looking to take another step towards a potential regular season Pacific Division title.

In the second period, team captain Logan Sanders quickly added to the Generals lead just 76 seconds into the period as he scored with the Generals shorthanded, his 16th goal of the season. Tri-City would respond just over seven minutes later as Kalen Campbell cut the T.C. deficit back to two, but Eugene's three-goal advantage was restored just 81 seconds later as Arbelovsky scored his second goal of the game. Generals forward Cole Bloemer scored his 21st goal of the season with less than five minutes left in the period to put Eugene ahead, 5-1, but T.C. forward Erik Johnson cut it back to a three-goal game at the 17:16 mark with his first goal as an Outlaw.

Midway through the third period, Arbelovsky completed his hat trick at the 8:38 mark, his seventh goal of the series, and forward Adam Shimamoto would cap off the scoring just under three minutes later as the Generals would win, 7-2.

With his hat trick this evening, Arbelovsky moves into a tie with Tyler Tymchuck (2006-08) for third all-time in Generals franchise history for goals scored in a single season (40) while also passing Ryan Schank (2005-07) for sole possession of fifth all-time in Generals franchise history for overall points in a single season (76).

Goaltender Christopher Alexakis stopped all seven shots faced in the first period while Jamie Frantz stopped 16 of 18 shots faced as he played in net for the the second and third periods. The Generals finished the game having outshot the Outlaws, 56 to 25.

The Generals will now head home before opening up a six-game homestand at The Rink Exchange starting with a matchup vs. the West Sound Warriors on Friday, February 3rd at 7:30pm PST and Saturday, February 4th at 7:30pm PST. Tickets are available at EugeneGenerals.com or in-person immediately before every home game at the Eugene Generals Box Office, located at The Rink Exchange. Video coverage of both games will be available via the Eugene Generals Hockey Network (EGHN) with updates provided via Twitter.