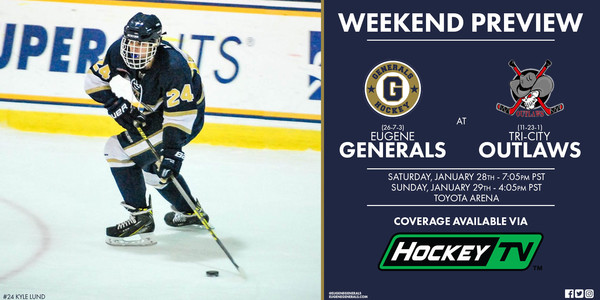 The Eugene Generals (26-7-3, 55pts) wrap up a six-game stretch of road games this weekend with a two-game series against the Tri-City Outlaws (11-23-1, 23pts) in Kennewick, Washington. Facing off against one another for the final time this season, the two teams will hit the ice at Toyota Arena on Saturday, January 28th at 7:05pm PST and Sunday, January 29th at 4:05pm PST.

The Generals will enter this weekend's matchup with a 9-0-1 record vs. the Outlaws this season while outscoring T.C. by a 53-24 margin in the process. Just one week ago, the Generals acquired the Outlaws' top point scorer, Adam Shimamoto, an acquisition that came just two weeks after fellow former Outlaw Colton Symbol also joined the Generals.

Last weekend, a shorthanded Generals squad split a two-game series against the second place Seattle Ravens after winning Friday's matchup in overtime, 4-3, before falling the next night, 3-2.

As the regular season continues to wind down, the Generals currently hold an eleven-point lead over the second place Seattle Ravens in the Pacific Division standings with just eight games remaining. The Generals will have a chance to clinch the regular season Pacific Division title this upcoming weekend but they'll need some help to do so. Not only will the Generals need to win both games against the Tri-City Outlaws, but they'll also need the Ravens to lose at least one of their two games this weekend against last place West Sound. If Seattle sweeps their two-game series then the Generals will have to wait until the following weekend where they'll have a chance to clinch the regular season division title on home ice.

Meanwhile, the Outlaws come into the weekend matchup having snapped a four-game skid last weekend with a thrilling 9-8 win over the West Sound Warriors, however the win was only the team's second in eight previous games.

The Generals return home next week to begin a six-game homestand that will conclude the regular season starting with a two-game series vs. the West Sound Warriors on Friday, February 3rd and Saturday, February 4th. Tickets to all Generals home games are available online at EugeneGenerals.com or in-person immediately before each home game at the Eugene Generals Box Office, located at The Rink Exchange.