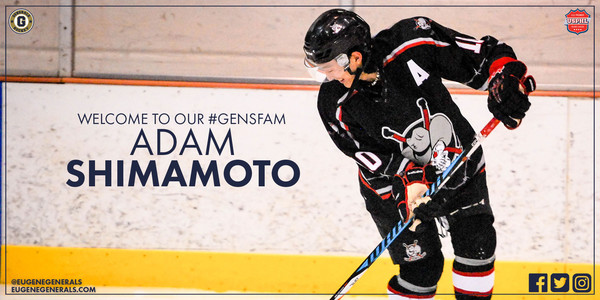 The Eugene Generals (26-7-3, 55pts) have acquired forward Adam Shimamoto from the Tri-City Outlaws for undisclosed terms.

A native of Colorado, Shimamoto comes to Eugene with three seasons of junior hockey experience already under his belt, all of which have been with the Tri-City Outlaws. During his time with the Outlaws organization, Shimamoto tallied 58 goals and 64 assists for 122 overall points in 100 career games.

Shimamoto is the third player that the Generals have added in just three weeks after the franchise previously acquired forward Colton Symbol - also from the Tri-City Outlaws - before adding defenseman Jordan Szymanski earlier this week.

Known as a leader on and off of the ice, “Shimmy” is credited not just as a prolific point-getter but also as one of the division’s most respected players for his conduct with teammates and opponents alike. Entering this weekend, Shimamoto ranked T-19th overall in the USP3HL in goals, T-20th in assists and 14th in points.

"It's wonderful to be able to add a player of his quality with the playoffs now just one month away," said Generals Head Coach Justin Kern. "He's a high character kid with skills to match and we're very excited to welcome him in to our Generals family."

Currently sitting in first place, the Generals hold an eleven-point lead over the second place Seattle Ravens with just eight games left in the regular season. If the current standings hold through the rest of the regular season, the Generals and Ravens would face off in a best-of-three series to decide the Pacific Division's representative at the USP3HL Playoffs in Boston, Massachusetts. After joining the team just before Saturday's game against the Seattle Ravens, Shimamoto will now head to Eugene with the Generals before the team prepares for a two-game series vs. the Tri-City Outlaws next weekend in Kennewick, Washington.

Tickets are available online at EugeneGenerals.com or by visiting the Eugene Generals box office immediately before each home game, located at The Rink Exchange. Remember to follow the Generals on social media for more updates, information, and behind-the-scenes content throughout the 2016-17 season and beyond.