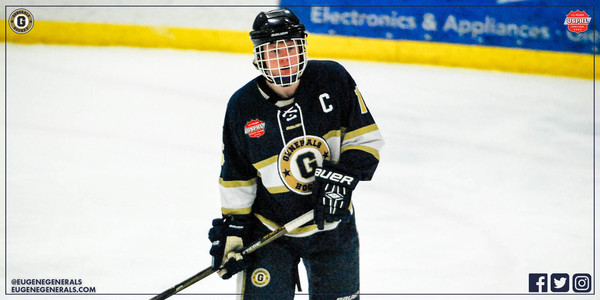 Less than 24 hours removed from defeating the Ravens in a shootout, 4-3, the Generals took the ice again at the Kent Valley Ice Centre looking to sweep the two-game series.

For the second straight night, both sides were scoreless after twenty minutes of play as the Generals outshot the Ravens, 15-8, but neither side was able to find the twine.

In the second period, the scoreless stalemate continued until the 13:01 mark as Seattle forward John Nauman scored to give Seattle a 1-0 lead. Just over three minutes later, Nauman would strike again as the big forward's pair of goals put the Ravens ahead, 2-0. However, the two-goal lead for Seattle wouldn't make it to the intermission as Generals captain Logan Sanders scored a power play goal from the high slot to cut Eugene's deficit back to just one heading into the break.

In the third period, Seattle restored their two-goal lead at the 11:37 mark as second year forward Andrew Bell scored his 21st goal of the season, but it was back to a one-goal game exactly four minutes later as Colton Symbol scored his sixth goal in four games since joining the Generals to make it a 3-2 game. A pair of Generals power plays in the final five minutes yielded a handful of chances but Seattle netminder Josh Stone stood strong as the Ravens held on for a 3-2 win to split the two-game series.

Despite earning the loss, Generals goaltender Christian Zecchetto put forth a stellar effort in net as the Italian stopped 35 of 38 shots, a mark bested only by his 36-save performance in the Generals' thrilling 3-2 shootout win over the Ironwood Yoopers at the USPHL Midwest Showcase.

Despite the loss, the Generals finish the regular season with a 4-1-1 record against Seattle at the Kent Valley Ice Centre. The two teams will face off for one final regular season series in Eugene on Friday, February 10th and Saturday, February 11th at The Rink Exchange. The two teams have already clinched a spot in the USP3HL's Pacific Division Championship Series, however seeding has still yet to be determined.

The Generals now return home for a week of practice before traveling to Kennewick, Washington for a Saturday-Sunday series next weekend, the final two games of their current six-game roadtrip.

Following the trip to Kennewick, the Generals will finish the regular season with six consecutive games on home ice starting with a two-game series vs. the West Sound Warriors on Friday, February 3rd at 7:30pm at The Rink Exchange. Tickets to all Generals home games are available at EugeneGenerals.com or in-person immediately before home games at the Eugene Generals Box Office, located at The Rink Exchange.