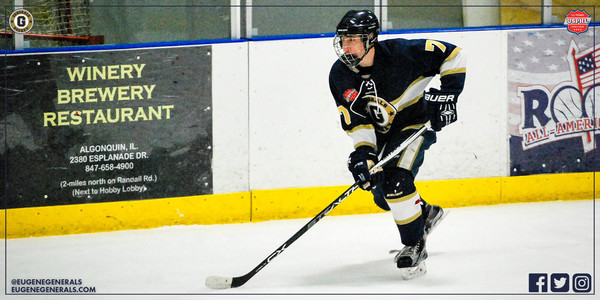 Playing for the ninth time against one another this season, the Generals and Ravens kicked off a two-game series in Kent, Washington as the Generals entered the weekend aiming to clinch the Pacific Division regular season title with a pair of regulation wins.

After a scoreless first period, the Generals struck twice in quick succession early in the second period to take a two-goal lead as forwards Frazier Mohler and Cody Arbelovsky each scored within 62 seconds of one another. Generals defenseman Jordan Szymanski, making his team debut, tallied an assist on Arbelovsky's goal, his first career point as a General. However, the Ravens responded with a pair of power play goals as Tom Speer first scored at the 9:14 mark to cut the Seattle deficit to just one goal before new addition Kraig Smith followed just over four minutes later.

Still tied at 2-2 with less than five minutes left in regulation, Seattle forward Braden Sanchez scored the Ravens' first even strength goal of the game as he snuck a shot past Generals goaltender Christopher Alexakis to give Seattle their first lead of the game. That lead would almost last to the buzzer until Generals forward and assistant captain Josh Hawn scored with less than a minute left in regulation to tie the game at 3-3 and force overtime.

After a tense but scoreless overtime period, the two sides went to a shootout for the second time this season, the first of which was won by the Generals back on October 21st in Eugene. The first skater for each team - Colton Symbol (EUG) and Payton Okon (TRI) - each scored a highlight reel goal, but the ensuing five rounds saw the goaltenders showcase their skills as neither side could net a game-winner. Finally, in the seventh round, Eugene forward Tristan Bulot buried a beautiful finish over the shoulder of Ravens goaltender Josh Stone and Alexakis responded with a save on the following shot to secure the win and the two points.

Alexakis finished with 44 saves on 47 shots to earn his 17th win of the season while Arbelovsky scored his team-leading 34th goal of the season.

This was the third game this season between the two teams that was decided in overtime or a shootout, all of which have been won by the Generals, who now improve to 7-2-0 against the Ravens this season. However, the point claimed by Seattle in their shootout loss means the Generals will have to wait until at least next weekend to potentially clinch the Pacific Division regular season title.

The two sides face off again on Saturday, January 21st at 6:35pm PST on HockeyTV with live updates provided at USPHL.com. Remember to follow the Generals on Facebook and Twitter for in-game updates, information, and behind-the-scenes content.