Weekend Preview - Generals Journey To Seattle With Chance To Clinch 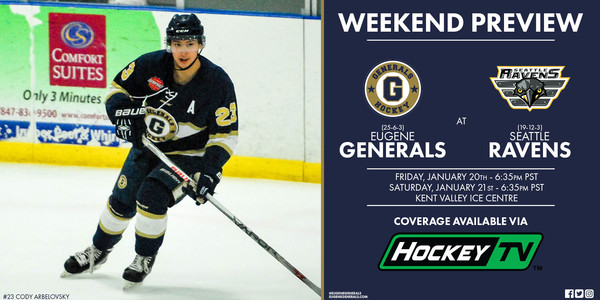 Facing off for the ninth and tenth times this season, the Generals have posted a 6-2-0 record against second place Seattle while holding a 12-point lead over the Ravens in the Pacific Division standings.

Both teams will look a bit different since the last time the two sides faced off (December 9th, 2016) as the Generals have since acquired forward Colton Symbol from the Tri-City Outlaws while also signing defenseman Jordan Szymanski. Conversely, the Ravens have recently acquired forward Payton Okon and defenseman Kraig Smith both from the Tri-City Outlaws.

This weekend's two-game series will be the season's most important series to date as the Ravens will have a chance to cut their deficit in the standings to just eight points with eight games to go. Meanwhile, four points in regulation for Eugene this weekend would clinch first place in the Pacific Division as the Generals would hold a 16-point lead with eight games to go while also owning the head-to-head tiebreaker over the Ravens.

With just ten games remaining in the regular season, the Generals currently hold one of the top point totals in the USP3HL while their 174 total team goals are only surpassed by the Florida Jr. Blades (229) and the Traverse City North Stars (180).

Bloemer has been the bellwether for the Generals this season as the team is undefeated (12-0-0) when Bloemer scores. Last Saturday, Bloemer netted his first hat trick of the season in the Generals' 12-1 thumping of the Warriors in Bremerton, Washington.

Recently acquired from Tri-City, the former Outlaws captain put a hurting on his old squad last weekend as he netted four goals in his Ravens debut, a 12-0 rout. In ten previous games against the Generals this season, Okon has tallied four goals and four assists for eight total points.

Tabbed as the team's primary netminder this season, Alexakis has not disappointed in his first year with the Generals as the Anchorage native is currently third in the USP3HL in wins (16), sixth in save percentage* (.931), and eleventh in goals against average* (2.12).

In the midst of his final season of junior hockey eligibility, Stone is posting the best numbers of his career as the Washingtonian has amassed 13 wins and an impressive 2.76 goals against average. Stone enters the two-game series with a 2-2-1 vs. the Generals this season, the only two wins that Seattle has tallied against Eugene this season.

The puck drops against the Seattle Ravens at 6:35pm PST on both Friday, January 20th and Saturday, January 21st with live video coverage available via HockeyTV. The Generals home schedule resumes on Friday, February 3rd against the West Sound Warriors, the first of six consecutive home games to finish the regular season. Tickets can be purchased online at EugeneGenerals.com or in-person immediately before each home game at the Eugene Generals Box Office, located at The Rink Exchange.