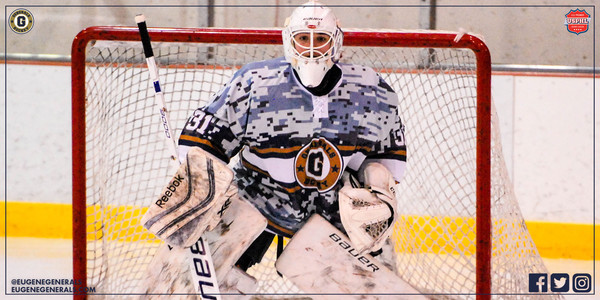 With the Generals having returned from their holiday break, the home stretch of the regular season has officially begun as the team took care of business on home ice while also making a major addition to the roster. 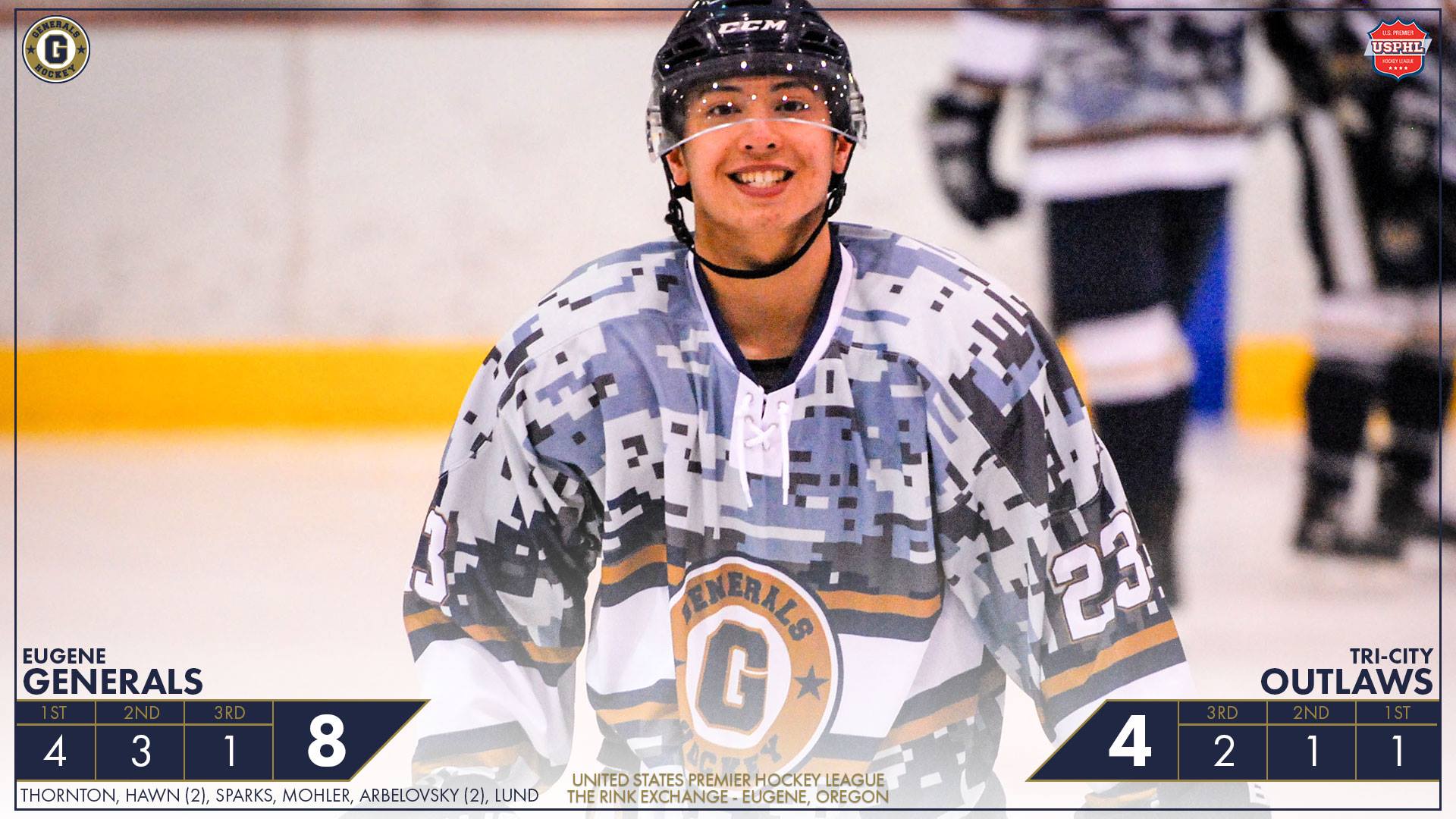 On Friday, the regular season resumed as the Tri-City Outlaws rolled in to Eugene to kick off a two-game series at The Rink Exchange. Showing few signs of rust, the Generals cruised to an 8-4 win behind goals from Jack Thornton, Josh Hawn (2), Brett Sparks, Frazier Mohler, Cody Arbelovsky (2) and Kyle Lund. Generals goaltender Christopher Alexakis stopped 30 of 34 shots faced as he earned his 15th win of the season, a mark that places Alexakis at third overall in the USP3HL in wins.

In addition to starting the home stretch of the season this past Friday, the Generals also celebrated Military Appreciation Night as the team donned one-of-a-kind camouflage jerseys to honor the brave men and women of our nation's armed forces. Those very game-worn camouflage jerseys are now available for purchase via online auction, which concludes at 12:00pm PST on January 19th, 2017. Proceeds from the online auction will go towards benefitting local veterans foundations and organizations. 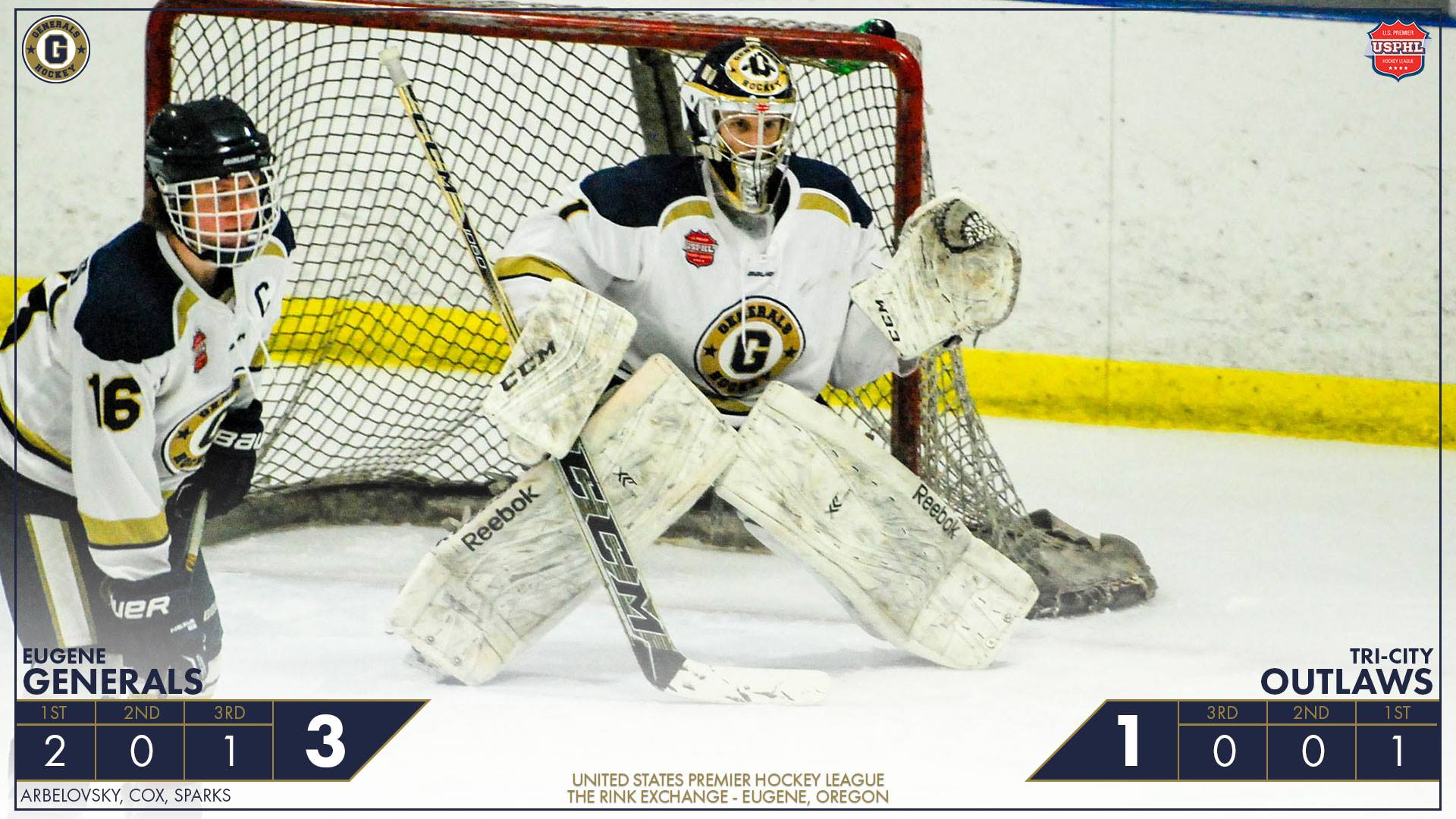 On Saturday, the Generals and Outlaws again faced off as Italian import Christian Zecchetto was tasked with making his eighth start of the season in net. Despite outshooting the Outlaws by a 54-21 margin, Outlaws goaltender Jimmy Grosklaus stood on his head to keep the T.C. deficit at just one for the majority of the game, but defenseman Brett Sparks' late goal provided some much appreciated insurance for the Generals as they completed the sweep of the two-game series behind a 3-1 win.

Zecchetto finished the game with 20 saves on 21 shots faced while Sparks' strike was his 18th goal of the season, tops among all USP3HL defensemen. Meanwhile, goals from both Arbelovsky and Baxter Cox ensured that the two remained in the top ten in the USP3HL in overall points. 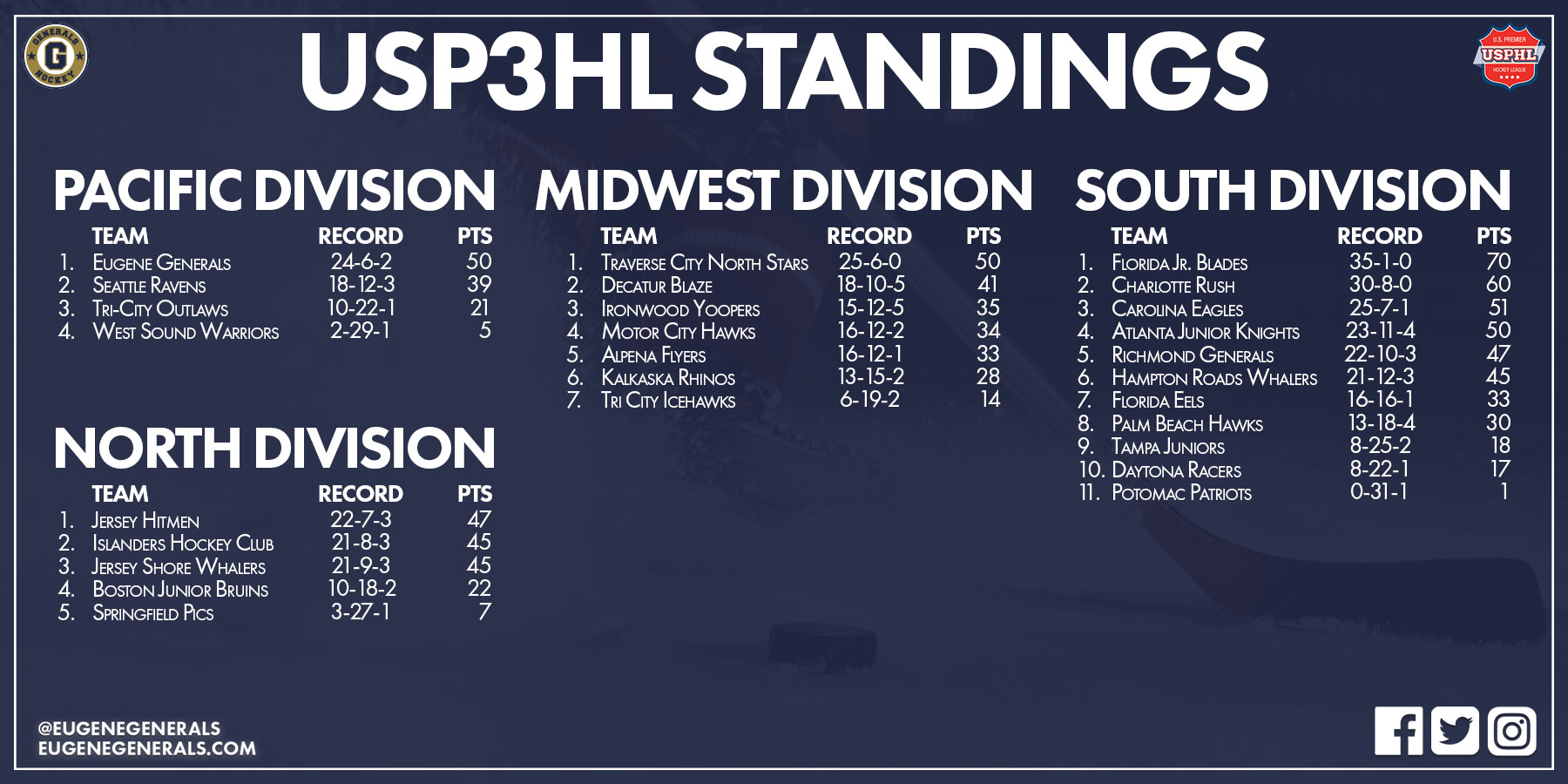 In the Midwest, the Ironwood Yoopers handed Traverse City their third and fourth consecutive losses on Friday and Saturday before the North Stars snapped their skid on Sunday with a 6-1 win over the Yoops. Despite the uncharacteristic losing stretch from Traverse City, they still lead the division by a comfortable margin while Decatur, Ironwood, Motor City and Alpena all continue to lurk within eight points of one another.

Meanwhile, the Winter Showcase took place this past weekend in Marlborough, Massachusetts as various teams from the Midwest, North and South Divisions hit the ice at the New England Sports Center.

South Division powers Florida and Charlotte continued to roll as they each posted perfect 4-0-0 records while in Massachusetts, the only two teams in attendance to do so. Meanwhile, Carolina, Hampton Roads, Jersey, Jersey Shore and Richmond each posted three wins in four tries. The Hitmen's solid performance put them back atop the North Division after the Islanders Hockey Club suffered a pair of losses at the Winter Showcase. 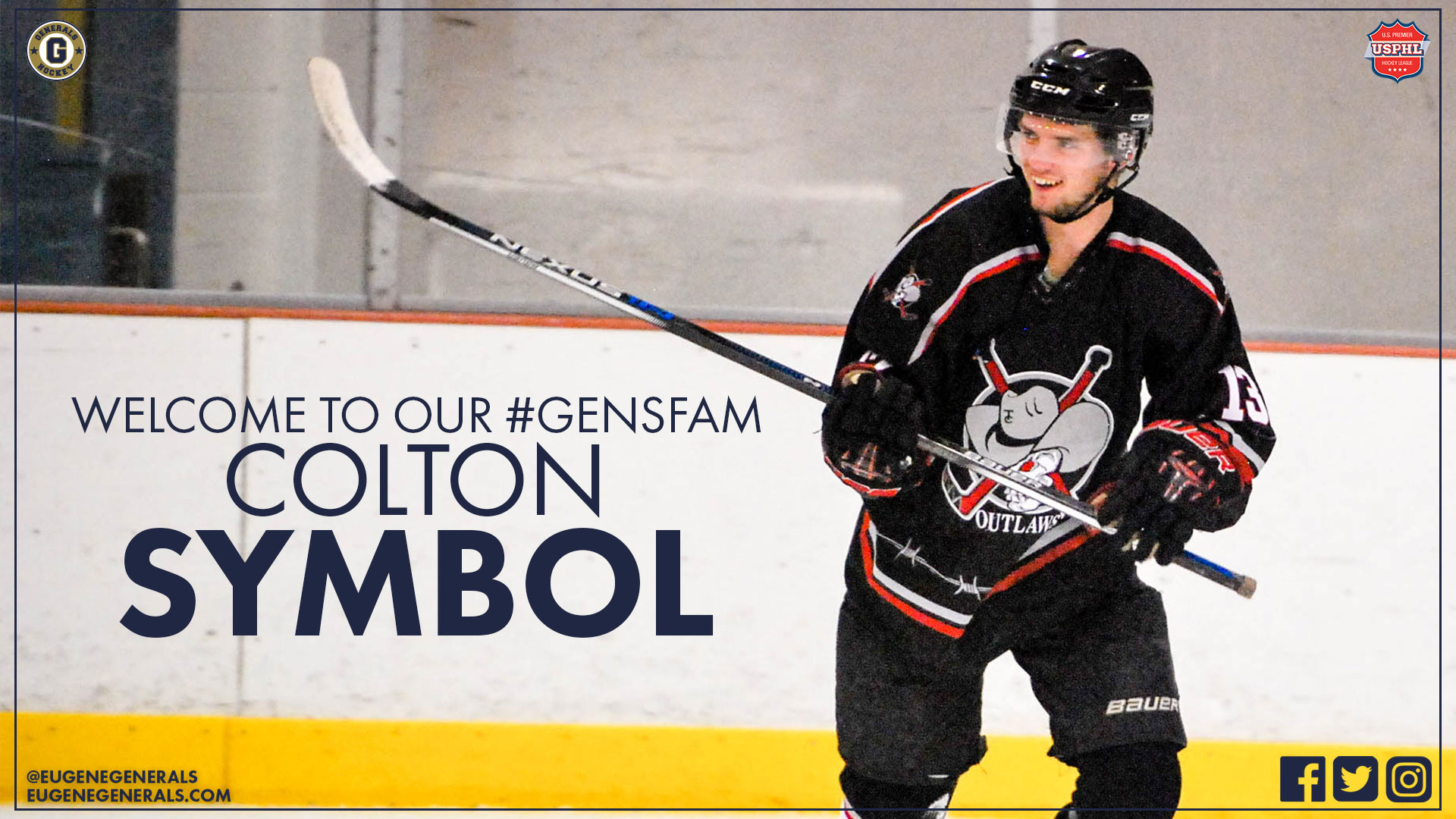 On Saturday, the Eugene Generals officially announced the acquisition of forward Colton Symbol from the Tri-City Outlaws for undisclosed terms.

Currently in his final year of junior hockey eligibility, Symbol was in the midst of his second season with the Outlaws organization before the Generals made the move to add the talented goal scorer and distributor. Over 55 career games played with Tri-City, Symbol tallied 37 goals and 64 assists for 101 overall points.

Having played in 21 games with the Outlaws this season, Symbol comes to Eugene with 13 goals and 41 overall points while ranking in the top ten in the USP3HL in assists with 28. According to Tier3JuniorHockey.com, Symbol ranked 76th in overall points among over 3000 Tier III players across the country.

“Symbol is a player that we are very familiar with as we actually tried recruiting him before last season” said Kern. "With the postseason fast approaching, we wanted to send a message to both the league and our players that we have aspirations beyond just a Pacific Division crown, and I think that this move reinforces that message. I have no doubt that he'll be a great addition to our lineup and I look forward to seeing him mesh with the rest of the team over the coming days and weeks."

Symbol will make his Generals debut this weekend as the team will travel to Bremerton, Washington to play a two-game series against the West Sound Warriors starting on Friday, January 13th and concluding on Saturday, January 14th. Both games start at 7:35pm PST while video coverage will be provided via HockeyTV. Symbol is slated to make his home debut on Friday, February 3rd vs. the West Sound Warriors, the first of a six-game homestand that will wrap up the USP3HL regular season.

With more news of roster additions expected in the coming weeks, stay tuned to EugeneGenerals.com and follow the Generals on Facebook and Twitter for updates, information and breaking news. 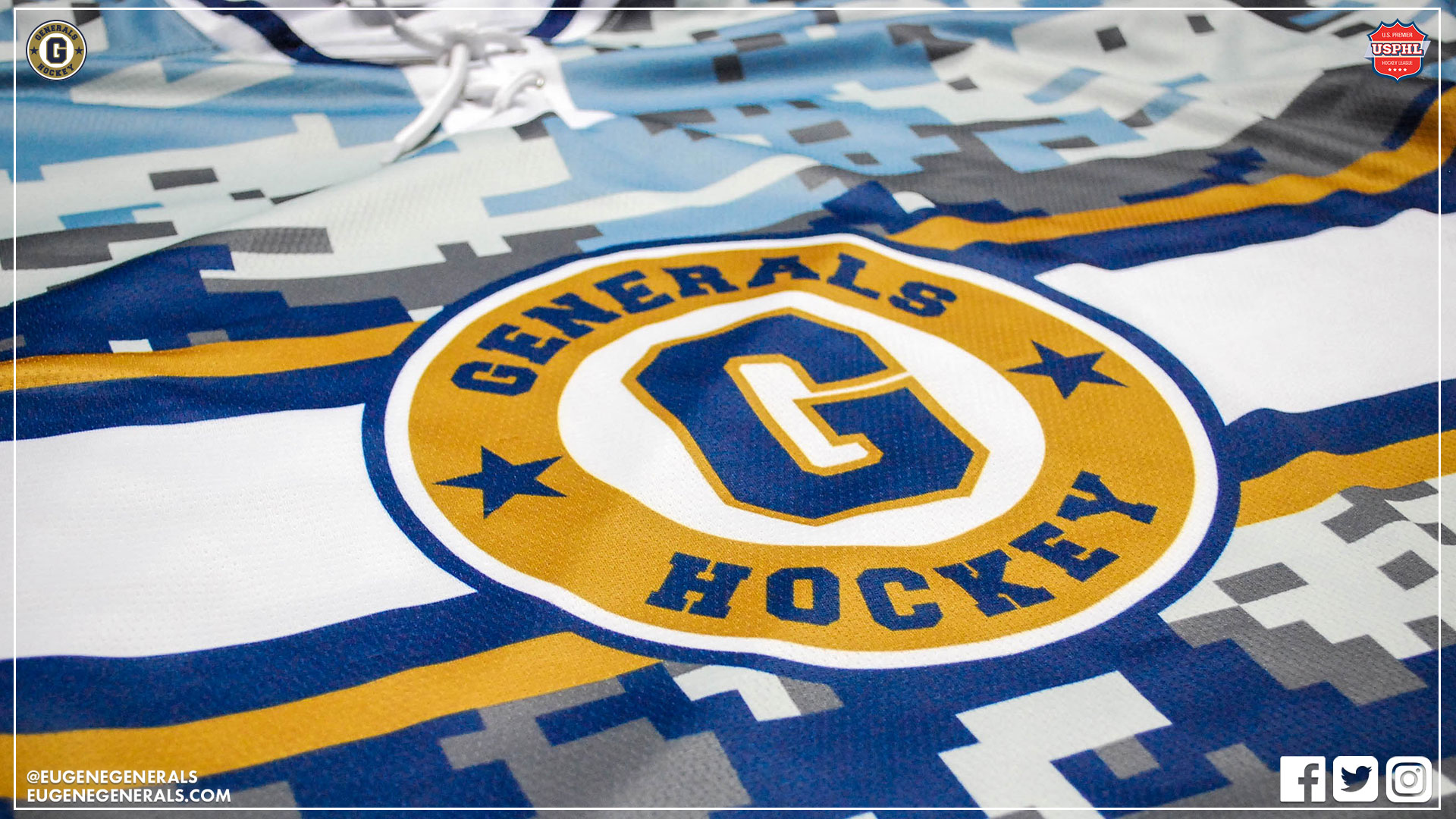 The Eugene Generals are proud to announce the 2017 Military Appreciation Night Camouflage Jersey Auction, hosted by eBay. The auction will start on January 9th, 2017 at 12:00pm PST and will complete on December 19th, 2017 at 12:00pm PST. Proceeds from the 2017 Military Appreciation Night Jersey Auction will benefit local veterans foundations and organizations.