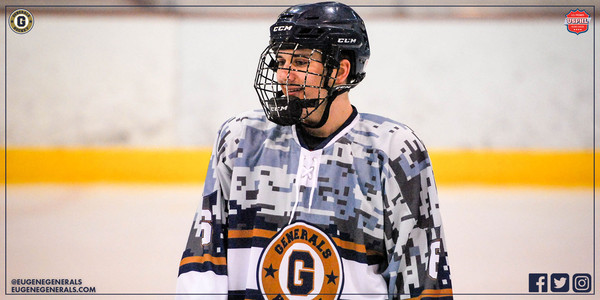 The Eugene Generals (23-6-2, 48 points) defeated the Tri-City Outlaws (10-21-1, 21 points) by a final score of 8-4 on Friday night at The Rink Exchange as the Generals celebrated our nation's armed forces wearing one-of-a-kind camouflage jerseys.

Playing in the first game of the new year, the Generals emerged from the holiday break looking crisp out of the gate, and it didn't take long to score the first goal of 2017 as Eugene native Jack Thornton scored at the 3:55 mark to give the Generals an early 1-0 lead. Tri-City would respond quickly at the 4:48 mark as Kraig Smith tied the game at 1-1, and Tri-City would hold the Generals at bay for the ensuing nine minutes. However, Generals forward Josh Hawn would regain Eugene's one-goal with his seventh goal of the season at the 13:53 mark, and Generals defensemen Brett Sparks would follow less than four minutes later with a power play goal, his 17th goal of the season. Forward Frazier Mohler capped off the first period scoring with just ten seconds left on the clock as he scored a his fourth goal in his last five games and eighth overall to give the Generals a 4-1 lead entering the first intermission. 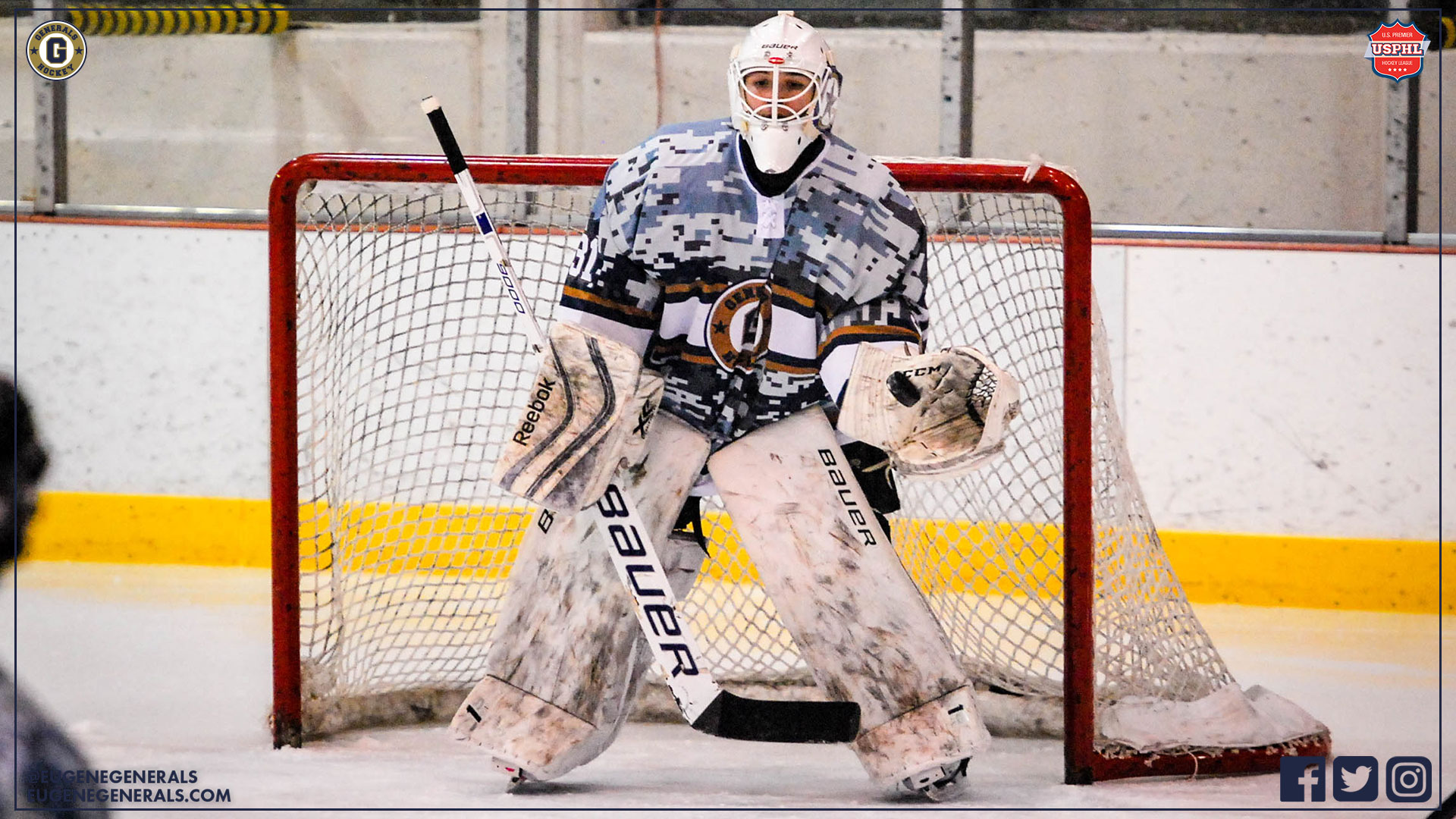 Designed in close collaboration with Harrow, the Generals donned specially designed camouflage jerseys (above) in an effort to pay tribute to the brave men and women of our armed forces.

In the second period, the Generals struck twice in the span of three minutes as Hawn lit the lamp for the second time on the evening at the 12:15 mark followed quickly by Cody Arbelovsky at the 15:11 mark with his team-leading 31st goal of the season. Tri-City answered immediately after Arbelovsky's goal as forward Aiden Johnson cut the Eugene lead to 6-2 just 41 seconds later, but the Generals would strike in the waning moments for the second straight period as forward Kyle Lund scored his seventh goal of the season with just four seconds left on the clock.

In the final period, Arbelovsky pushed Eugene's lead up to five less than two minutes into the period with his second goal of the game, putting him just one goal behind league leaders Braden Sanchez (SEA) and Luka Znidarsic (DCT) who each are sitting on 33 goals. Tri-City would later score a pair of goals three minutes apart as Casey Kosley and Aiden Johnson would each chip into the Outlaws' deficit, but it proved to be only a consolation as the Generals would cruise to an 8-4 win to start the new year.

After the game, Generals Head Coach Justin Kern was proud of how the Generals started the home stretch of the season, stating, "It was a good team win. The boys are happy to be back from the holiday break and I think that showed tonight with their play right out of the gate. We have some things that we need to clean up in the defensive zone, but overall it was a solid team win to begin the new year."

The Generals will now remain in Eugene as they'll conclude the two-game series against the Tri-City Outlaws on Saturday at 7:30pm PST at The Rink Exchange. Tickets can be purchased online at EugeneGenerals.com or in-person immediately before the game at the Eugene Generals box office, located at The Rink Exchange. Video coverage will be available via the Eugene Generals Hockey Network (EGHN) while live stats will be provided at USPHL.com. Remember to follow the Generals on social media throughout the 2016-17 season for in-game updates, highlights, information and behind-the-scenes content.