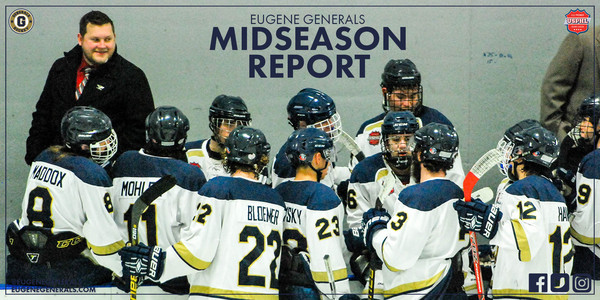 With the home stretch of the 2016-17 USPHL regular season finally here, the Eugene Generals (22-6-2, 46pts) head back to work after a memorable (and historic) start to the season.

Currently sitting atop the USP3HL's Pacific Division with an 11-point lead over the second place Seattle Ravens (16-12-3, 35pts), the Generals will begin the home stretch of the season after having entered the holiday break with a 3-0-1 showing over four games at the USPHL Midwest Showcase. During their time in the midwest, the Generals netted wins over the Alpena Flyers, Motor City Hawks and Ironwood Yoopers before falling to the Tri City Icehawks in a shootout on the final day of the showcase. Despite ending the trip on a sour note, the Generals made history in the heartland having earned the franchise's first ever win(s) at a USPHL Showcase Series event.

Now, they turn their gaze towards the home stretch of the season as a full slate of Pacific Division opponents await before entering postseason play. The Generals will play each divisional opponent four times, except for the West Sound Warriors, who will face off against the Generals a total of six times. Through 22 divisional games thus far, the Generals have posted a 19-2-1 record.

However, before we get ready for the stretch run of the season, let's look back at some of the moments that have stuck out through the team's first 30 games this season. 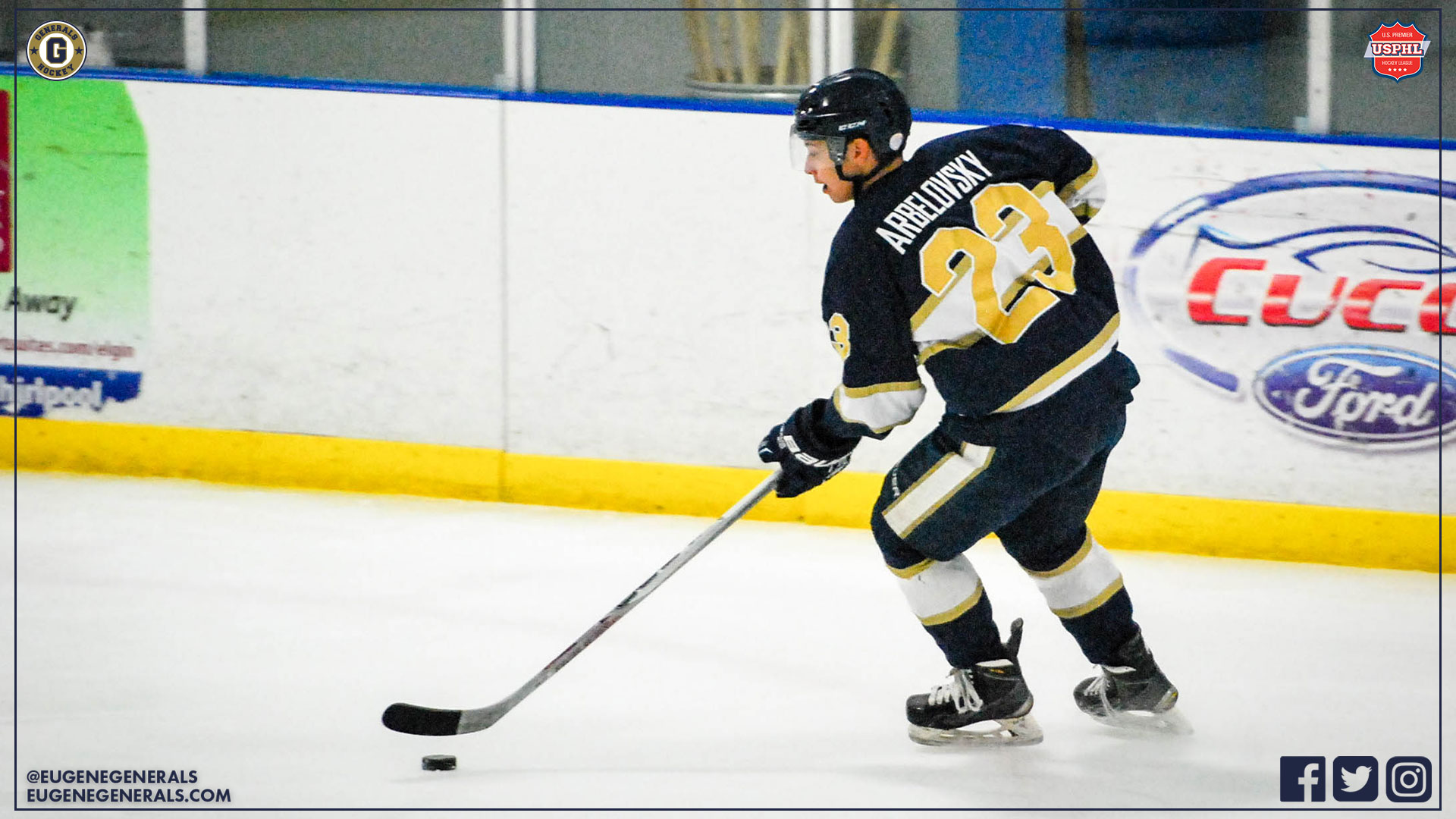 Cody Arbelovsky started his second junior hockey season with a bang as he shattered the franchise record for most goals scored by one player in a single game in just the third game of the season. The Kenai, Alaska native netted an eye-popping six goals in September 23rd's game vs. the West Sound Warriors, besting the previous franchise single game goal scoring record of four held by eight different Generals. Just for good measure, Arbelovsky promptly followed up his six-goal performance with a four-goal performance the following night, also against the Warriors. 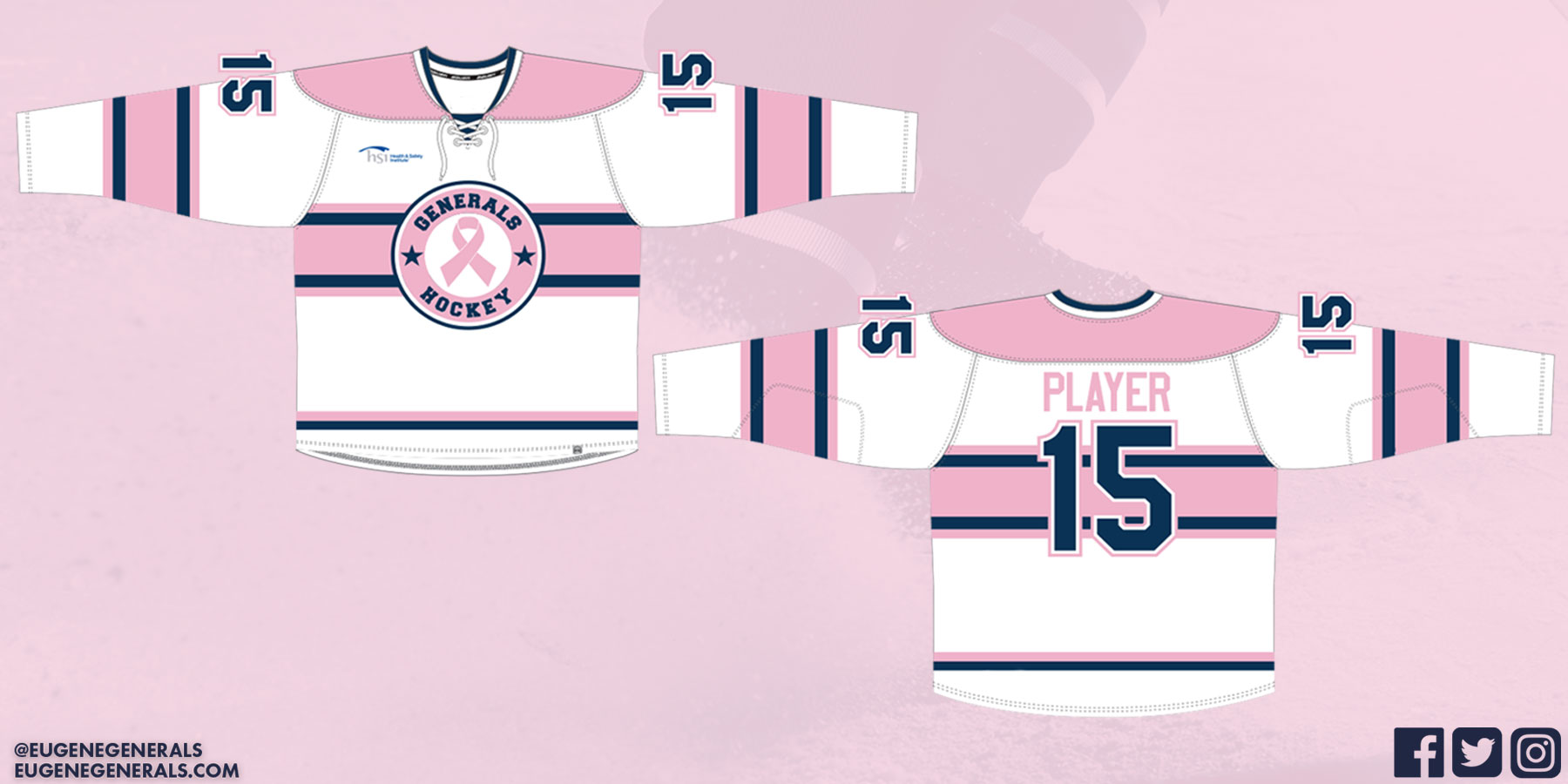 On October 21st, the Generals held the franchise's 12th annual Breast Cancer Awareness Night, presented by the Health & Safety Institute (HSI). Once again donning one-of-a-kind pink jerseys (above) to commemorate the event, the Generals closely collaborated with Harrow to come up with a memorable design, including altering the Generals crest for a special event the very first time in franchise history.

With one of the season's biggest crowd's on hand, the Generals and Seattle Ravens remained tied at 3-3 after regulation and a five-minute overtime period, setting up a three-man shootout. After Seattle forward Andrew Bell scored in the opening round of the shootout to give Seattle the early advantage, Generals goaltender Christopher Alexakis responded with saves on each of the next two Seattle shooters while Generals forwards Baxter Cox and Cody Arbelovsky each scored, with Arbelovsky's tally proving to be the game-winner as his teammates flooded the ice after securing a thrilling 4-3 win.

Following the conclusion of the game, the game-worn pink Generals jerseys were made available for purchase via an online auction, and all of the proceeds were then donated towards the fight against cancer. 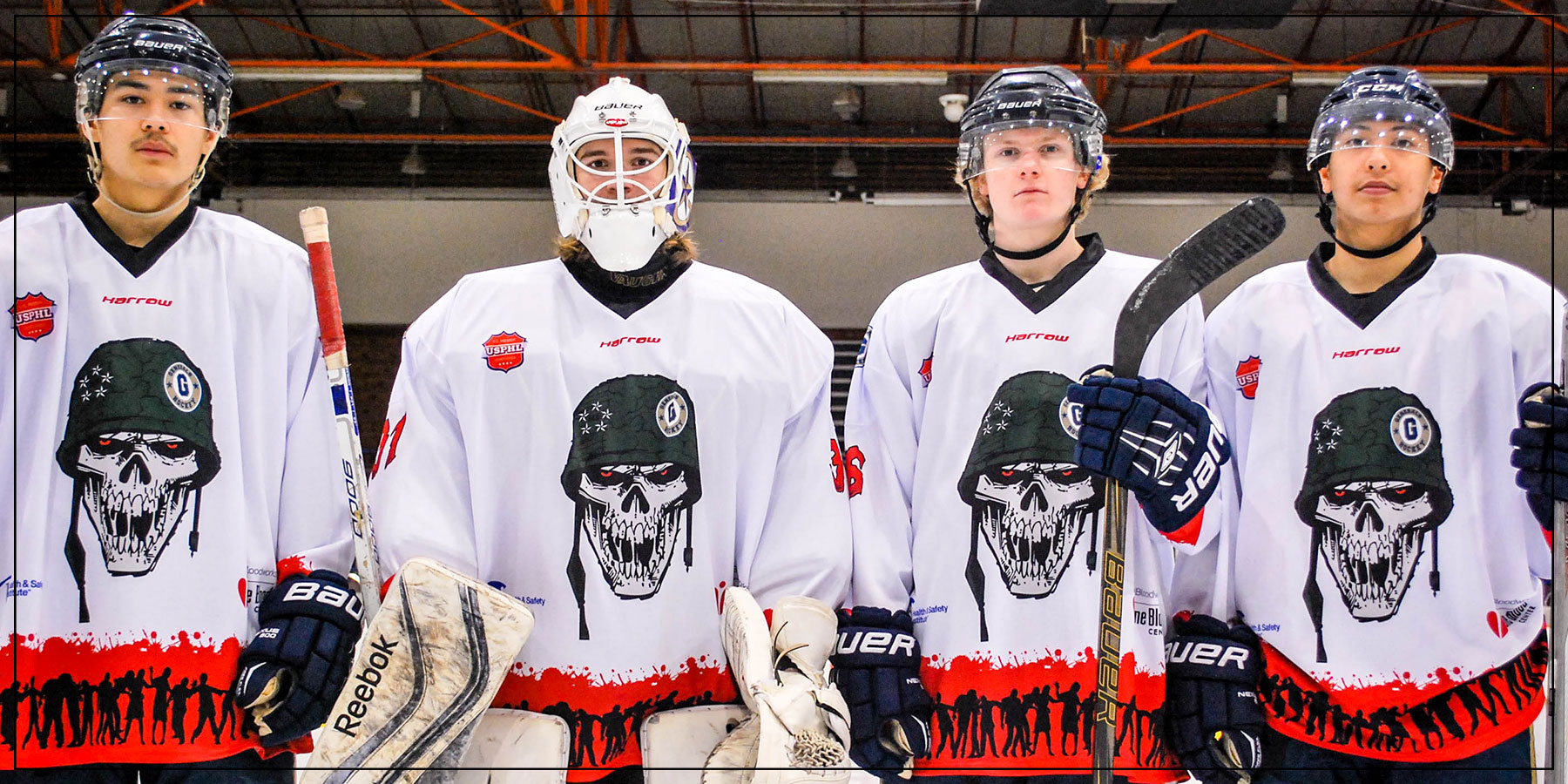 The Eugene Generals Blood Drive, presented by the Lane Blood Center and the Health & Safety Institute (HSI), returned once again after last season's overwhelming success, and once again it proved to be a memorable evening on and off of the ice.

During the day leading up to the game, fans were invited to donate blood from 3:00pm to 7:00pm at The Rink Exchange, and once again our #GensFam did not disappoint as a steady stream of donors filed into The Rink Exchange over the four hour period where they were greeted by the welcoming staff of the Lane Blood Center.

On the ice, the Generals once again hosted the second place Seattle Ravens in what proved to be another thriller that saw a whopping six goals scored in the opening period - three for each side. With each team netting another goal in the second period to enter the intermission tied at 4-4, it set up a tense third period with the Ravens looking to crash the "zombie" themed party.

Still tied at 4-4 with under five minutes to go in regulation, Generals forward Cody Arbelovsky scored his second shorthanded goal of the game before defenseman Brett Sparks added a late insurance goal to seal a 6-4 win in front of another packed house at The Rink Exchange.

In an effort to promote the 2nd Annual Eugene Generals Blood Drive, presented by the Lane Blood Center and the Health & Safety Institute (HSI), Generals coaches and staff convened to come up with their very own unique way to promote the event. With the #MannequinChallenge in the midst of sweeping across social media, the Generals contrived their own interesting take on the internet fad. The result was what you see above, a #MannequinChallenge unlike any done before or since.

History In The Heartland 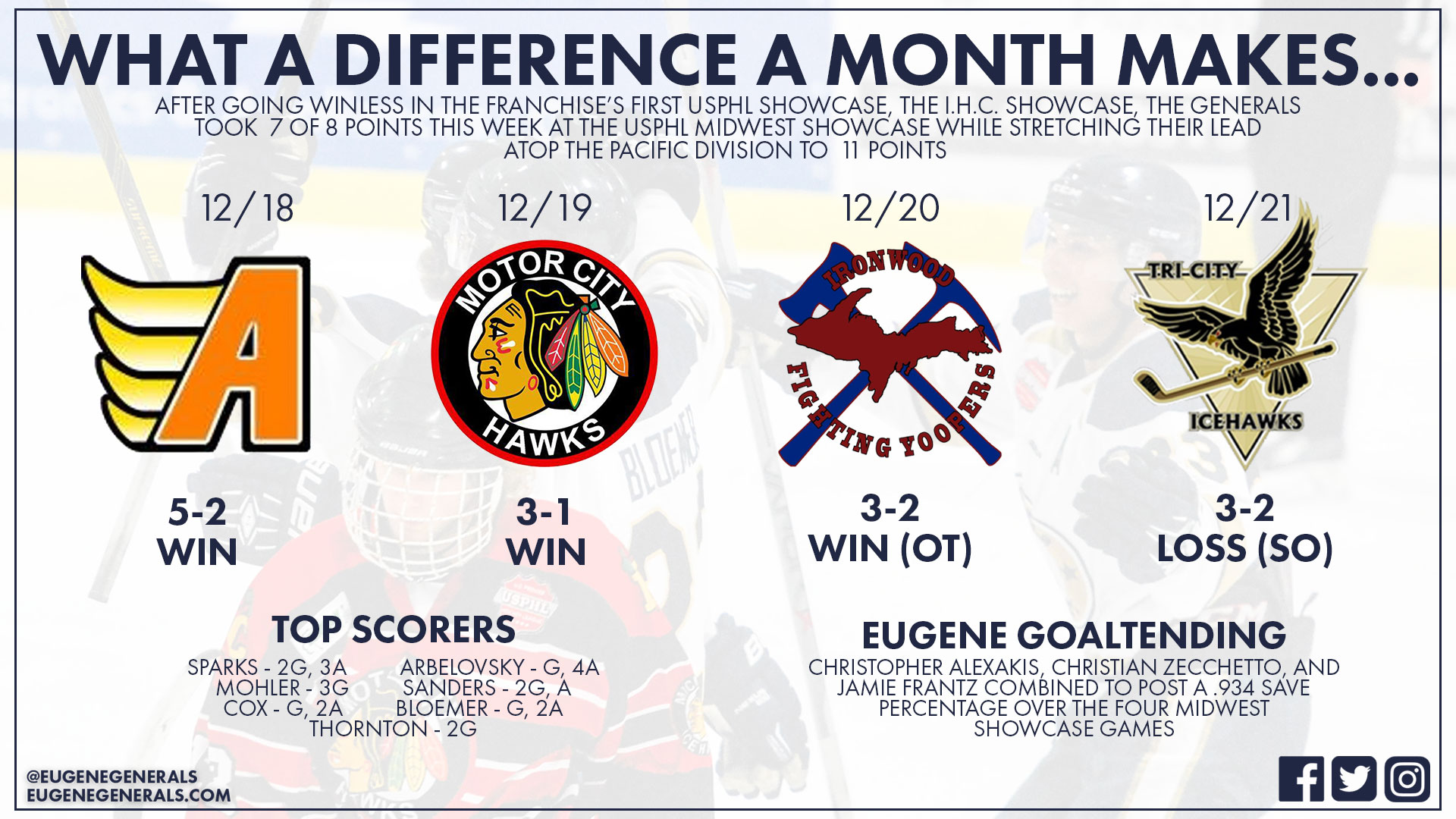 Forward Frazier "Butch" Mohler was one of the biggest stories for the Generals as the young forward scored the opening goal in each of the team's first three games - all wins. However, it was the Eugene trio of goaltenders who stole the show as Christopher Alexakis, Christian Zecchetto and Jamie Frantz each put forth stellar performances as no opponent scored more than two regulation goals against the Generals in any single contest. 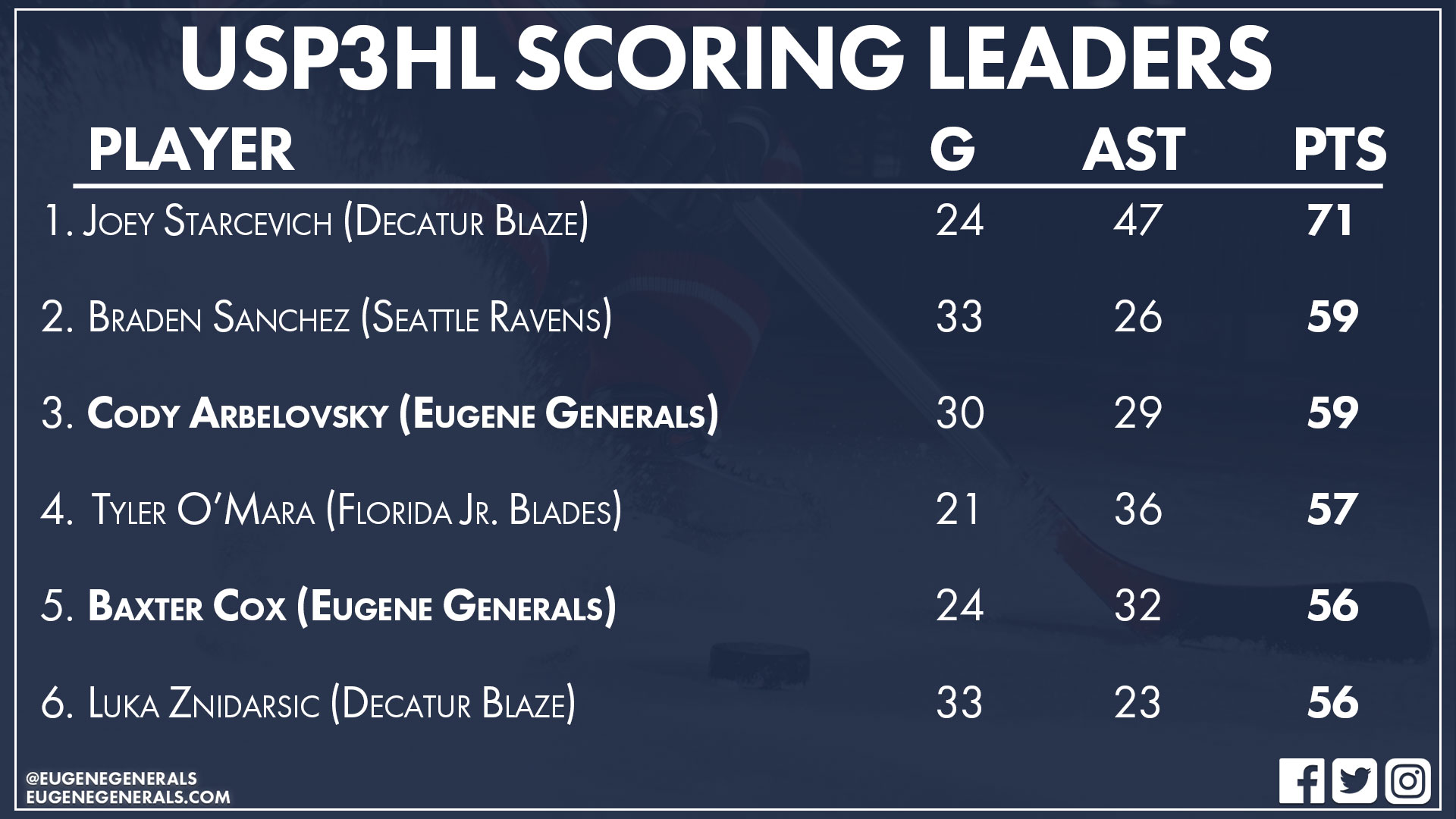 Through 30 games so far this season, a number of Generals players have consistently found themselves at or near the top of the USP3HL in multiple statistical categories. Forwards Cody Arbelovsky and Baxter Cox have continued their back-and-forth race to see who can light the lamp and fill up the stat sheet the most as both players currently find themselves within the top ten in in the USP3HL goals scored, assists, and total points. Arbelovsky will enter the second half of the season ranked third in goals (30), tied for 6th in assists (29) and tied for 2nd in total points (59). Meanwhile, Cox will begin the home stretch of the season tied for 6th in goals (24), tied for 4th in assists (32), and tied for 5th in total points (56).

On the blue line, defenseman Brett Sparks currently leads all USP3HL defensemen in goals scored (16) while his 33 total points are second only behind Alpena's Nicholas Baranyai (39). Sparks hasn't been the only Generals defensemen to develop a knack for lighting the lamp, though, as team captain Logan Sanders currently ranks tied for fifth overall in the USP3HL in power play goals (6) among all skaters.

Between the pipes, the Generals have boasted one of the nation's best three-man rotation of netminders, led by Christopher Alexakis. In his first season with the Generals, Alexakis is currently third in the USP3HL in wins (14), 7th in save percentage* (.934), and 9th in goals against average* (2.04). Together with Christian Zecchetto and Jamie Frantz, the trio of puck stoppers most recently combined to post a .934 save percentage at the 2016 Midwest Showcase while allowing a total of just seven regulation goals over four games.

With just 14 games remaining in the regular season, here's how the schedule shakes out for the Generals the rest of the way:

In total, the Generals will play 8 of the team's final 14 regular season games on home ice at The Rink Exchange, including the final 6 games of the season. 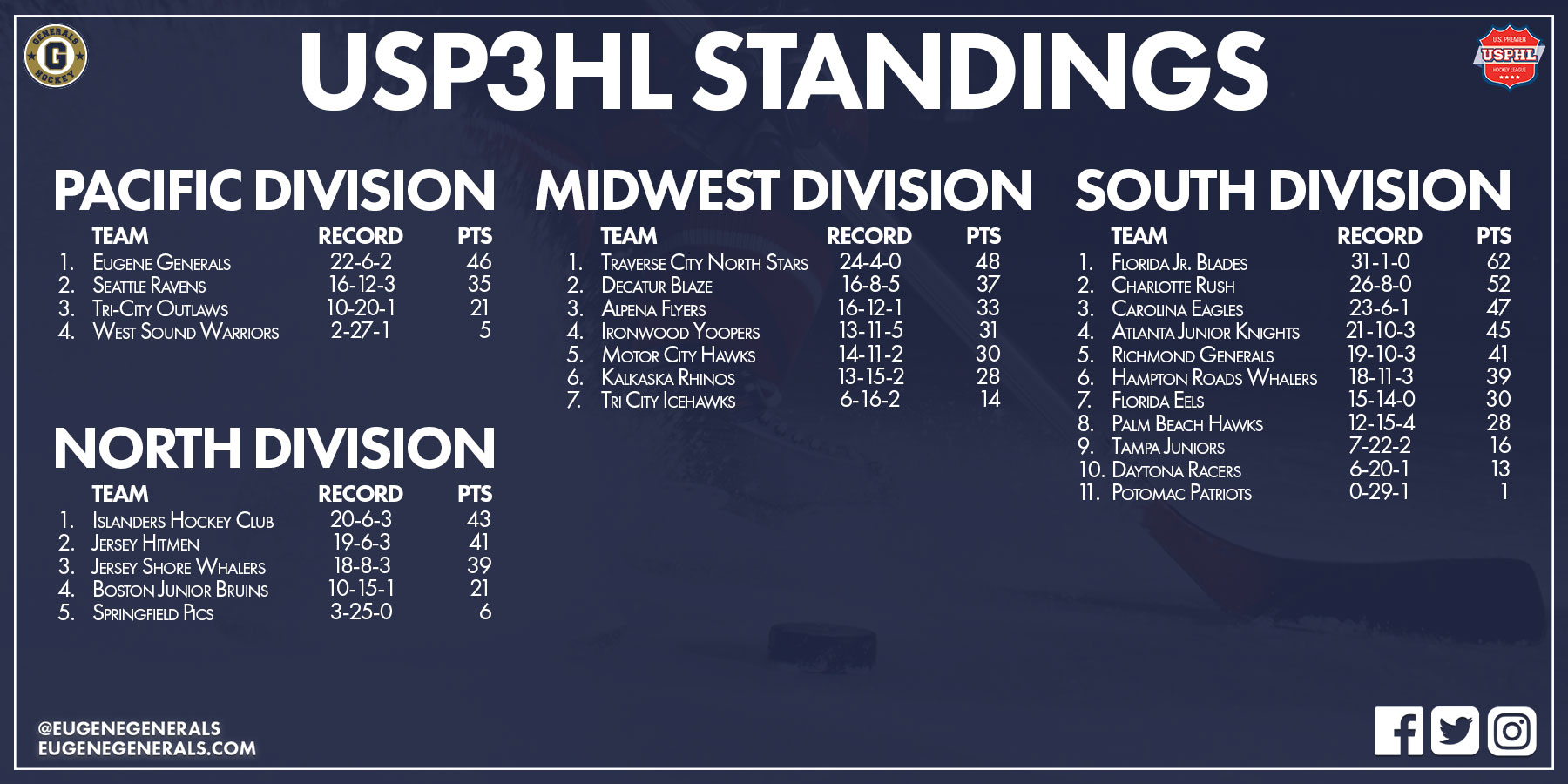 The Generals will enter the final 14 regular season games with a healthy cushion over the second place Seattle Ravens, a once narrow margin that quickly swelled to an 11-point lead in the weeks leading into the holiday break. In addition, Eugene also holds one of the USP3HL's best overall point totals as only the Florida Jr. Blades (62), Charlotte Rush (52), Traverse City North Stars (48) and Carolina Eagles (47) have ammassed more points than the Generals entering the new year. 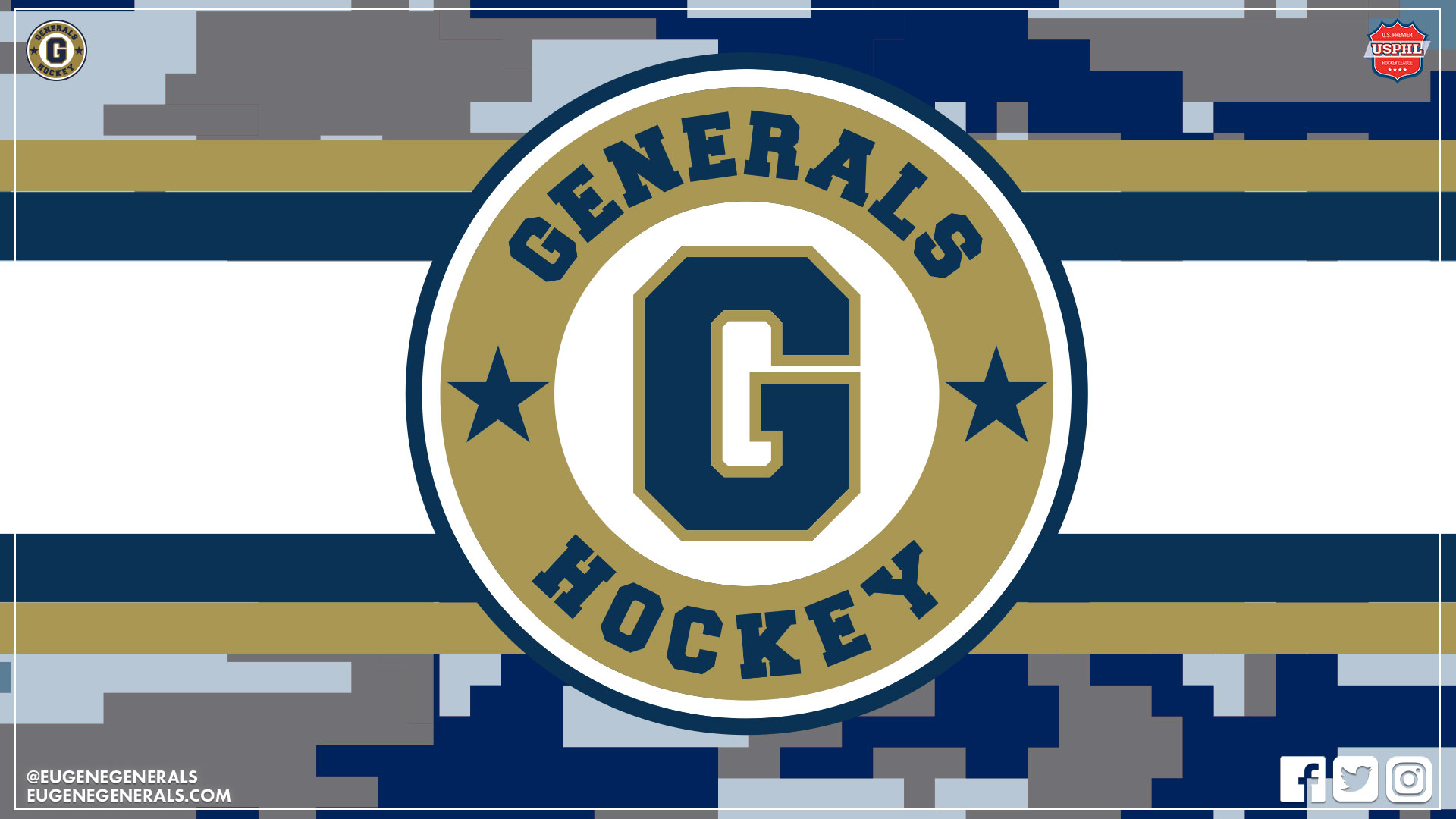 The Generals will begin the home stretch with another special event as Friday, January 6th's game vs. the Tri-City Outlaws marks Military Appreciation Night when the franchise will honor the men and women who have and continue to courageously serve in our nation's armed forces. To commemorate the event, the Generals will once again be donning one-of-a-kind jerseys specifically designed for the evening, a sneak peak of which you can see above.

All active duty military, veterans, reservists, and dependents are eligible to receive free admission to Friday's game upon presenting a valid military I.D.