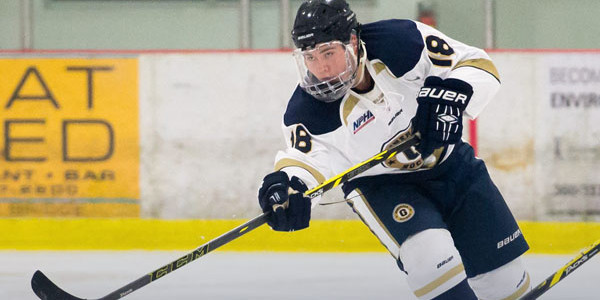 Bellingham, WA – The Eugene Generals were eliminated from the Northern Pacific Hockey League Playoffs after losing 4-2 to the Bellingham Blazers in Game Five of a first round series.

After being down 2-0 in the first round, best-of-five series, the Generals almost completed the comeback in tonight’s decisive Game Five. The Generals stormed back with two straight wins in Eugene on Friday and Saturday to tie the series at two before falling to the Blazers Sunday night. The Blazers now advance to the Cascade Cup Championship to face the Wenatchee Wolves.

Both teams had a quick turnaround after last night’s epic Game Four in Eugene. After winning 3-2 in double overtime, the Generals travelled to Bellingham early this morning for Sunday night’s Game Five at the Bellingham Sportsplex.

The Blazers struck first tonight, scoring at 11:57 of the first period to take a 1-0 lead. Sean Meetsma recorded the first goal of the game, with assists given to Karson DeRego and Kevin Duncan.

After a Blazers’ tripping penalty, the Generals capitalized on the 5-on-4 advantage to tie the game at one apiece. Isaac Vincent scored the power play goal in front of the net, with Buddy Dale providing the perfect pass at 14:06.

Six seconds into the power play, Bellingham regained the lead when DeRego scored on a rebound to put the Blazers up 2-1. Mark Klasen and Sam Vizenor each tallied assists on the power play goal, coming at 15:09 of the first period.

After a scoreless second period, the Blazers went up by two during the third period when Simeon Smith scored with a bunch of bodies in front of the net. Justin Sullivan and Alex Leski assisted on the goal at 4:07 of the final period.

Two minutes later, Dustin Gomez scored at 6:08 to trim the Generals’ deficit to just one goal. Kenny Griffin assisted on Gomez’s third goal of the series.

Pulling the goalie with over a minute left in the game, the Generals furiously tried to tie the game to force yet another overtime for the second straight night. However, Sam Vizenor of Bellingham scored the empty-netter at 18:52 on assists from DeRego and Meetsma.

Unfortunately, the Generals could not overcome the late empty-net goal, thus falling short of winning their third straight game in as many nights. Still, the Generals had an amazing season after missing out on the postseason all together last year.

The only player who is aging out on the roster, Generals goalie Chris Pritchard ended his junior hockey career with yet another spectacular game. After helping save the Generals’ season in last night’s epic double overtime win in Game Four, the third-year veteran almost did exactly the same Sunday night, saving 39 of 42 shots in his last game with the team.

The remarkable turnaround during the Generals’ eleventh season would not be possible without the support of the fans, volunteers, host families, sponsors, players, and coaches. On behalf of the Eugene Generals, the team would like to thank everyone for their continued support of the best hockey in the Willamette Valley.