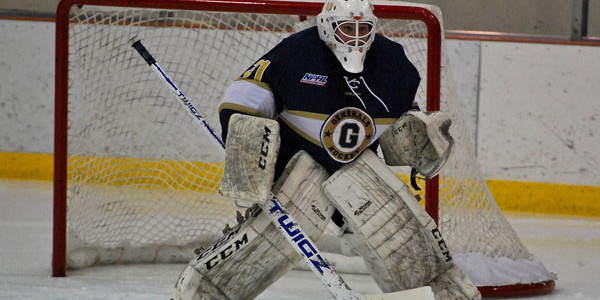 Eugene, OR – The Eugene Generals won an exhilarating 3-2 game over the Bellingham Blazers in double overtime, keeping their playoff hopes alive.

In an instant classic and one of the most exciting games in franchise history, the Generals pulled off the double overtime win to force a winner-take-all Game Five tomorrow night in Bellingham. The first round, best-of-five series in the Northern Pacific Hockey League (NPHL) Playoffs is now tied at 2-2 after tonight’s epic Game Four.

Cody Arbelovsky provided the heroics in the second overtime, scoring with 5:23 left on passes from Buddy Dale and Josh Hawn to win the game and force a Game Five on the road. The Generals leave Eugene for Bellingham early tomorrow morning.

Generals goalie Chris Pritchard also played the role of hero, stopping an incredible amount of shots during the first and second overtimes to keep Eugene’s season alive. Pritchard saved 53 of 55 shots, including 28 in the two twenty-minute overtime periods while facing the immense pressure of sudden death overtime.

Each team scored once in the first period, with the Generals striking first. Cole Bloemer recorded the power play goal 7:23 into the game, with assists from Brett Sparks and Hawn. With 47 seconds left in the period, Sam Vizenor tied the game at one with his first goal of the series.

Similar to the first twenty minutes, both the Generals and Blazers scored once during the second period, with Eugene regaining the lead on an unassisted goal from Isaac Vincent at 7:36. Alex Leski of Bellingham tied the game at the 15:46 mark of the period to tie the contest at two apiece going into the final intermission.

For the next fifty-five minutes or so—third period, first overtime, and second overtime—both teams would go back and forth with one another, exchanging quality shots and hits in an intense postseason battle. In the end, the Generals would break the 2-2 deadlock with Arbelovsky’s game-winner in the second overtime to force a decisive Game Five.

Game Five of the first round series between the Generals and Blazers will be played tomorrow night at 6:35 PM in Bellingham, where the winner will advance to the Cascade Cup Championship and face the Wenatchee Wolves.

Fans can follow tomorrow’s Game Five action through Fast Hockey or Pointstreak. The Generals will also provide live updates throughout the game on Facebook and Twitter as well. Visit www.eugenegenerals.com for more information.