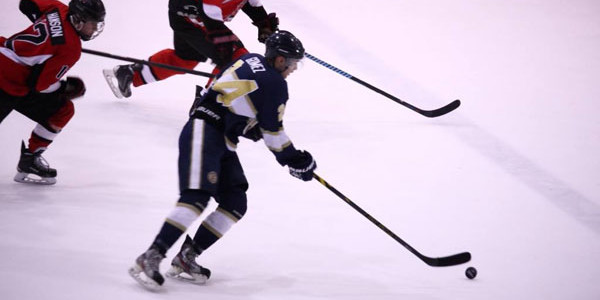 Eugene, OR – The Eugene Generals defeated the Bellingham Blazers 4-3 in Game Three of a first round series in the Northern Pacific Hockey League (NPHL) Playoffs.

Down 2-0 in the best-of-five series going into tonight’s game, the Generals were able to stave off elimination by winning their first game of the series. After tonight, the Blazers lead the Generals 2-1 with Game Four to be played tomorrow night in Eugene.

Tonight’s win was the first playoff victory for the Generals in over four years. The last time the Generals won a postseason game was back on February 25, 2012, when they defeated the Vancouver Victory 3-2.

With their backs against the wall, the Generals won Friday’s back and forth contest in thrilling fashion. Eugene outshot Bellingham by a margin of 33-29.

The Blazers would take the first lead of the game, scoring the only goal of the first period. Brett Hanson lit the lamp at 14:21, with assists from Justin Sullivan and Reese Fegen.

Within the first five minutes of the second period, the Generals took their first lead of the series when they scored twice to go up 2-1. Cody Arbelovsky scored an unassisted goal at 1:37, with Brett Sparks following with a beautiful power play goal at 4:26. Nash Berkowitz assisted on the go-ahead power play goal.

Not long after, the Blazers tied the game at two when Brett Hanson recorded the team’s first power play goal of the night. His power play score came at 8:37, with Kevin Duncan providing the assist.

At 12:53 of the eventful second period, Josh Hawn helped the Generals regain the lead when he scored on a power play to put Eugene up 3-2. Cole Bloemer assisted on the successful power play goal, prompting the Blazers to switch goalies midway through the game.

In the third period, the Blazers would tie the game once more when Karson DeRego tallied the power play goal to make it 3-3. Austin Sabin had the assist on what would be Bellingham’s last goal of the night.

With the extra attacker on the ice for the Generals, Dustin Gomez fired a shot into the back of the net to put Eugene up 4-3. Buddy Dale set Gomez up with a beautiful pass on the goal, which came at 14:58 of the third period.

The Blazers tried to tie the game and force overtime in the last five minutes, but the Generals’ defense held up to beat Bellingham for the third time this year (regular season plus playoffs).

Similar to the other two wins versus Bellingham, Generals goalie Chris Pritchard had another great game in net to keep Eugene alive for another game. In his third career postseason start, Pritchard stopped 26 of 29 shots to earn his first playoff victory between the pipes.

Game Four will be played tomorrow night at 7:35 at the Rink Exchange in Eugene. If the Generals win tomorrow night, both teams will play a winner-take-all Game Five in Bellingham on Sunday night. The winner of this series moves on the Cascade Cup Championship against the Wenatchee Wolves.