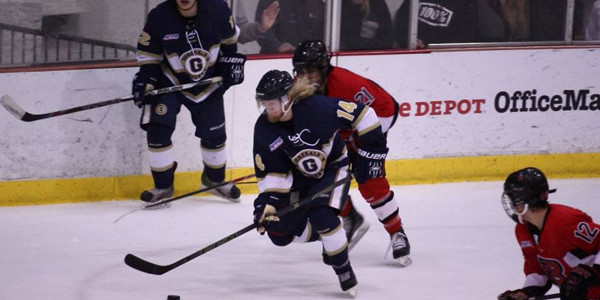 Eugene, OR – The Eugene Generals face an uphill battle this weekend, needing to win three straight games against the Bellingham Blazers in order to stay alive in the Northern Pacific Hockey League (NPHL) Playoffs.

Down 2-0 in a best-of-five, first round series, the Generals cannot afford any more slipups if they want to keep their season alive. Eugene lost the first two games of the series last weekend up north in Bellingham.

Here is the schedule for the first round series between the Generals and Blazers, with last weekend’s results:

After a power outage at the Blazers’ facility pushed the start of the series back a day, both teams were back on the ice for Game One on Saturday at the Bellingham Sportsplex. The one-day break would not have an effect on the Blazers, who took an early two-goal lead and never trailed to give the Generals a 6-2 loss. Costly penalties would be too much for the Generals too overcome, who allowed three goals on the penalty kill, all in the second period.

In Game Two on Sunday, penalties would once again haunt the Generals, as they gave up three power play goals to the Blazers yet again. Tied 1-1 at one point, the Blazers would score three unanswered to hand the Generals a 4-1 loss, putting them in a 0-2 hole in the best-of-five series.

If the Generals win the two home games on Friday and Saturday, they will travel to Bellingham for a winner-take-all Game Five in Bellingham on Sunday.

As mentioned in the first two games, penalties have proved to be very costly for the Generals so far this series. The Blazers have capitalized on those penalties, scoring six times on the power play against the Generals (3-7 in each game).

Scoring just three goals in the first two games, the Generals have struggled to get anything going offensively. Of their three goals in the series, two have come on the power play (both during Saturday’s 6-2 loss). Buddy Dale has contributed on all three goals, accumulating one goal on Sunday and two assists last Saturday.

Over the two-game set in Bellingham, Generals goalie Chris Pritchard made his postseason debut in net. Facing exactly 100 shots from the Blazers, Pritchard has recorded 90 saves thus far in the series for a save percentage of .900%. In Game 2 alone, he faced 53 shots from the Blazers, saving 49 to keep the Generals competitive in Sunday’s contest.

The winner of the Generals-Blazers series will move on to the Cascade Cup Championship to face the Wenatchee Wolves, who swept the Tri-Cities Outlaws in the other first round series. The Wolves won 9-1 Tuesday night to secure their spot in the championship series.

Playoff tickets for Game Three and a potential Game Four are available online. For those who cannot make it, EGHN will broadcast the playoff action live and free online.