Generals Down 2-0 After Losing to Blazers Again 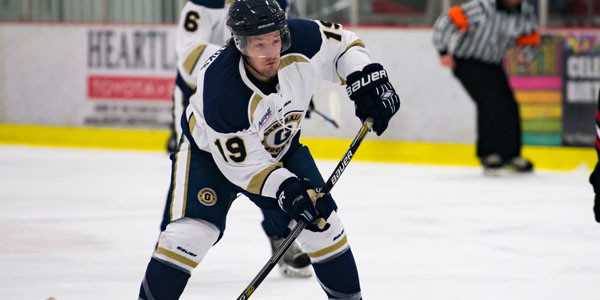 Bellingham, WA - The Eugene Generals lost 4-1 to the Bellingham Blazers in Game Two of a first round series in the Northern Pacific Hockey League (NPHL) Playoffs.

Down 2-0 in the first round, best-of-five series, the Generals are now in must-win mode after dropping the first two games in Bellingham. The Generals return to Eugene for Game Three on Friday night at the Rink Exchange, where they have to win if they want to stay alive.

Similar to the previous night, penalties proved to be very costly for the Generals. Of the four goals allowed by Eugene, three occurred on the penalty kill, just like in the first game of the series.

Bellingham would score the first goal of the night, coming 10:45 into the first period. Justin Sullivan scored his third power play goal of the series, with assists from Simeon Smith and Kevin Duncan to put the Blazers up 1-0.

Five minutes later at 15:51 of the first period, the Generals tied the game at one when Buddy Dale scored what would be the team's only goal of the game. His game-tying goal was unassisted.

With just 22 seconds left in the first, Sean Meetsma helped Bellingham regain the lead when he lit the lamp to put his team up 2-1. Mark Klasen and Karson DeRego each had assists on the go-ahead goal.

In the second period, the Blazers capitalized on their second power play to increase their lead to 3-1. Von Mullin recorded his first goal of the series, with Sullivan and Smith each providing the assists on the successful power play at the 8:50 mark.

Sullivan recorded the team's final goal, coming on yet another power play at 15:27 of the third period. DeRego and Klasen each tallied their second assists of the game.

Similar to the previous game, the Blazers bombarded Generals goalie Chris Pritchard with 53 shots against. After making 41 saves in Game One, Pritchard stopped 49 shots to keep the Generals in the game.

Game Three of the first round series between the Generals and Blazers will be this Friday, March 18th at 7:35 PM in Eugene. If the Generals win the next game, both teams will square off in Game 4 on Saturday, March 19th, at the same time and place. Tickets for both playoff games are available online at eugenegenerals.com.