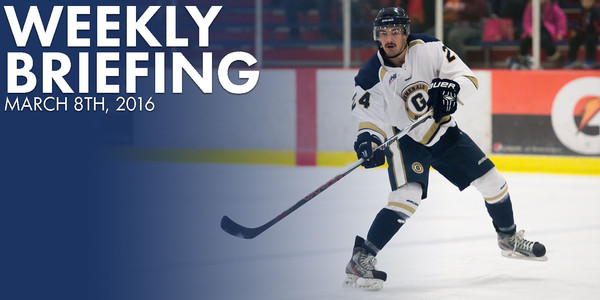 The regular season is in the rear view mirror as the Generals now prepare for a matchup with the Bellingham Blazers in the first round of the 2016 Cascade Cup Playoffs.

But before we take a look ahead to the looming postseason matchup, let's take a quick look back at the Generals' final series of the regular season, a two-game set on the road vs. the first place Wenatchee Wolves.

After falling to the Wolves in a two-game series back in Eugene the previous weekend, the Generals looked to bounce back and build some momentum against a Wenatchee team that they hope to face again in the Cascade Cup Finals.

Yet again, the Generals defied the odds against the one-loss Wolves and scored first, the fifth times they've done so in eight meetings vs. the Wolves this season. Good fortune lead to the Generals opener as Kory Palmer pounced on a Wolves turnover in their own zone and finished beautifully with an elevated backhand that beat Max Flynn in net to give Eugene the early 1-0 lead on the road.

Palmer's goal would be the difference until the 11:58 mark of the first when Wolves' leading scorer Hayden Givens struck back and tied the game at 1-1, a scoreline that would hold through the first intermission.

In the second period, the Wolves' high-powered offense clicked into gear as they scored three times in the period - two of which came from Hayden Givens, completing his hat trick - while the Generals were unable to light the lamp in the game's second twenty minutes.

In the final period, the Wolves kept rolling right out of the gates as they extended their lead to 5-1 with just 32 seconds off of the clock. Dustin Gomez struck back fourteen minutes later to cut the Wenatchee advantage to 5-2, but the young Wovlerines would tack on two more late goals and wrap up their 38th win of the season by a final score of 7-2.

In net, Christopher Pritchard got the start and stopped 41 of 48 shots faced while Wolves Max Flynn allowed mutiple goals for just the tenth time in twenty starts this season (five of which have been vs. Eugene).

Following Saturday night's defeat, the Generals wrapped up the regular season on Sunday with their fourth consecutive matchup with the Wolves.

Going against the typical trend this season, it was the Wolves that scored first on Sunday as hunter Hegdahl lit the lamp not once, but twice within the opening twenty minutes to give the Wolverines an early 2-0 advantage.

However, Generals captain Christian "Buddy" Dale would cut that advantage in half at the 13:58 mark of the first period as capitalized on a miscue by the Wolves' power play unit to score the first short-handed goal of his career.

The Wolves quickly regained their two-goal cushion just two minutes later as Denton Hymer put the home side back up by a pair, a score that would stand heading into the first intermission.

After a scoreless yet penalty-filled second period, the Wolves would add more more goal in the third period for some added insurance as former Wenatchee Wild forward Hunter Alden scored just 22 seconds into the period to put Wenatchee up 4-1, a score they would ultimately win by.

In net for the Generals, Zealand Walterscheid put together a soild effort stopping 45 of 49 shots faced. The New Mexico native finishes his first full junior hockey regular season with an 8-5-0-1 record with three shutouts, a 2.49 goals against average, and a .920 save percentage.

No surprises were expected to be in store as both first round playoff matchups were already set in stone heading into the regular season's final weekend. However, there was still plenty of action to catch up on as every NPHL team played at least one game this past weekend.

Starting final weekend of action, the Seattle Ravens and Tri-City Outlaws faced off in Kennewick, Washington for the evening's lone NPHL game. Seattle, who once firmly held the fourth and final playoff spot, entered this past weekend seeking their first win since all the way back in November. Adding to the odds against them, the Ravens were facing perhaps the hottest team in the NPHL, an Outlaws squad that had won six straight, including a two-game sweep of the Ravens during that span.

In the first period, it appeared the Ravens' woes would continue as the Outlaws jumped out to an early 2-0 lead with less than half of the opening period gone. However, the Ravens would strike back and cut the Outlaws lead to 2-1 before the first intermission thanks to a Grant Omyer goal.

In the second period, the usually low-scoring Ravens exploded out of the locker room and outscored the Outlaws 3-0 behind two goals from Johnny Scherer, and their offensive mojo kept rolling in the third period as both Logan Koski and Tom Speer would score en route to a 6-3 Ravens win, snapping a nearly three-month long losing skid.

On Saturday, the two sides returned to Seattle's home rink to wrap up the home-and-home series, and once again the Outlaws jumped out to an early 2-0 lead thanks to goals by Ty Niskanen and Colton Symbol in the game's first four minutes. This time, though, the Ravens would have little response as Aaron Questad would later score a pair of goals for the Outlaws who would ultimately cruise to a 6-2 win in both team's regular season finale.

Also on Saturday, the Bellingham Blazers and West Sound Warriors wrapped up their regular seasons with a one-game matchup in Bremerton, Washington. Looking to continue building momentum heading into their first round palyoff date with the Generals, the Blazers scored twice in a 22 second span midway through the opening period to take a 2-0 lead into the first intermission.

In the second period, Mark Collins' squad kept rolling as they outscored the Warriors 3-1 in the game's second twenty minutes to carry a 5-1 lead into the final period. There, the Blazers would add two more goals for good measure as they would ultimately find no problems during their regular season finale, a 7-2 win.

Now that the postseason has officially arrived, here's a look at the upcoming first round matchups.

In a matchup that had long been expected, it is now official that the Generals and Blazers will meet in the first round of the upcoming Cascade Cup Playoffs. On the other side of the bracket, the only question that had remained was figuring out who Wenatchee would host in their first round matchup. After a strong second half of the season, the Outlaws have cruised into the fourth and final playoff spot and thus have secured a first round date with the Wolves.

A yearly tradition, postseason player awards were dished out this past weekend as coaches, staff, host families, friends, and fans came together for the annual year-end banquet at The Rink Exchange. Here are the winners for the 2015-16 Eugene Generals Team Awards:

Rookie of the Year: Cody Arbelovsky

Mornings With The Generals

This past weekend, Amber Arbelovsky (sister of Generals forward Cody Arbelovsky) and the Alaska All Stars won the U-19AA Pacific District Championship in Anchorage, Alaska after going a perfect 5-0-0 at this year's competition. 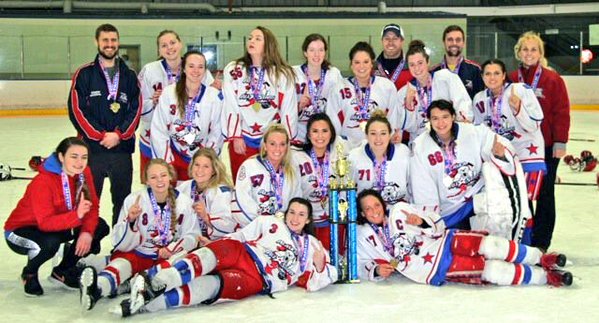 Arbelovsky (#15 above) and the All-Stars put together perhaps the most dominant performance of any team at any level during this year's District Championships, outscoring opponents by an eye-popping 28-0 margin over their five tournament games. Now, the All Stars move on the the USA Hockey National Tournament in Burlington, Vermont which begins at the end of this month.

To read more about the Cody and Amber's sibling relationship, check out our newest feature story: Sibling Support System.

In case you missed it, the Generals wrapped up the regular season home schedule one week ago, and for the eleventh consecutive season, the final home game of the regular season marked Fan Appreciation Night, a special evening in which the Generals organization thanks the best hockey fans in the Northwest for their continued support of Junior Hockey in Eugene, including a full slate of events, games, giveaways, autographs, and a postgame skate with Generals players. 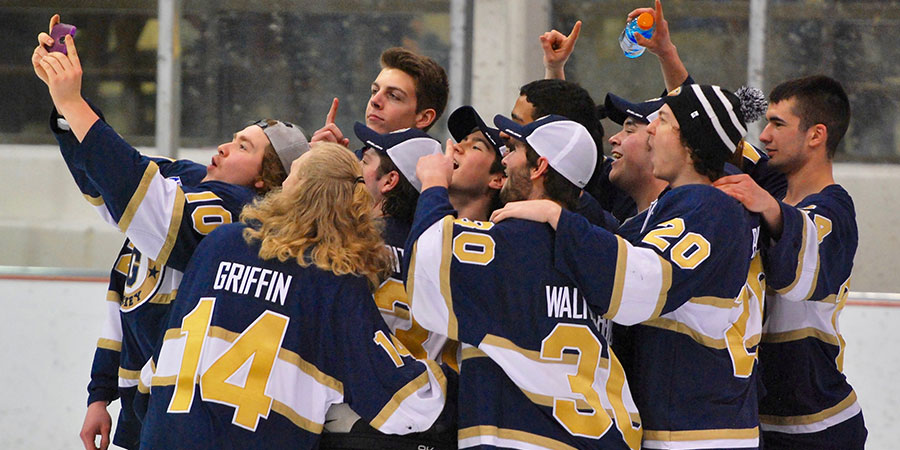 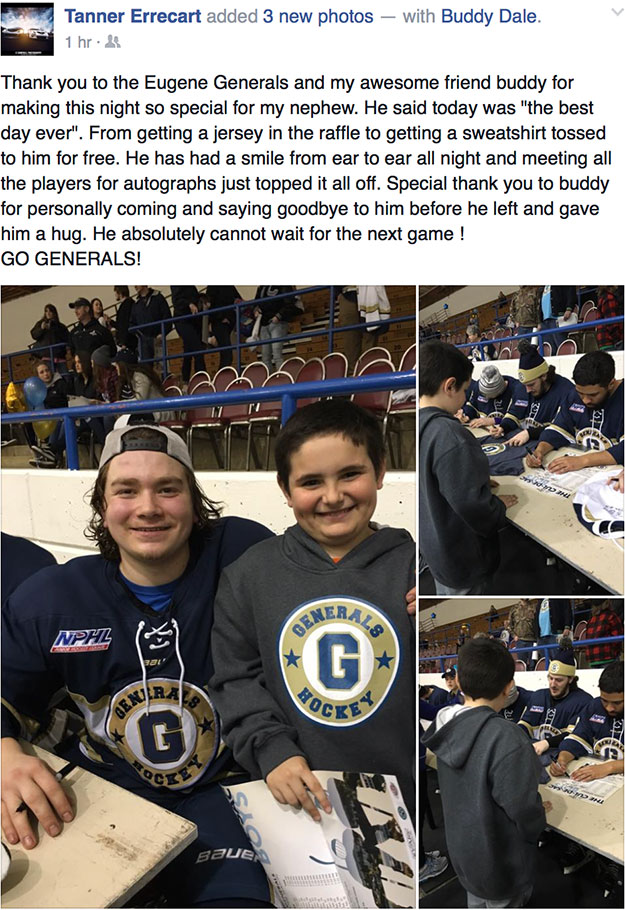 As always, it was a special evening for everyone involved as new and familiar faces packed The Rink Exchange for one of the season's biggest (and rowdiest) crowds, and both fans and players left with memories that will last a lifetime. 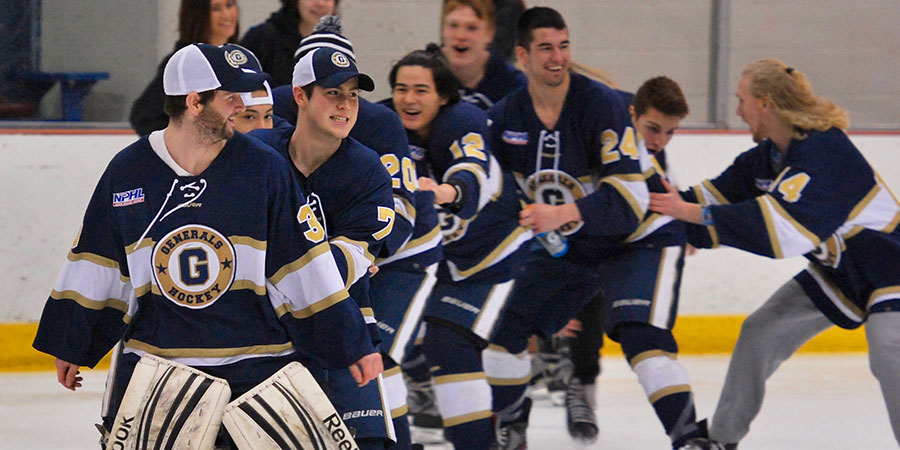