NPHL Playoff Preview: Generals Back in the Postseason 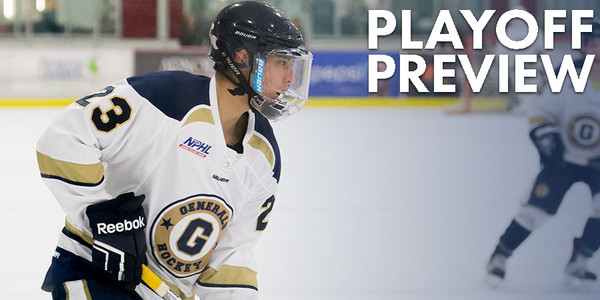 Starting this weekend, the Eugene Generals begin their quest for the Cascade Cup in the first round of the Northern Pacific Hockey League (NPHL) Playoffs against the Bellingham Blazers.

For the tenth time in their eleven-year history, the Generals are in the NPHL postseason with a chance to hoist the Cascade Cup. Eugene returns after a two-year hiatus from postseason play, when they missed the playoffs a season ago.

A best-of-five series with the winner moving on to the Cascade Cup Championship, this first round matchup will not be the first time these teams have met in the playoffs. Three years ago, the Generals had home-ice advantage over the Blazers, who were an expansion franchise at the time. Not only did Bellingham shock the Generals with a three-game sweep, they went on to win the Cascade Cup in just their first season.

Here is the schedule for the first round of the NPHL Playoffs between the Generals and Blazers:

Games one and two between the Generals and Blazers will take place Friday and Saturday night at the Bellingham Sportsplex.

After the first two games in Bellingham, the Generals return to Eugene for game three on Friday, March 18th at 7:35 PM at the Rink Exchange. If necessary, both teams will also play each other in game four in Eugene on Saturday, March 19th at the same time. Playoff tickets for the games in Eugene are available online at eugenegenerals.com.

If the series is tied 2-2 after four games, the Generals travel to Bellingham for a decisive game five on Sunday, March 20th. The Generals have not played in a winner-take-all playoff game since February 2012, when they lost a deciding game three to the Vancouver Victory. Bellingham, meanwhile, went all five games in the first round last year versus the Wenatchee Wolves, where the Blazers won the fifth and final contest 2-0.

Playing in the last three Cascade Cup Championships, the Blazers look to not only get back, but to win it for a third time in franchise history. Last year, the Blazers were swept in three straight games by the West Sound Warriors after beating that same team to win their first two championships.

Despite appearing in the postseason for an unprecedented tenth time, Eugene is still looking for their first championship. The Generals have not won a postseason game in over four years, with their last one dating back to February 25, 2012 over Vancouver. The last time the Generals won a playoff series was six years ago, when they defeated the Tri-City Titans in a best-of-five series three games to one in 2010.

In the eight head-to-head matchups during the regular season, the Generals won twice compared to the Blazers’ six wins. Both of the Generals' wins over the Blazers this season actually happened in Bellingham.

The first time these two met was during Halloween weekend. Playing in Bellingham, the Generals only scored three times in the two-game series en route to losses of 5-2 and 4-1. Both games were close throughout, though the Blazers would pull away late to secure both wins.

A few weeks later, the Generals and Blazers met for the first time in Eugene. Similar to their first series, the Generals mustered three goals in defeats of 3-1 and 6-2. Bellingham’s Simeon Smith had four points during the weekend (one goal and one assists in each), while other players such as Sam Vizenor, Justin Sullivan, and Kevin Duncan recorded three apiece.

Fast forward two months to January, where the Generals finally broke their skid against Bellingham. Playing on the Blazers’ home ice, the Generals, who entered the series with a six-game winning streak, shutout Bellingham not just once, but twice in 3-0 and 1-0 wins. Generals goalie Chris Pritchard was unrelenting in net, stopping a combined 84 shots in the two-game sweep of Bellingham. That weekend marked the first time in five years the Generals shutout an opponent in back-to-back nights, when former Eugene goalie Matt Bartels did so consecutively against Puget Sound and River City.

The last time the teams met was in February, when they squared off for a two-game set at the Rink Exchange. After Bellingham won 4-1 on Friday, the Generals and Blazers then went back and forth in a Saturday night battle which was decided in overtime. An unfortunate bounce went in favor of the Blazers with one second left in overtime, handing the Generals a tough 4-3 loss.

The winner of this series moves onto the Cascade Cup Championship series, which begins later this month. Either the Generals or Blazers will face the winner of the other first round series, between the Wenatchee Wolves and Tri-Cities Outlaws.

In terms of special teams, the Generals and Blazers have posted fairly similar numbers. While each have 31 successful power plays, the Generals have a better percentage at 17.13% compared to theirs (15.66%). Eugene has the league’s second-best penalty kill percentage at 87.94%, while Bellingham is not far behind at third with 87.01%.

As seen with the regular season matchups, goaltending for each team could have a very large impact on the outcome of this series. Pritchard and Zealand Walterscheid have been extremely effective between the pipes for the Generals, who rank third and fourth in the NPHL in save percentage at .930% and .920%, respectively. Second in that category is Bellingham’s Christopher Alexakis, who posted a .948% in eighteen games played. Broderick Parker has started in 22 games for the Blazers this season, and ranks fourth in goals against average with 2.47.

The Blazers also feature several players who rank near the top of the NPHL in scoring during the regular season. Karson DeRego led the NPHL in points with 72 (30 goals, 42 assists), while Smith was third with 63 (25 goals, 38 assists). Smith in particular has been a thorn in the side of the Generals; in six games played against Eugene, Smith had ten points (six goals, four assists).

Generals Head Coach Justin Kern discussed what his team needs to do in order to win a game or two in Bellingham this weekend. “We have to play a team game for all sixty minutes,” reiterated Kern. “We’ve been working hard all year as a team and now is the time for us to put it all together.”

Assistant Coach Daniel Gomez also talked about what the Generals must do to have success against the Blazers. “We can’t take no for an answer out there,” asserted Gomez. “We need to get to the dirty areas and go for every loose puck if we want to win this weekend.”

Fans can keep up with games one and two in Bellingham in a few different ways. The Blazers will provide up-to-date statistics through Pointstreak and stream the game live via Fast Hockey. Fans can also follow live updates from the Generals on Facebook and Twitter.

As alluded to before, playoff tickets for games three and four at the Rink Exchange in Eugene are on sale now. For those who cannot make to the Generals’ home games on March 18th and, potentially, 19th, the Eugene Generals Hockey Network (EGHN) will broadcast each live and for free online. Coverage begins fifteen minutes before the game starts.