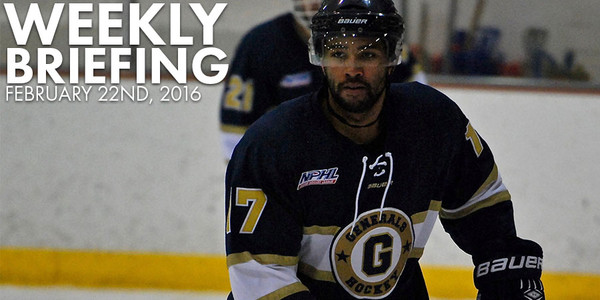 After a frustrating series in Eastern Washington this past weekend, the Generals now head home to regroup and prepare for a visit from the first place Wenatchee Wolves as the postseason is now less than a month away.

Heading into this past weekend, the Generals had posted a 5-1-0-0 record vs. the Outlaws this season, including outscoring them 14-4 in their previous two-game series against one another, a sweep by the Generals at The Rink Exchange just one month ago.

That trend appeared as if it would continue with less than five minutes off of the clock in the first period as Cole Bloemer opened up the weekend's scoring after an assist from fellow Alaskan Logan Sanders to put the Generals up 1-0. Youngster Christopher O'Shaughnessy got the start in net for the Generals on Saturday, and the Long Island native held the Outlaws at bay until the the 13:45 mark of the first period when Outlaws leading goal scorer Aaron Questad got the home side on the scoreboard with his (then) 27th goal of the season, tying the score at 1-1.

In the second period, Colton Symbol gave the Outlaws the lead at the 4:03 mark as he collected assists from both of the Questad brothers (Aaron and Travis) to put TC in the driver's seat, and they would not look in the rear view mirror from that point on. Symbol's strike kicked off a scoring spree in the second period that saw five total goals scored, four of which were by the Outlaws. When the dust settled on the second, TC took a 5-2 lead into the third period thanks to goals by Questad, Symbol, Payton Okon and Jacob Loman. Isaac Vincent scored the lone Generals goal in the second period.

That was plenty of breathing room for Outlaws goaltender Taylor Merkley as he turned away every shot faced in the third period and 29 of 31 faced overall as the Outlaws shocked the Generals and handed them a 5-2 loss, just their second loss to TC this season.

After Saturday night's disappointing showing against an undermanned Outlaws squad, the Generals got a chance at redemption as they hoped to pick up the win on Sunday and secure a series split.

Just like the night before, things started on the right foot for the Generals as Baxter Cox lit the lamp before the seats were even warm at Toyota Arena with his 13th goal of the season to give the Generals the early lead with less than three minutes gone. Eight minutes later, captain Christian "Buddy" Dale doubled the Generals advantage as he followed Cox's lead by also scoring an unassisted goal to quickly put hte Outlaws in a two-goal deficit.

Geno McCue's squad would get back on level terms before the period ended, however, as Adam Shimamoto scored less than a minute after Dale put the Generals up 2-0, and Jacob Loman would tie the game with only seven seconds left in the period as the slate was wiped clean heading into the second period.

The Outlaws momentum continued immediately out of the locker room as Adam Shimamoto scored his second of the evening with less than forty second gone in the second period, and the Outlaws again would not look back after that point. Aaron Questad (2), Colton Symbol and Payton Okon would all score while keeping the Generals offense at bay en route to a commanding 7-2 win and a weekend sweep over the Generals, the first sweep by the Outlaws over the Gens since December of 2013.

Zealand Walterscheid, who got the start in net for the Generals on Sunday evening, stopped 32 of 39 shots faced as the Generals were ocne again surprisingly outshot by the Outlaws.

All in all, it was a forgettable and frustrating weekend for the Generals who will have to view this past weekend as a wake-up call if they want to make some noise in the upcoming NPHL Cascade Cup Playoffs.

It was a wild weekend with teams criss-crossing all over the Northwest during a busy three-day stretch in the NPHL.

Friday night saw only one matchup with the West Sound Warriors playing host to the Seattle Ravens. West Sound, who's playoff hopes took a big hit the weekend before after suffering a two-game sweep at the hands of the Outlaws, hosted the fifth place Ravens hoping to deal a blow to their playoff hopes as well.

Seattle's struggles continued in 2016 as the NPHL's newest franchise is still searching for its footing in the new year after the Warriors dealth the Ravens a 6-3 loss to open up the weekend.

On Saturday, both teams made the return journey to Kent, Washington to face off in the Raven's home rink, but it was more of the same as the Warriors cruised to an easy 5-1 win and a weekend two-game sweep of the Ravens, keeping their (then) very thin playoff hopes alive, but unfortunately for them, the Outlaws' two wins this past weekend essentially eliminates West Sound from the playoff chase.

Meanwhile on Saturday, the league's top tewo teams in the standings faced off for a one-night-only affair in Bellingham. Despite the build-up, the game proved to be no contest as the Wolves finished off a perfect 8-0-0-0 regular season record vs. the Blazers thanks to a 6-1 win on Saturday.

The Wolves put up a field goal in the first period thanks to goals by Brayden Durante, Richie Stickle, and Hayden Givens to take a 3-0 advantage into the locker room, but Reese Fegen would make it a 3-1 game early in the sercond period as the Blazers showed signs of snapping the losing streak vs. the Wolves. However, Durante struck for his second just past the twelve minute mark of the second period, and both Thomas Hendry and Griffin Wiencek would add to the Wolves scoreline as they would cruise to the 6-1 win.

On Sunday, Wenatchee kept things rolling as they played host to the struggling Seattle Ravens. Despite the Wolves' offense failing to hit its stride in the first forty minutes, Ryan McKelvie's side still held a 3-0 advantage with twenty minutes to go after goals by Denton Hymer, Brayden Durante, and Coleton Booth. The flood gates would open in the final period, however, as the Wolves attack netted six goals in the final twenty minutes en route to a dominant 9-0 win to wrap up the weekend in the NPHL.

With only two weeks left of NPHL regular season action, the potential playoff matchups are almost locked in as the postseason approaches in the Northwest.

In a matchup that had already been expected, it is now official that the Generals and Blazers will meet in the first round of the upcoming Cascade Cup Playoffs. On the other side of the bracket, the only question that had remained was figuring out who Wenatchee would host in their first round matchup. After a second consecutive four-point weekend for the Outlaws, they now find themselves with a firm hold on that fourth and final playoff spot. Seattle, quite frankly, would need an absolute miracle now to catch TC in the standings while West Sound has already been mathematically eliminated.

On the regular season's final night, the Generals will spend the evening honoring the greatest part of our franchise... THE FANS!

Fan in attendence at Saturday, Febraury 27th's game vs. the Wenatchee Wolves will automatically receive a free, limited addition team poster, with opportunities after the game to get your poster signed and skate with the Generals team.

Fans can also get their posters or other Generals merchandise signed by the players after the game. In addition to getting autographs from the Generals players, fans also have the opportunity to skate with the team after the game during a public skate immediately following the game and autograph session.

“Our fans sticking by the Generals after a rough few years really shows how passionate and dedicated they are to hockey in this town," Generals team owner Ken Evans graciously explained. "Saturday will be a fantastic night for us to give back to our great fan base and a way to say thank you for making hockey in Eugene thrive over the last eleven years.”

Tickets for Saturday night’s game are available online at eugenegenerals.com or at the Generals’ ticket office located at the Rink Exchange. Tickets are $10 for adults, and $6 for seniors and students (with a valid I.D.); children under the age of five are free.

Join The Gens For Final Homestand

As the season begins to wind down, the Generals now have just TWO remaining home games in the regular season, a weekend series vs. the first-place Wenatchee Wolves. The Generals remain the only team in the NPHL to defeat Wenatchee this season, and they'll look to recreate that magic once more when the Wolves come to town for the home finale on Friday, February 26th and Saturday, February 27th.