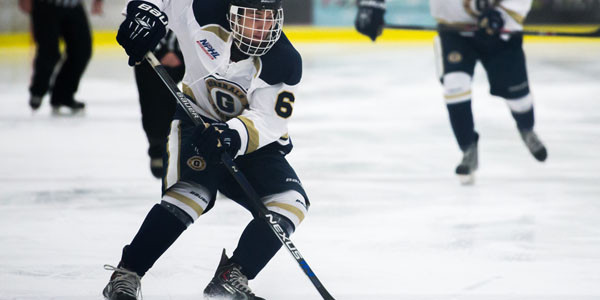 After jumping out to a 2-0 lead, the Generals allowed seven unanswered goals for their largest margin of defeat this season. The Generals were swept by the Outlaws for the first time since December 2013, when they lost a two-game series at the same arena.

The first two goals of the game were scored by Eugene, both of which were unassisted. Baxter Cox lit the lamp 2:22 into the contest, with Buddy Dale following with a goal of his own at 9:16. After this, however, the rest of the game would go south very quickly for the Generals.

Less than forty seconds after Dale’s goal, Adam Shimamoto trimmed the Outlaws’ deficit to one when the Questad brothers, Aaron and Travis, assisted on the play. With seven seconds left in the period, Jacob Loman tied the game at two apiece with his first goal of the night.

A minute and seven seconds into the second period, Shimamoto gave Tri-Cities their first lead of the night when he tallied his second goal of the game. Colton Symbol and Nick Gay each had assists on the go-ahead score. Aaron Questad then increased the Outlaws’ lead to 4-2 when he found the back of the net at the 3:57 mark.

Facing an uphill battle going into the third period for the second straight night, the Generals allowed three more goals on their way to a 7-2 defeat. Symbol, Aaron Questad, and Payton Okon all scored in the final period, securing the Outlaws’ fourth straight win.

Starting in his first game since shutting out the Seattle Ravens on February 5th, Generals goalie Zealand Walterscheid allowed seven goals to the Outlaws Sunday night, the most he has given up in a game this season. Facing 39 shot attempts, Walterscheid recorded 32 saves.

Next weekend, the Generals will hold their last home regular season games when they host the Wenatchee Wolves for a two-game series at the Rink Exchange Friday and Saturday night. Tickets are available online at eugenegenerals.com.