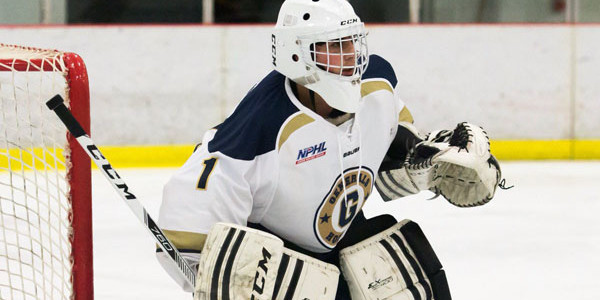 After jumping out to a 1-0 lead, the Generals would allow five goals—four in the second period alone—on their way to a third consecutive defeat.

Each team scored once during the first twenty minutes of action. Cole Bloemer notched the first goal of the game, coming on an assist from Logan Sanders to give Eugene a 1-0 lead. Tri-Cities tied the score at one later in the period, when Aaron Questad recorded a power play goal on assists from Jacob Loman and Colton Symbol.

The Outlaws began to take control of the game during the second period, scoring four times from four different players. Within the first eight and a half minutes of the period, Symbol, Payton Okon, and Loman scored sequentially to build a 4-1 advantage for the Outlaws.

Isaac Vincent was able to cut the Generals’ deficit to two with a late second period goal. His first and only goal of the game came at 17:34 of the period, with Dustin Gomez credited on the assist.

Shortly after, the Outlaws would score once more before the period’s end when Questad recorded his second goal of the night. The late goal with just over a minute left in the period would help Tri-Cities to a 5-2 lead going into the second intermission.

Despite eleven shots on net in the third and final period, the Generals could not muster any goals during the last twenty minutes, giving the Outlaws a 5-2 win and their third straight victory.

Rookie Chris O’Shaughnessy started in net tonight for the Generals, facing quite a bit of shots from the Outlaws. The 16-year old from New York set a personal best with the most saves in a game (24) during his young Generals career before Chris Pritchard took over in net for the third period.

The Generals and Outlaws play each other for the final time this season tomorrow at 5:05 PM. Fans can keep up with the game on Pointstreak or Fast Hockey, and through the Generals' Twitter as well.