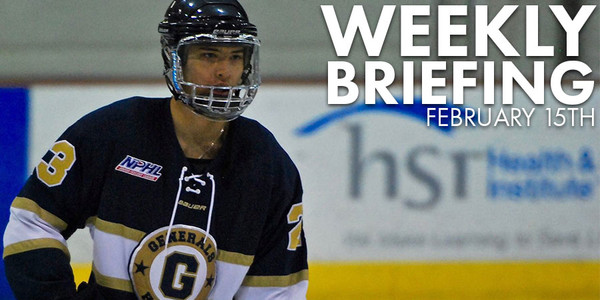 After a tough two-game series vs. the Bellingham Blazers, the Generals now look ahead to their second-to-last roadtrip of the season, a two-game tilt vs. the Tri-City Outlaws.

Entering the past weekend, the Generals still had hopes of jumping the Bellingham Blazers in the standings and stealing the second seed. In their previous matchup, a two-game series in Bellingham, the Generals handed the Blazers back-to-back home shutout losses for just the third and fourth times in Blazers franchise history.

With both sides still scoreless midway through the first period, R.J. Oki got the Blazers on the board first as he pounced on a lose puck on the slot and added a nice finish to beat Generals goaltender Christopher Pritchard over his left shoulder as the Blazers took the early 1-0 lead.

With the Blazers still leading 1-0 heading into the second period, they would quickly double their advantage as Simeon Smith, who was absent the last time these two met, beat Pritchard just over his outstretched right leg pad.

Smith netted his second of the evening less than three mintues later as sloppy play by the Generals in front of their own net once again came back to bite them with Smith sneaking into the slot and stabbing home the Blazers' third goal of the night.

The Generals would be heard from in the second period, though, as Issac Vincent found himself at the right place at the right time to bang home a lose rebound in front of Blazers goaltender Christopher Alexakis' net, cutting the Blazers' lead to 3-1.

However, Bellingham would regain their three-goal advantage midway through the third period as Brett Hanson would squeeze home the Blazers' fourth goal of the evening during yet another scramble in front of the Generals' net, and the Blazers would hold on to win by that scoreline, 4-1.

Following Friday night's loss, the Generals entered Saturday looking for a series split and some added momentum before the two sides prepare to face off again in the postseason.

Despite failing to score in any of the previous seven meetings between the two sides, NPHL scoring leader Karson DeRego finally broke through vs. the Generals and gave the visitors a 1-0 lead with a beautiful snipe from the near circle just 29 seconds into the Blazers' power play.

The Blazers' lead would prove to be short-lived as Logan Sanders connected on a one-timer from just inside the blue line to beat Blazers' goaltender Broderick Parker and tie the score at 1-1, with Sanders' goal coincidentally also coming 29 seconds into a power play.

Four minutes later, the Generals would take their first lead of the evening, once again coming on the power play as defenseman Brett Sparks unleashed a one-timer of his own that rocketted past Parker in net to give Eugene the 2-1 advantage.

DeRego would level the score and strike for his second goal of the evening just fourteen seconds into the second period, but the Generals' one-goal advantage would be restored on the power play once more as defenseman Nash Berkowitz jumped on top of a jucy rebound in front of Parker's net and snuck a shot through three bodies scrambling through the crease to put the Generals up, 3-2.

That scoreline would hold until late in the final period when the Generals would go on the penalty kill and surrender the tying goal as Simeon Smith scored his third goal of the weekend to tie the game at 3-3 and force overtime.

Playing a four-on-four, five-minute overtime format, both sides each had multiple chances to seal the game but were unable to do so until the game's final moments when DeRego, racing to collect the puck in the corner, spun and fired a wishful wrist shot towards the net that somehow, some way deflected past the Generals' goaltender and in with just one second remaining on the clock.

The ending was a heartbreaking stunner at The Rink Exchange as Blazers celebrated an improbable comeback and an even more unlikely ending, capping off a wild two-game series in Eugene, Oregon.

In the loss, Generals goaltender Christopher Pritchard stopped 40 of 44 shots faced while Parker stopped 30 of 33 shots faced for the Blazers.

DeRego, who had tallied just one point vs. the Generals over their previous three combined meetings, finished Saturday with a hat trick while Kevin Duncan of the Blazers and Baxter Cox and Cody Arbelovsky of the Generals all collected two assists apiece.

With the Wenatchee Wolves and the Seattle Ravens both idle this past weekend, the NPHL's lone other series was a two-game, home-and-home series featuring the Tri-City Outlaws and the West Sound Warriors.

Kicking things off on Friday night in Bremerton, the Outlaws entered the weekend with a three point cushion over both the Warriors and Ravens for the fourth and final playoff spot, with the Outlaws having eight games remaining on their regular season schedule while the Warriors had just seven.

Friday's much anticipated matchup proved to be no contest as the Outlaws silenced the home crowd early and often in the first period, scoring three goals (two of which were short-handed) in the first twenty minutes to take a 3-0 lead into the locker room.

Outlaws forward Adam Shimamoto finished with a hat trick while Payton Okon added two goals of his own and goaltender Jimmy Grosklaus stopped 33 of 35 shots faced.

On Saturday, both sides faced off in Kennewick, Washington as the Outlaws looked to complete the sweep while the Warriors faced a seemingly must-win situation in order to keep their playoff hopes alive.

With both offenses held at bay through most of the first period, Scotty Perkins got the visitors on the scoreboard first as the veteran lit the lamp with less than a minute to go in the period to give the Warriors a 1-0 lead.

However, that lead would only last until two minutes and thirty seconds into the second period when Adam Shimamoto scored his fourth goal of the series to tie the game at 1-1. That kicked off a second period scoring spree for the Outlaws that saw them net four unaswered goals en route to a 4-1 lead after forty minutes of play.

Aaron Questad scored the Outlaws fifth of the evening early in the third period, and after both sides traded goals midway through the third period, the Outlaws seemingly had a commanding hold on the game with a 6-2 lead. However, West Sound scored three times in a five minute span and cut the Outlaws advantage to just one with less than seven minutes to play, but captain Aaron Questad answered the bell and gave the home side some breathing room as he scored his second goal of the period with just over five minutes left, capping off the scoring and sealing a 7-5 win and a weekend sweep of the Warriors.

Alec Johnson and Scotty Perkins of the Warriors each finished with two goals apiece while Payton Okon and Aaron Questad of the Outlaws did the same. Meanwhile in net, Taylor Merkley got the start for the Outlaws and stopped 19 of 24 shots faced.

With another weekend of NPHL action in the rear view mirror, the playoff picture is starting to come into focus as we prepare for postseason play in the Northwest.

After the Blazers sweep over the Generals, Bellingham has all but officially locked up the second seed in the upcoming Cascade Cup Playoffs as they will prepare to host the Generals for Games One and Two in the opening round.

Meanwhile, the Outlaws took two major steps towards locking up a postseason berth after sweeping the Warriors in a two-game series, and they now control their own destiny throughout the remainder of the season.

Looking at the standings as we head into the home stretch, the Warriors now need plenty of help in order to make a late postseason run, but the Ravens still very much have a chance to catch the Outlaws. Despite being seven points back in the standings, the Ravens have eight remaining regular season games while the Outlaws have just six, and the two teams will face off against one another a whopping four times down the stretch, including a home-and-home series on the final weekend of the regular season.

In case your curious, here's the scheudle for the four remaning games between the Outlaws and Ravens:

Join The Gens For Final Homestand

As the season begins to wind down, the Generals now have just TWO remaining home games in the regular season, a weekend series vs. the first-place Wenatchee Wolves. The Generals remain the only team in the NPHL to defeat Wenatchee this season, and they'll look to recreate that magic once more when the Wolves come to town for the home finale on Friday, February 26th and Saturday, February 27th.