Generals Pull Away from Ravens in Third Period 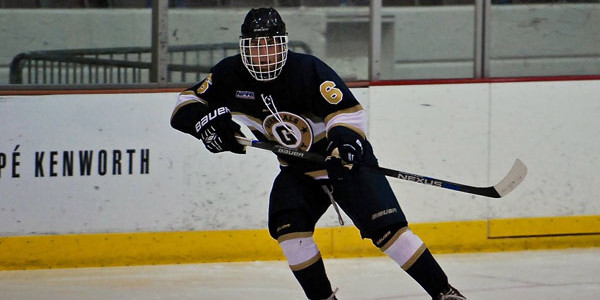 One night after shutting out the Ravens, the Generals completed the weekend sweep in the last matchup between the two teams this regular season. With tonight’s victory, the Generals have now won 21 games, guaranteeing themselves a winning percentage above .500 this season.

With 57 seconds left in the first period, Baxter Cox put the Generals up 1-0 with a goal on assists from Cody Arbelovsky and Brett Sparks. Even with 39 shots on goal in the first and second period combined, Cox’s goal would be the only one until the final period of play.

Seattle’s Grant Omyer tied the game at one in the third period when he scored on a breakaway. His unassited goal came at the 9:25 mark of the period.

The game would not be tied for very long, as the Generals took the lead for good less than a minute later at 10:22. Kory Palmer scored on passes from Isaac Vincent and Dustin Gomez, helping the Generals to a 2-1 advantage.

Within the next five minutes, the Generals would add two more goals for a 4-1 final score. Josh Hawn recorded the team’s third goal at 13:48, while Gomez tallied his fourth goal of the weekend at 15:31 of the third period.

Starting in his fifth game of the season, Generals goalie Chris O’Shaughnessy allowed just one goal in net Saturday night while saving 20 shots against. His one goal allowed was the fewest he has given up in any of his five starts on the season.

The Generals complete their four-game home stand next weekend when they host the Bellingham Blazers next Friday and Saturday night at 7:35. Tickets for both games are available online at eugenegenerals.com.