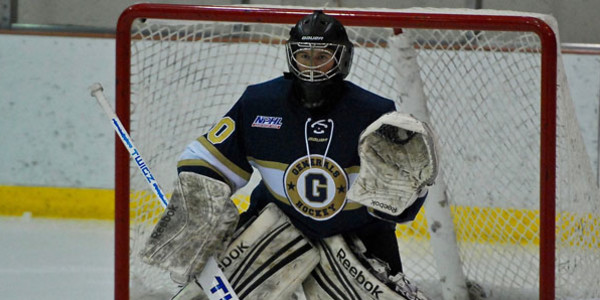 In a busy night full of goals and penalties, the Generals started the four-game home stand on the right track. Dustin Gomez recorded his first career hat trick, Zealand Walterscheid earned his third shutout this season, and nine different Generals players had at least a point Friday night.

The Generals started the scoring early and often with five goals in the first period alone. Jacob Ray scored his fourth goal of the season 3:59 into the game, while Gomez and Buddy Dale each tallied two goals in the period. Gomez lit the lamp at 7:07 and 10:27, with Dale scoring within a thirteen-second span at 9:14 and 9:27.

After a scoreless second period, the Generals ended the night with three third period goals to start the weekend out with the win. Gomez netted the hat trick at 5:47 into the period, with Isaac Vincent and Nash Berkowitz each recording goals at 10:14 and 12:21, respectively.

In just his eleventh start of his junior hockey career, Walterscheid recorded his third shutout of the year, and his second against Seattle. He stopped all eighteen shots against, helping him to his eighth win on the season.

The Generals close out the weekend tomorrow night at 7:35 against the Ravens. For every ticket sold tomorrow night, the Generals will donate $2 to the March of Dimes Foundation, an organization dedicated to improving the health of newborn babies by fighting premature births and preventing birth defects.