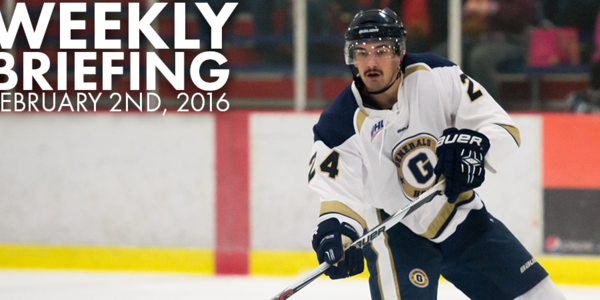 Despite mixed results in this past weekend's games vs. the Wolves and Warriors, the Generals were able to lock up a return to the postseason, their tenth playoff berth in eleven years.

Starting off the busy weekend with a home game vs. the first place Wenatchee Wolves, the Generals hoped to repeat the magic they created on December 10th when they handed the (then) undefeated Wolves their first (and only) loss of the season.

For two periods, Thursday night felt very much like December 10th all over again. Despite being overwhelmed in the shot totals the Generals took the early 1-0 lead on a beautiful finish from Logan Sanders, and they held that advantage heading to the locker room after the first period.

Wenatchee struck back to level the score at 1-1 just past the midway point in the second period, but the Generals immediately responded on a beautifully executed two-on-one with Dustin Gomez and Kory Palmer combining to put the Generals back up by one.

The Generals held on to that one-goal lead until the waning seconds of the second period as Wenatchee would again level the score, this time off the stick of Will Connors. With less than two minutes gone in the third period, the Wolves took their first lead of the season at The Rink Exchange as Thomas Hendry capitalized on the power play to beat Pritchard in net.

Eight minutes later, Will Connors scored his second goal of the evening to double the Wolves' lead, and goaltender Bronson Moore turned away every shot faced in the final 30 minutes of the game as Wenatchee snuck away with a 4-2 win in Eugene.

Looking to bounce back after Thursday night's loss on home ice, the Generals hit the road and faced a quick turnaround vs. a red-hot Warriors squad that entered the weekend 3-0-1-0 in their previous four games.

West Sound opened up the scoring in the first period as NPHL veteran Caleb Bromley was able to beat Walterscheid with a shot from just inside the blue line, but the Generals would tie the game five minutes later as Eugene native Jack Geisler would score his second goal of the season.

The Warriors would retake the lead in the second period as Garrett Little would pounce on top of a fortunate bounce in front of the net to put the Warriors back up, 2-1, and Scotty Perkins would make it a 3-1 game in the third period with a nifty finish on a breakaway to beat Walterscheid.

The Generals would respond, though, with back-to-back goals in the third period, the first coming from Baxter Cox and the second from Isaac Vincent, eventually forcing overtime at the Bremerton Ice Arena.

After both sides were held scoreless in the five minute overtime period, the two sides moved on to a shootout, the Generals' first shootout this season. Kenneth Griffin, the first shooter for the Generals, got things started on the right foot as he beat Warriors goaltender Austin McCain. However, Griffin would be the only General to score in the shootout as Scotty Perkins, Alec Johnson, and Garrett Little would all score for the Warriors, with Little locking up the 4-3 shootout win for the Warriors in front of the home crowd.

After seeing their eight-game win streak end with back-to-back losses, the Generals looked to finish the weekend on a high note as two points vs. the Warriors on Saturday would officially lock up a return to the postseason for Eugene.

The Generals wasted no time opening the scoring on Saturday as Cole Blomer quickly took advantage of a West Sound penalty to give the Generals a 1-0 lead with his first PP goal of the season. Sixteen minutes later Baxter Cox would double the Generals advantage as they carried a 2-0 lead into the first intermission.

In the second period, Dustin Gomez would make it a 3-0 lead after just three minutes, and after a Brett Hawkins goal for the Warriors that made it a 3-1 game, Isaac Vincent and Cole Bloemer would both score to push the Generals' lead up to 5-1 after two periods.

Two more goals coming in the third period would cap the weekend off as both Dustin Gomez and Logan Sanders would both score in the game's final twenty minutes to help lock up a 7-1 win over the Warriors in the weekend finale.

Goaltender Zealand Walterscheid was solid in net, earning his seventh win of the season while stopping 23 of 24 shots faced.

With the win, the Generals officially locked up a return to the postseason, their tenth trip to the Cascade Cup Playoffs in their eleven seasons of existence.

Following up their 4-2 win over the Generals on Thursday night, the Wenatchee Wolves returned to Washington to kick off a two-game home-and-home series with the Tri-Cities Outlaws, starting on Friday in Kennewick, Washington.

The first place Wolves showed no signs of sluggishness after a gritty road victory the night before as they raced out to a quick 4-0 lead after the first period, partly thanks to Coleton Booth's first period hat trick. Booth would add two more in the second period and his teammates would add four goals themselves as the Wolves would go on to an easy, 10-2, win over the Outlaws in a chippy game that saw a total of 58 penalty minutes (30 for Wenatchee, 28 for Tri-Cities).

After an off day on Saturday, both sides squared off once again on Sunday, this time in Wenatchee at the Town Toyota Center. With some of the tension from Friday night's affair still lingering over both squads, the Wolves jumped out to an early 2-0 lead and it looked as if it would be a repeat of Friday night all over again.

However, the Outlaws would repsond with two goals in less than two minutes to tie the score, and the two sides would trade goals once more time before heading into the first intermission tied at 3-3.

That woke the Wolves up from their slumber, though, as Coach McKelvie's young squad scored just 38 seconds into the second period to regain the lead, and they would not look back. Five different Wolves players would light the lamp throughout the remainder of the game as Wenatchee would cruise to a 9-4 victory, their 11th straight win.

Meanwhile, the Bellingham Blazers and Seattle Ravens also squared off for a home-and-home series this past weekend as the Ravens looked to gain ground on the Outlaws for the fourth and final NPHL playoff spot.

With the series starting on Friday night at the Bellingham Sportsplex, the Blazers quickly let the home crowd know this would would be a rout as Reese Fegen would score twice in the game's opening 50 seconds to give Bellingham the 2-0 lead before the seats were even warm in the stands.

Stephen Smith, RJ Oki, and Sam Vizenor would also all score in the period to give the Blazers a commanding 5-0 lead after just twenty minutes of play.

After no goals were scored in the second period, the other Smith (Simeon) got on the scoresheet to put the Blazers up 6-0, which was then quickly followed by Rese Fegen scoring to complete his hat trick to put the Blazers up 7-0. With less than eight minutes to go, Brett Hanson would add the eighth and final goal of the evening as goaltender Christopher Alexakis notched the shutout and the Blazers picked up an emphatic 8-0 win over the Ravens.

Just 24 hours later, both sides would face off again, this time at "The Raven's Nest" just outside of Seattle. The Ravens raced out to a surprise 2-0 lead after two goals from Johnny Scherer in the first six minutes of play. After shaking off the initial shock, the battle-tested Blazers responded with three unswered goals of their own to close out the period and head in to the locker room with a 3-2 lead after twenty minutes.

After Brett Hanson scored the only goal of the second period to give the Blazers a 4-2 lead, Mark Klasen would score twice in the third and Meetsma would add another as the Blazers eventually found plenty of breathing room in a 7-2 road win over the Ravens.

Looking ahead to this weekend, here's the NPHL schedule as once again every team will be in action:

As the postseason rapidly approaches, the playoff picture is starting to come into focus as the race for seeds and spots heats up. Currently, the Wolves find themselves sitting pretty atop the NPHL, and have all but officially locked up the #1 seed for the upcoming Cascade Cup Playoffs.

Meanwhile, the race for the second seed appears to have become a little clearer after Eugene's missteps this past weekend. Despite picking up three points, the Generals had little room for error if they wanted to catch the Blazers in the standings, and now they find themselves eight (8) points back with only ten (10) regular season games left for the Generals while the Blazers have eight (8) regular season games left on their schedule. Both teams face off two more times before the regular season concludes: February 12th and 13th at The Rink Exchange in Eugene, Oregon.

If the season ended right now, here's the Generals' potential playoff dates/times for the first round:

Lastly, the race for the fourth and final playoff spot continues tighten up as West Sound continues their second half resurgence. After picking up three of a possible four points vs. Eugene this past weekend, West Sound now moves into a tie for fifth with the Seattle Ravens while also pulling to within just three points of Tri-Cities, who currently sits in fourth place.

Tyler Poulsen, a member of the Eugene Generals for two seasons from 2008-10, was named as the WCHA Rookie of the Week yesterday after tallying two points (goal, assist) in a two-game series at the University of Alaska, Anchorage as the Chargers would go on to split the series vs. the Seawolves.

HKY BREAKING: Tyler Poulsen is the WCHA Rookie of the Week! #UnitedWeCharge pic.twitter.com/aRwWH9kY4x

Poulsen, in his first season with the Chargers, tallied 73 points during his time in Eugene before moving on to the United States' only Tier II Junior Hockey League, the North American Hockey League.

There, Poulsen played for Aberdeen Wings (2010-11) and the Odessa Jacklopes (2011-12) before joining the Topeka Roadrunners for the 2012-13 season, culminating in a magical 2013-14 season with the Roadrunners that saw Poulsen finish second in the NAHL in goals (29) and fourth in overall points (61) as the Roadrunners finished the regular season with 84 points, the third best mark in the league.

Poulsen would finish his 185-game NAHL career with 57 goals, 58 assists, and 115 overall points before signing his letter of intent to play for the NCAA's southern-most Division 1 hockey program.

The Arvada, Colorado native currently has five points on the season with the Chargers (three goals, two assists) with three of those points coming in the Chargers' last four games.