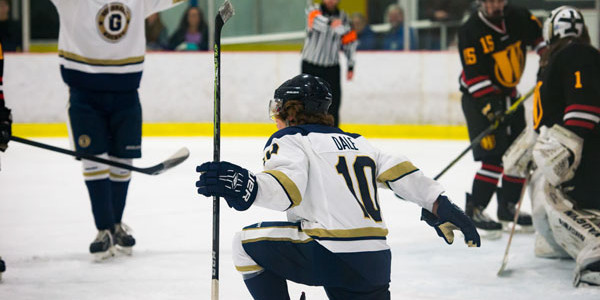 With tonight’s win, the Generals are officially back in the Northern Pacific Hockey League (NPHL) Playoffs for an unprecedented tenth time in franchise history. The Generals return after missing out on the playoffs a season ago.

Playing in their third game in as many days, the Generals responded with a seven-goal effort after losing the previous two nights. Ten different Generals players had at least a point tonight, with six recording multiple points.

Never trailing in tonight’s game, the Generals scored twice in the first period for a 2-0 advantage after the first twenty minutes of action. Cody Arbelovsky scored on the power play 3:18 into the game, with Buddy Dale and Nash Berkowitz providing the assists. With 58 seconds left in the period, Baxter Cox recorded his second goal of the weekend on assists from Josh Hawn and Arbelovsky.

Both teams exchanged goals to start the second period, with Eugene scoring at 2:59 followed by West Sound at 6:23. Dustin Gomez tallied the Generals’ third goal of the evening, with assists given to Isaac Vincent and Arbelovsky. Brett Hawkins scored the lone goal for the Warriors, as he trimmed his team's deficit to 3-1.

The Generals added two more goals to close out the second period, one scored by Vincent and the other by Cole Bloemer. Vincent connected at 10:24 of the period on assists from Dale and Kenny Griffin. Bloemer scored his first of the night at 13:37, with Dale and Logan Sanders setting him up to increase the lead to 5-1.

In the third period, the Generals added two more goals for a final of 7-1. Gomez recorded his fourth multi-goal game of the season when he lit the lamp on the power play at 7:23. Gomez then assisted on a goal by Sanders two minutes later at 9:50, who tallied his fifth goal of the year.

Starting in net for the second straight night, Generals goalie Zealand Walterscheid picked up his seventh win of the year. Stopping 23 of 24 shots, tonight marked the fourth time Walterscheid has allowed one goal or fewer in a game this season.

After tonight, the Generals now enter a busy month of February, beginning with a four-game home stand starting next weekend. The Generals will host the Seattle Ravens next Friday and Saturday night at 7:35 PM at the Rink Exchange. Tickets are available online at eugenegenerals.com.