Generals Fall to Warriors in Shootout 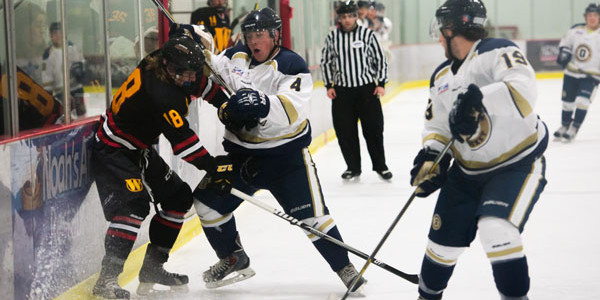 After losing last night at home to the first-place Wenatchee Wolves, the Generals began a two-game road series Friday night against the Warriors. The Generals played in their first overtime or shootout since December 2014.

The Warriors, who never trailed during Friday’s game, scored first when Caleb Bromley fired a shot by Generals goalie Zealand Walterscheid. Bromley’s goal was unassisted, coming midway through the first period at 10:35.

A few minutes later, Generals forward Jacob Ray passed the puck up to Jack Geisler, who shot it in front of the blue line and found the back of the net. Geisler, who is from Eugene, recorded his second goal of the year, which happened at 14:53 of the first period to tie the game at one.

At 9:18 of the second period, West Sound’s Garrett Little scored in front of the net to help his team regain the one-goal advantage. Bromley assisted on the play, giving the Warriors a 2-1 lead.

Exactly three minutes into the final period, Scotty Perkins provided the Warriors an insurance goal to put his team up 3-1.  Chris Mitchell and goalie Austin McCain each recorded assists on West Sound’s third score of the night.

Eugene responded quickly, when Baxter Cox cut into their deficit with his first goal of the contest. Josh Hawn was credited with the assist, coming at 4:09 of the third period.

With about eight minutes remaining in regulation, Buddy Dale’s shot sailed over the net, but bounced off the boards right back to Isaac Vincent, who put the puck in to tie the game at three apiece. The final goal in regulation came at 12:02 of the third period, with the assist given to Dale.

After five minutes of overtime could not determine a winner, the Generals went to their first shootout of the season to decide the outcome. Both teams scored in the first round, with Kenny Griffin scoring for Eugene and Perkins for West Sound. After Cody Arbelovsky, Brett Hawkins, and Cox failed to score, West Sound’s Alec Johnson connected to give his team a 2-1 advantage. With Dustin Gomez not scoring for Eugene, Garrett Little secured the win for the Warriors in the fourth round, as they outscored the Generals 3-1 in shootout.

Despite losing in shootout, the Generals were still able to gain one point in the NPHL standings. For West Sound, they now trail the Tri-Cities Outlaws by three points for the fourth and final playoff spot with tonight’s victory.

The Generals and Warriors close out the two-game series tomorrow night at 7:35 for their final regular season matchup. Fans can follow tomorrow night’s action on Pointstreak and Fast Hockey; the Generals will also provide updates throughout the game on Twitter.