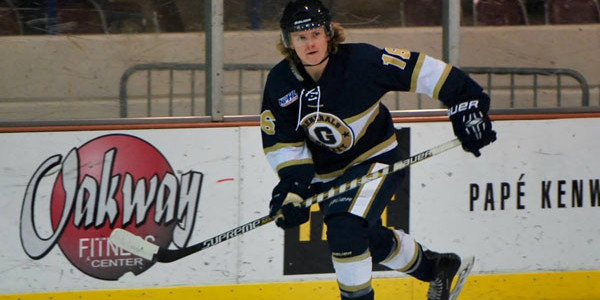 Entering tonight, the Generals were riding a season-long eight game winning streak, with their last loss dating back to early December. The eight consecutive victories marked the team’s longest winning streak in the last six years.

Wenatchee overwhelmed Eugene with a whopping 72 shots on net, compared to 24 for the Generals. After posting back-to-back shutouts against the Bellingham Blazers last weekend, Chris Pritchard was once again brilliant in net, as he recorded a career-high 68 saves against the Wolves. However, the Wolves would score just enough times to hand the Generals a 4-2 defeat.

The Generals would strike first with a goal 5:33 into the game. Logan Sanders took the puck himself for an unassisted goal, the only one of the first period.

Coleton Booth of Wenatchee tied the game at one when Max Roth and Tom Ignatovich set him up for the equalizer. Booth’s goal came midway through the second period at 10:48.

Eugene rebounded quickly with a go-ahead goal a little over a minute later at 11:56 for a 2-1 lead. Kory Palmer tallied the goal, with Dustin Gomez credited for the assist.

With two minutes left in the second frame, Will Connors tied the game for the Wolves with his first goal of the night. Hunter Alden recorded the assist on the play, coming at 17:57 to make it a 2-2 contest going into the final intermission.

During the third period, the Wolves scored two times to secure their ninth win in a row. Thomas Hendry scored what would be the game-winning goal, coming on a power play at 1:17 of the final period. Connors provided an insurance goal at 9:55, as he scored right in front of the net for his second of the night.

After tonight, the Generals will travel north to Bremerton, Washington for a pair of road games against the West Sound Warriors. The two teams will square off Friday and Saturday night at 7:35 PM, and fans can follow the action in Bremerton on Pointstreak or Fast Hockey.