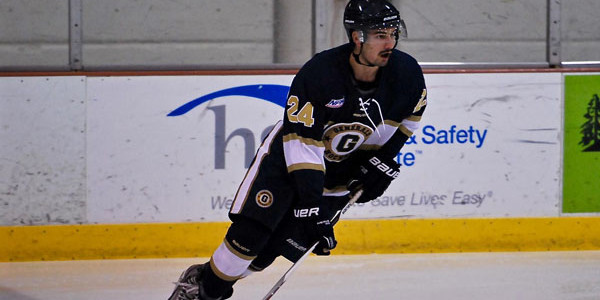 The Eugene Generals (18-9-0-0) will play three games this weekend, starting with a home game Thursday night against the Wenatchee Wolves (27-1-0-0) followed by a two-game road series against the West Sound Warriors (5-22-1-1).

Currently on an eight-game winning streak, the Generals look to continue their recent success in a tough three-game stretch this weekend. The Generals host the Wolves on Thursday at 6:05 PM at the Rink Exchange, then travel to Bremerton, Washington for a pair of away games Friday and Saturday night at 7:35 PM against the Warriors at the Bremerton Ice Center.

Similar to Eugene, the Wolves are also riding an eight-game winning streak coming into Thursday’s matchup. In the last meeting between these two teams, the Wolves suffered their first and only loss of the season, which also came on a Thursday night back on December 10th. The Generals never trailed during the game and, thanks to Chris Pritchard’s career-high 51 saves, were able to prevent Wenatchee from scoring in the final period.

Coming off back-to-back shutouts last weekend against the Bellingham Blazers, Generals goalie Chris Pritchard looks to continue his hot streak. During the team’s winning streak, Pritchard, who was just named NPHL Goalie of the Week, has posted a 5-0 record to go along with an astonishing save percentage of 97.6%. He has also allowed just five goals during that five-game stretch.

Offensively, the Generals’ top scorers—Buddy Dale, Cody Arbelovsky, Dustin Gomez, and Cole Bloemer—have provided much of the offensive production since returning from the holiday break. In the four games during 2016, Dale has led the way with nine points, followed by Arbelovsky who has six himself. Gomez and Bloemer each have four points apiece in the past four games, helping a Generals offense which has accumulated 18 goals since the break.

Fighting for the fourth and final playoff spot, the Warriors have a lot to play for with eleven games left on the season. The Warriors have been playing well as of late, winning three of their last four games to enter the race for the playoffs.

Going into last weekend trailing the Tri-Cities Outlaws by just four points for that coveted final playoff spot, the Warriors failed to capitalize on gaining ground during the head-to-head two-game series. Leading Tri-Cities 4-0 during last Friday’s game, the Warriors allowed the Outlaws to tie the game and force overtime. Despite winning the game and earning two much-needed points in the standings, the Warriors also allowed Tri-Cities to gain a point as well. Coupled with a 5-1 loss the following night, West Sound fell to five points behind the Outlaws after the two head-to-head matchups.

This weekend will be the last games between the Generals and Warriors this season. The Generals and Wolves, however, play each other four more times to close out the regular season. Wenatchee has already clinched a playoff berth, while the Generals have the opportunity to secure one this weekend.

Tickets for Thursday night’s game against Wenatchee are available online at eugenegenerals.com. For those cannot make it to the game, EGHN will broadcast the game live and free online.