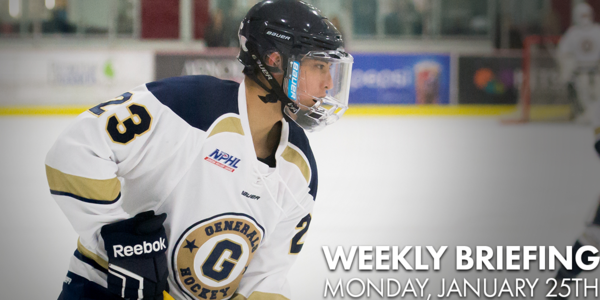 For the seventh time this season, and the fourth time on the road, the Generals notched a two-game series sweep this past weekend, this time over the Bellingham Blazers, extending the Generals' current win streak to eight games.

However, Generals' current winning streak stands as only a footnote to the streak that the Generals really had their eye on this weekend - snapping their own losing streak to the Blazers that stretched back to the 2012-13 season, which they did in emphatic fashion.

Powered by Christopher Pritchard's performance in net and three highlight goals, the Generals shocked the home crowd at the Bellingham Sprotsplex as they handed the Blazers a 3-0 shutout loss, the Generals' third shutout the season.

"It felt great to get the monkey off of our backs," Head Coach Justin Kern ackowledged after Friday night's win. "The team is playing real Generals hockey right now. We've proven we can take anyone in the league right now, and we just want to continue with the success from there."

The Generals would jump out to a 1-0 lead early in a first period that saw the Generals dominate the shot total, 16-5. With the two sides playing four-on-four hockey early in the first, Kenneth Griffin softly chipped the puck up from the Generals defensive zone up and off the boards to a streaking Dustin Gomez. The puck fell perfectly to Gomez's waiting stick, and just as the Blazers got back to five skaters, Gomez nicely picked out Kory Palmer to his left and the Salt Lake City native quickly sniped the puck into the top-right corner of the net to give the Generals the early 1-0 lead.

That scoreline would hold all the way until the third period when Cody Arbelovsky added to his team-leading point total with a brilliant coast-to-coast goal to give the Generals some much appreciated insurance late in the game. After picking up the puck at the top of the defensive zone circle, Arbelovsky then went the distance as he weaved past three Blazers in the slot before ripping home his 18th goal of the season.

Not to be outdone by Arbelovsky, Generals forward Baxter Cox concocted his own wonder-goal with three mintues left to put the game out of reach, wasting no time after a defensive zone faceoff by quickly snatching up the puck before beating two Blazers through the neutral zone and finishing five-hole on Blazers goaltender Broderick Parker to put the cherry on top of a massive victory for the Generals.

The evening's fireworks weren't done just yet, though, as tempers flared after Blazers forward Austin Sabin received a Major Penalty for Cross Checking and a Match Penalty for Deliberate Inury, a dangerous play with less than thirty seconds left in the game that resulted in Generals captain Christian "Buddy" Dale being roughed up well away from the puck. As a result, Sabin is suspended until a hearing is held regarding the Match Penalty.

Entering this past weekend, the Bellingham Blazers had only been shutout twice at home in their franchise's history. After Saturday night's performance, the Generals had doubled that total in a matter of 48 hours.

Goaltender Christopher Pritchard put together another 40-save, shutout performance, his third shutout of the season so far, while captain Christian "Buddy" Dale scored the only goal of the game, benefitting from plenty of good fortune as a dump-in from the red line took a wild bounce off of a stantion along the boards, ricochetted towards the net, and snuck just past Blazers goaltender Broderick Parker for one of the wildest goals of the season.

Pritch's performance this past weekend vs. the Blazers has been unmatched in the NPHL as the Tualitin, Oregon native is the only goaltender in the Northwest this season to back post shutouts on back-to-back days, and he did so against a Blazers offense that averaged over five goals per game entering this past weekend. His back-to-back shutouts also marks the first time a Generals goaltender has done so since Matt Bartels shutout the Puget Sound Tomahawks and River City Jaguars on consecutive nights during the 2010-11 season.

With this past weekend's sweep, the Generals are now 3-0 in their last three games combined vs. the second place Bellingham Blazers and first place Wenatchee Wolves after starting the season a combined 0-6 against the two squads. With the Wolves scheduled to play in Eugene for a midweek game this Thursday, the Generals will have to quickly turn their attention towards a high-octane Wolves squad that has only been beaten once in NPHL play this season... which was at the hands of the Generals back on December 10th:

The West Sound Warriors and the Tri-Cities Outlaws split a two-game home-and-home series this past weekend, with the road team winning each matchup. On Friday, a wild game saw the Warriors jump out to a 4-0 lead after twenty minutes of play, only to see the Outlaws respond in the second period with four goals of their own to tie the game at 4-4 entering the third. The Outlaws would take their first lead of the game midway through the third period thanks Adam Shimamoto's second goal of the evening, but Warriors forward Scotty Perkins silenced the home crowd late in the third with the equalizer, and Alec Johnson scored the winner less than two mintues into OT to cap off one of the wildest games in the NPHL this season.

In the rematch on Saturday, the Outlaws left little doubt this time around as Shimamoto scored a pair of goals for the second straight night and goaltender Taylor Merkley stopped 25 of 26 shots faced in a 5-1 win for the Outlaws in Bremerton, Washington.

Also this past weekend, the Wenatchee Wolves and Seattle Ravens faced off as Ravens entered the series looking for a big upset in hopes of keeping pace with the Outlaws for the fourth and final playoff spot. However, there was no upset to be found as the Wolves dominated both games with wins of 14-1 (Friday) and 7-0 (Saturday) to keep the Ravens stuck on 14 points. Will Connors filled up the stat sheet on Friday with an eye-popping seven point performance (two goals, five assists) while Hunter Alden and Griffin Wiencek each finished the weekend with eight points in the two-game series.

Looking ahead to this upcoming weekend, it's another full slate of games as every NPHL team will once again be in action:

As the postseason rapidly approaches, the playoff picture is starting to come into focus as the race for seeds and spots heats up. Currently, the Wolves find themselves with little to worry about as they've already clinched a playoff spot and currently sit eleven points clear of the second place Bellingham Blazers with two extra games also in hand.

Meanwhile, the race for second took a dramatic shift this past weekend with the Generals two-game sweep over the Blazers. With nearly two-thirds of the season in the rear view mirror, the third place Generals now find themselves within seven points of the Blazers while also holding an extra three games in hand. The two teams face off two more times this season: February 12th and 13th at The Rink Exchange.

Meanwhile, the race for the fourth and final playoff spot continues to heat up as the resurgent West Sound Warriors have come alive with seven points in their last four games to shake up the playoff race. Currently, the Outlaws sit in the driver's seat with 28 games played and a three point lead over the Seattle Ravens, who have also played 28 games thus far. The Warriors, sitting five points back of the Outlaws, still have plenty of work to do and one less game to do it in (29 games played) but they've shown to be the hottest of the three teams vying for the final playoff spot. Find the full standings at NPHLonline.com.

Remember to follow the Generals on Facebook and Twitter for updates, highlights, and behind-the-scenes content throughout the season. Visit EugeneGenerals.com to purchase tickets to the next Generals home game this Thursday, January 28th at 6:05pm as the first place Wenatchee Wolves come to Eugene for just the second time this season.