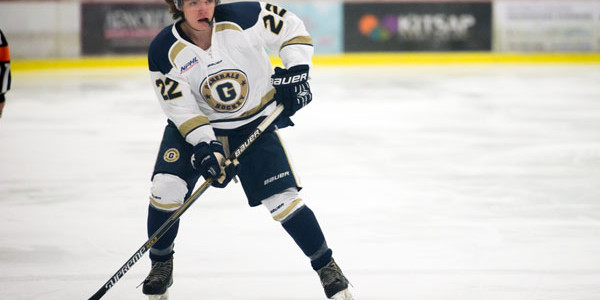 One night after defeating Bellingham for the first time this season, the Generals won again for the second time in as many days. With the weekend sweep of Bellingham, the Generals are now on an eight-game winning streak and trail the Blazers by just seven points for second place in the NPHL standings.

For the second straight night, Generals goalie Chris Pritchard shutout the Blazers, who have now been held scoreless in three consecutive games. Pritchard became the fourth goalie in Generals history to record shutouts in back-to-back games, joining others such as Matt Bartels, Dylan Woodring, and Chris Beadles. Pritchard saved 40 shots Saturday night, giving him a total of 84 saves during the two-game series sweep in Bellingham.

With just under two minutes left in the first period, Buddy Dale scored what would be the lone goal of the game when he lit the lamp on the power play. An unassisted goal, Dale scored at the 18:17 mark of the first period, as he got by Blazers goalie Broderick Parker for the only score of the night.

In their eleven-year history, the Generals had only been involved in one game with a 1-0 final score, which happened in a loss back on November 18, 2010. Tonight marks the first time in franchise history where the Generals defeated an opponent by a score of 1-0.

Generals Head Coach Justin Kern expressed how impressed he was by his team’s effort tonight, but acknowledged how they need to start getting ready for next weekend.

“Pritchard was amazing in net tonight,” stated Kern. “Our team did a great job of clearing pucks away from our net and Pritchard locked it down. As far as sweeping Bellingham goes, it was great. However, it’s in the past now. We had a great team effort this weekend, but it’s time to focus on the next game.”

The Generals will look to extend their winning streak next week, where they will play three games in three nights. On Thursday, the Generals will host the first-place Wenatchee Wolves at the Rink Exchange at 6:05 PM, followed by a pair of road games against the West Sound Warriors on Friday and Saturday. Tickets for next Thursday’s game are available online at eugenegenerals.com.