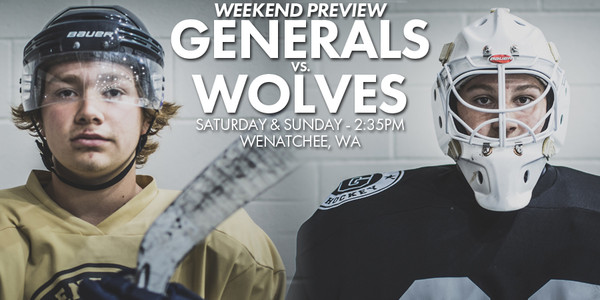 Facing each other for the first time this season, the Generals and Wolves will play two games on Saturday and Sunday afternoon, both beginning at 2:35. Fans can follow the game action on Pointstreak or Fast Hockey.

Sixteen games into the season, the Wolves are the only unbeaten team in the Northern Pacific Hockey League (NPHL). The Generals hope to change that this weekend against a young Wenatchee Wolves team, led by second-year Head Coach Ryan McKelvie.

Last weekend, the third-place Generals were able to gain separation in the NPHL standings from the Tri-Cities Outlaws, who remain tied for fourth. Stellar goaltending from the Generals would be a huge difference-maker, with Chris Pritchard and Zealand Walterscheid combining to save 63 of 64 shots in two games.

On Friday, Pritchard stopped 23 of 24 shots from the Outlaws, keeping the Generals in the game as they broke the tie with a third period goal to earn a 2-1 victory. The next game, last Saturday, provided a little more room for comfort, as the Generals would shutout the Outlaws 6-0 behind Walterscheid’s 40 saves and second shutout in his fifth career junior hockey game.

In addition to the goalies performing at a high level, the Generals saw an array of contributions on offense, with thirteen different players recording at least a point over the two games last weekend. Isaac Vincent (one goal, two assists) and Cole Bloemer (three assists) had the most points in the two-game series, with Jack Thornton and Morgan Neal each scoring their first junior hockey goal in the 6-0 win Saturday.

One week after holding the NPHL leader in points scoreless, the Generals once again face another forward who has the most points in the league. After accumulating five points last weekend, Hayden Givens of Wenatchee has more points than anyone else with 33, and is tied for most goals with 19. Along with Givens, the Wolves have several players who rank near the top in scoring, including Griffin Wiencek, Brayden Durante, Thomas Hendry, and Richie Stickle, all of whom have at least 20 points on the season.

Along with their high-powered offense, the Wolves also have two goalies—Bronson Moore and Max Flynn—who statistically have posted very similar, nearly identical numbers between the pipes. Of Wenatchee’s 16 games, both have started in and won eight games, and each has a goals against average of 1.25, tied for best amongst NPHL goaltenders.

After Sunday’s game, the Generals and Wolves will see each other again very soon. The two teams meet again in two weeks in Eugene on Thursday, December 10th at the Rink Exchange, which will have a different puck drop time than usual, at 6:05 PM.

Before that Thursday night matchup, the Generals begin a five-game home stand on December 4th and 5th against the West Sound Warriors. The games versus the Warriors begin at the normal start time of 7:35 PM, and tickets for these matchups (and the Thursday game versus Wenatchee) are available online at eugenegenerals.com.