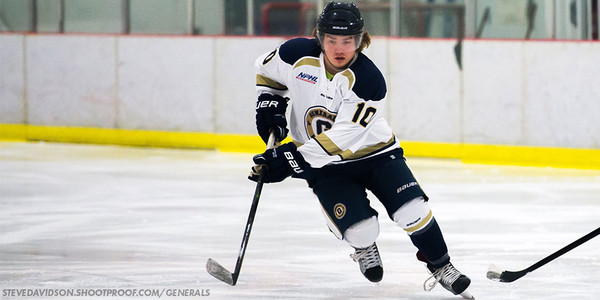 Kennewick, WA - The Eugene Generals (9-6-0-0) faced the Tri-City Outlaws (5-10-0-0) Friday night in Kennewick, Washington with the Generals eking out a 2-1 win in their first trip to TC this season.

It didn't take long for the Generals to open the scoring as Christian "Buddy" Dale got the Generals on the board with just under two minutes gone in the first period. After forcing a turnover in the Outlaws defensive zone, Dale found himself all alone in the high slot and rifled a wrist shot past Outlaws goaltender Taylor Merkley to quickly give the Generals a 1-0 lead. Cole Bloemer and Isaac Vincent both assisted on the opening goal, Dale's eighth of the season.

The Outlaws regrouped quickly, however, and managed to keep the score 1-0 until Sheldon O'Neil, a Generals player last season, tied the score at 1-1 with his fourth of the season 14:25 into the first period.

With the game still tied at 1-1 midway through the final period, Kory Palmer broke the deadlock and beat Merkley to regain the one-goal advantage for the Generals. The goal eventually proved to the the game-winner, the first GWG for Palmer in his Generals career and his seventh goal overall this season. Dustin Gomez assisted on Palmer's game-winner.

Goaltender Christopher Pritchard shut the Outlaws down when it mattered most, saving all 17 shots faced in the second and third periods en route to his fifth win of the season.

The Generals 2-1 win comes one month removed from the last time these two team's faced one another, also 2-1 game but one that went the Outlaws way. The Gens improve to 9-6-0-0 overall and 3-1-0-0 against the Outlaws while once again winning the shot battle, 46-24.

Sean Peterson also made his return to the Generals lineup after missing nearly a month with an undisclosed upper body injury.

Generals still sit in third place and will go for the two-game road sweep tonight at 7:05pm at Toyota Arena in Kennewick, Washington. Watch tonight's game on FastHockey and follow updates on Twitter.

For more information:
Alex Stimson
Associate General Manager
Eugene Generals
This email address is being protected from spambots. You need JavaScript enabled to view it.
541-359-4154 (office)