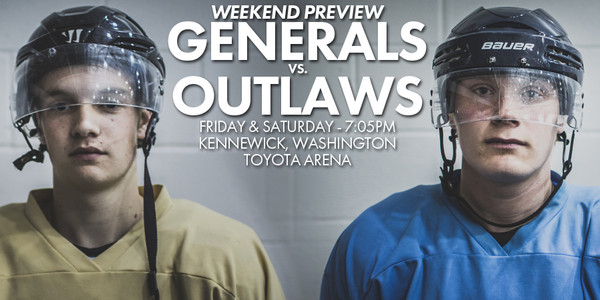 The Eugene Generals (8-6-0-0) will travel to Kennewick, Washington and play two away games against the Tri-Cities Outlaws (5-9-0-0).

After playing two home games against the Bellingham Blazers last weekend, the Generals now begin a span of four straight road games. The Generals and Outlaws will square off for two Northern Pacific Hockey League (NPHL) games on Friday and Saturday night at 7:05pm at the Toyota Arena.

This weekend will mark the third and fourth games between Eugene and Tri-Cities this season. Last month, the two teams played a pair of contests at the Rink Exchange in Eugene. Both teams split the two-game series, with the Generals winning 10-2 one night and the Outlaws earning a 2-1 victory the next night.

The 10-2 win back on October 23rd marked the first time the Generals scored double digits in a game in almost two years. Eight different players scored a goal, including Dustin Gomez and Baxter Cox, who each had two apiece. Gomez scored just six seconds into the game, the fastest goal to start a game in Generals history.

Their next game on October 24th, however, would be a much different story than the previous night. Wearing their pink jerseys for Breast Cancer Awareness Night, the Generals bombarded the Outlaws with 60 shots on net. Despite getting off that many shots, the Generals could only muster one goal in a 2-1 loss.

Entering last weekend with a two-game winning streak, the Generals’ offense was stagnant against the Blazers, scoring just three times over the two games. The Generals lost 3-1 Friday night, and followed with a 6-2 defeat on Saturday. Cole Bloemer recorded the team’s lone goal Friday, while Cox and Cody Arbelovsky each scored in Saturday night’s loss.

Goalies Chris Pritchard and Zealand Walterscheid started in net for the Generals last Friday and Saturday, respectively. Pritchard made several quality saves to keep his team in the game, stopping 38 of 41 shots in the 3-1 loss. On Saturday, Walterscheid recorded his highest-save total in a Generals game, totaling 40 saves on 45 shot attempts from Bellingham.

Even after a sluggish weekend on offense, the Generals still have several players who are in the top ten in scoring. Arbelovsky is tied for fourth in the NPHL with 19 points, while Buddy Dale is tied for sixth with 18 points. Gomez is also near the top, tied for tenth in points with sixteen.

Winners of five of their last seven games, the Outlaws are one of the hottest teams in the league after starting out the season 0-7. A large part of their recent success can be attributed to their ascending offensive production, where the Outlaws have scored 36 goals over their last six games.

Leading the charge on offense for Tri-Cities is Aaron Questad, the current NPHL leader in points (32), goals (19), and assists (13). Entering his fourth season with the Outlaws, Questad has recorded at least a point in all but one game so far this year. Along with Questad, the Outlaws also have two players—Payton Okon and Adam Shimamoto—who are tied for tenth in the league in points with 16 each.

Down 6-3 against the West Sound Warriors last Friday, the Outlaws mounted an impressive comeback with less than ten minutes left in the game. The Outlaws scored three times, including the game-tying goal with 26 seconds left, to force overtime. From there, Questad added to his league-leading point total, providing the heroics with the game-winning goal to give Tri-Cities a 7-6 comeback win in overtime.

The Outlaws had a lot more breathing room the next night, pulling away in the second period with four goals on their way to a 6-2 win over the Warriors in Bremerton. Shimamoto recorded his first career hat trick in the Outlaws’ win, and added an assist as well.

After not gaining any ground on second place last week, the Generals remain in third place in the NPHL standings with sixteen points. Because of their two wins last weekend, the Outlaws are currently tied with the Seattle Ravens for fourth place with ten points. The top four teams with the most points earn a spot in the NPHL Playoffs, which will begin in March.

This weekend will also be the last matchups between Eugene and Tri-Cities during the 2015 calendar year. The next games featuring these two teams will be January 15th and 16th in Eugene.

Fans can the Generals-Outlaws games through Pointstreak or Fast Hockey. The Generals will also provide updates throughout each game on Twitter as well as Facebook.