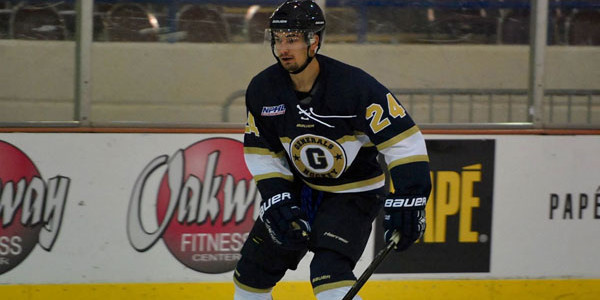 For the second straight night, the Generals could not beat the Blazers in Eugene. Tonight was the team’s last home game for three weeks, as the Generals will play four straight away games starting next weekend.

After trading penalties and shots for most of the first period, the Blazers struck first when Simeon Smith scored a shorthanded goal exactly sixteen minutes into the game. Von Mullin and Justin Sullivan had assists while on the penalty kill for Bellingham.

Not to be outdone, the Generals tied the game at one shortly after when Baxter Cox lit the lamp on the power play. Cox’s power play goal, coming at the 18:21 mark, was assisted by Kory Palmer.

Bellingham began to take control in the second period, scoring three times during the twenty-minute span. Sam Vizenor gave the Blazers the lead with a goal coming 2:37 into the second period, with assists to Brett Hanson and Connor Loos. After a costly five-minute major penalty by the Generals, the Blazers took advantage of the power play opportunity with two goals coming within a thirty-second span. Defenseman Kevin Duncan connected at 9:59, while Sullivan scored his first of the night at 10:28.

Eugene would respond with a timely third period goal, coming from Cody Arbelovsky with 10:49 remaining in the game. Defenseman Mikey Spidal had the assist on the goal, which would ultimately be the team’s last of the night.

The Blazers would close the game with two more goals, coming from Vizenor at 15:18 and goalie Broderick Parker, when he scored an empty netter with four seconds left.

Despite losing his first junior hockey game, Generals goalie Zealand Walterscheid recorded his highest save total in a game with 40 saves tonight. Facing 45 shots, Walterscheid had a save percentage of 88.9%.

The Generals will play the first two of four straight away games when they travel to Kennewick, Washington to face the Tri-Cities Outlaws. The games will be next Friday and Saturday night, both starting at 7:05pm, and fans can follow on Pointstreak or Fast Hockey.