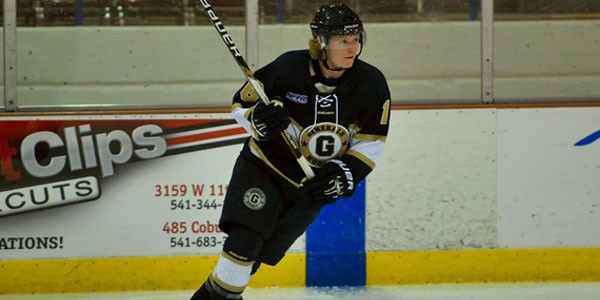 Playing in their first home game in three weeks, the Generals could not beat the Blazers in front of a large, lively crowd. After tying the game at one in the second period, the Generals allowed two unanswered goals the rest of the way.

After a first period that saw no scoring, the Blazers quickly jumped out to a 1-0 advantage in the second period when Justin Sullivan scored at 1:17. Austin Sabin and Kevin Duncan provided the assists on Bellingham’s first goal of the night.

The Generals quickly tied the game at one, when Cole Bloemer scored the equalizer 43 seconds later, exactly two minutes into the period. Bloemer’s goal was his seventh of the season, and his second in as many games.

Bellingham answered with another second period goal, coming from Simeon Smith at the 7:49 mark. Sabin and Mark Klasen assisted on the play.

Sean Meetsma would score the last goal of the game, coming at 11:49 of the third period. Smith tallied the assist on Meetsma’s insurance goal.

Generals goalie Chris Pritchard received the starting nod in net Friday night, and made several quality saves to keep his team in the game. Facing 41 shots from Bellingham, Pritchard recorded 38 saves, his second most in any game this season.

The Generals and Blazers close out the two-game series tomorrow night at the Rink Exchange. Tickets for tomorrow night’s game are available online at eugenegenerals.com.