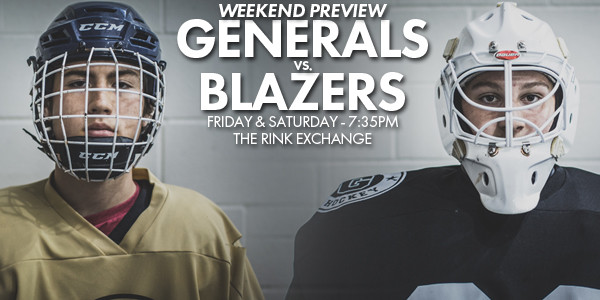 Playing their last four games on the road, the Generals will finally play home games for the first time in three weeks. Both contests are Friday and Saturday night at 7:35pm, which feature the second and third place teams in the Northern Pacific Hockey League (NPHL).

After struggling offensively during their three-game losing streak, the Generals finally found their groove on offense last weekend, scoring eighteen goals in two games against the West Sound Warriors. In their first game last Friday, the Generals had seven goals in the first period alone, on their way to a 10-2 victory which saw nine different players score goals. The next night, the Generals pulled away in the second period to win by a final of 8-2.

There were plenty of bright spots during last weekend’s games in Bremerton, Washington. Fourteen different players recorded at least a point, with Buddy Dale (3 goals, 5 assists) and Cody Arbelovsky (4 goals, 3 assists) leading the way. Dale had five points on Friday, with four of those coming on assists, while Arbelovsky had his first hat trick with the Generals on Saturday. Goalies Zealand Walterscheid and Chris O’Shaughnessy both played equally well in net, as they each stopped 13 of 15 shots in their respective starts. O’Shaughnessy earned his first junior hockey win Saturday night, and Walterscheid improved to 3-0 on the season.

This weekend features several players who are close to the top in the NPHL in points. After a stellar two games in Bremerton, Dale (18 points) and Arbelovsky (17 points) are tied for fourth and sixth in the league, respectively, in points scored. Arbelovsky’s 12 assists are also tied for first in the entire league. Right ahead of Dale and Arbelovsky is Karson DeRego of the Blazers, who is in sole possession of third with 19 points. Also ranked in the top ten in points are Eugene’s Dustin Gomez and Bellingham’s Justin Sullivan, both of whom are tied for eighth with 16 points each.

During the two games between the Generals and Blazers two weeks ago, Eugene had 1-0 leads more than halfway through each game. In their first matchup on October 30th, Bellingham took a 3-2 lead after the second period, before scoring two insurance goals on the same power play to defeat Eugene 5-2. In their next game, the Generals held the aforementioned 1-0 lead through the first thirty-plus minutes, only to see the Blazers score four answered goals to hand Eugene a 4-1 loss.

Generals goalie Chris Pritchard started both games against Bellingham, facing the most shots against him so far this season. In those two contests, Pritchard faced a total of 94 shots, stopping 85 for a save percentage of 90.4%. He recorded 50 saves in the second game, the most he has recorded in any of his seven starts this year.

The Blazers, meanwhile, played two different goalies—Broderick Parker and Christopher Alexakis—during the series against the Generals. Alexakis started the first game, stopping 30 of 32 shots, while Parker was tested more the next night with 41 saves on 42 shots against.

Splitting the playing time between the two goalies is something the Blazers have done all season, case in point last weekend when Bellingham faced the Seattle Ravens. Both Alexakis and Parker earned shutouts, as the Blazers beat the Ravens 6-0 on Friday and 4-0 on Saturday. Parker, who started in the Saturday win, even recorded a goal himself, when he sent the puck down the ice and scored on an empty netter with four seconds left.

Friday’s game at the Rink Exchange is also Military Appreciation Night. The Generals invite all Military personnel and veterans, as well as their immediate family members, to Friday's game and will receive free admission with a Military ID.

Tickets for both games this weekend are on sale now. For those who cannot make it either game, the Eugene Generals Hockey Network (EGHN) will broadcast both games live and for free. EGHN Executive Producer and Associate General Manager Alex Stimson will serve as host and provide play-by-play coverage as well.