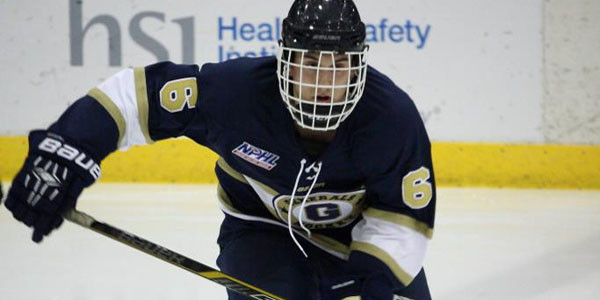 The Generals had contributions from all over the place; Cody Arbelovsky recorded his first hat trick with Eugene, Buddy Dale added two goals of his own, and goalie Chris O'Shaughnessy earned his first junior hockey win in net.

Dale started the scoring in Saturday's game with a goal more than twelve minutes into the first period. Jack Geisler followed with his first goal of the season, coming just 47 seconds later to help Eugene to a 2-0 lead. Caleb Bromley put West Sound on the board with an unassisted goal, trimming the Generals' lead to 2-1 going into the first intermission.

In the second period, the Generals began to pull away with three unanswered goals. Cole Bloemer scored a little over a minute into the period, while Arbelovsky remarkably scored two goals within a nineteen-second span. With Garrett Little adding a goal for West Sound, the Generals went into the final period with a 5-2 lead.

The Generals sealed the win with three third period goals, coming from three different players. Dale scored his second of the night, Arbelovsky completed the hat trick, and Dustin Gomez recorded his third goal of the weekend.

Playing in his second game with Eugene, O'Shaughnessy was able to stop 13 of 15 shots from the Warriors for his first win. Similar to his first start last month, the sixteen year-old from Long Island allowed just two goals in the sixty minutes of play.

The Generals are home next weekend to host the Bellingham Blazers at the Rink Exchange. Both games are Friday and Saturday night at 7:35, and tickets are on sale now.