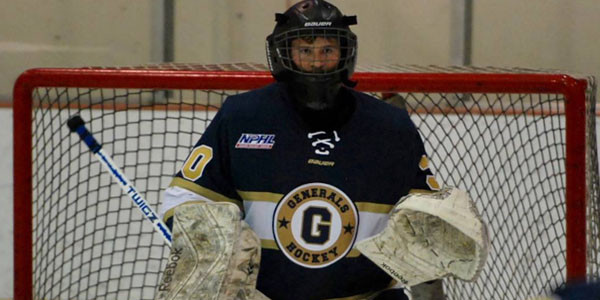 Scoring just four goals in the past three games, the Generals exploded on offense tonight, gathering seven goals in the first period alone. Nine different Generals players accounted for the ten goals, tied for most in a game this season.

In just his third career junior hockey start, Generals goalie Zealand Walterscheid recorded his third win to improve to 3-0. He stopped a total of 13 shots from West Sound, and through his first three games, he has allowed just four goals.

The Generals scored the first of the aforementioned seven first period goals just 1:05 into the game, when Cody Arbelovsky connected on assists from Baxter Cox and Mikey Spidal. Exactly a minute later, Buddy Dale lit the lamp when Isaac Vincent and Brett Sparks provided assists on the team's second score of the night. At 6:25, Jacob Ray put a rebound shot in the back of the net to score his third goal of the season, as well as the Generals' third of the game.

Eugene would get four more goals in the first period to go up 7-0. Nash Berkowitz scored from the point at 8:30, Dustin Gomez tallied his first goal of the night at 10:18, and Vincent recorded his sixth goal of the season a minute later at 11:31. On the penalty kill, Cox scored the shorthanded goal on great passes from Dale and Berkowitz with just 23 seconds left in the period.

In the second period, the Generals had two more goals, coming from two defenseman. At the 2:35 mark, Spidal became the eighth different Generals player to record a goal. Sparks had his first goal of the season when he connected on the power play at 5:10, with assists to Dale and Logan Sanders.

Gomez scored once more for the Generals, as he provided the team's final goal of the night 2:29 into the third period. Arbelovsky and Sanders set Gomez up for the score.

The Warriors would get two goals of their own, both coming from Brett Hawkins. Garrett Little assisted on both goals, while Tyler Perry and Caleb Bromley each had assists at 4:54 and 13:53, respectively.

Prior to tonight's matchup, the Generals had lost their previous three games before ending that streak tonight. The Generals also ended their road losing streak against the Warriors in Bremerton, with their last win at the Bremerton Ice Center coming almost three years ago on December 29, 2012.

Fans can follow Saturday's action in West Sound on Pointstreak or Fast Hockey. The Generals end their four-game road trip tomorrow night, as they head home next weekend to host the Bellingham Blazers at the Rink Exchange.