Weekend Preview: Generals on the Road at West Sound 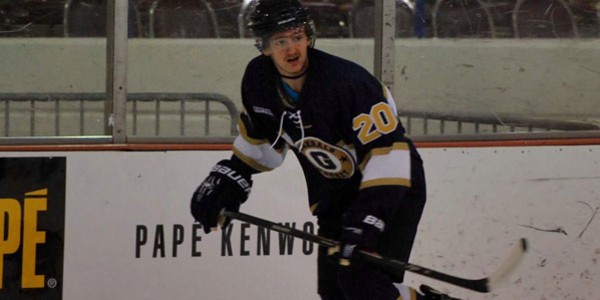 This weekend will be the Generals’ first trip to Bremerton this season. The Generals and Warriors faced each other a little over a month ago in Eugene for two Northern Pacific Hockey League (NPHL) games.

On October 2nd, the Generals played their first home game of the season when they hosted the Warriors at the Rink Exchange. The first matchup was close the entire way, as one goal separated both teams until the final 45 seconds when Logan Sanders scored an empty-netter to clinch a 2-0 victory. Goaltender Chris Pritchard recorded his first career shutout for the Generals, stopping 17 shots as well as preventing the Warriors from tying the game, even with their extra attacker on the ice. Before the game, the Generals had not defeated the Warriors since March 2013.

The next night, Eugene came out firing in the first period, scoring five times in the first fifteen-plus minutes of the game on their way to a 9-2 win. There were several bright spots for the Generals during the game; goalie Zealand Walterscheid won his first junior hockey game in his first junior hockey start, Kory Palmer and Nash Berkowitz each had five points, and Dustin Gomez recorded four points himself.

Fast forward to last weekend, when the Generals travelled north to face the Bellingham Blazers for the first time this season. In both contests, the Generals held a lead halfway through each game before the Blazers took the lead at the end of the second period and, ultimately, holding on in the third period to win both games over Eugene.

After a relatively quiet thirty-five minutes of action on Friday, other than a Buddy Dale goal for a 1-0 Generals lead, a lot of scoring happened in the final five minutes of the second period. Bellingham scored two unanswered goals, only to see Isaac Vincent tie the game at two, then proceed to score once more against the Generals for a 3-2 advantage. The Blazers were able to secure the 5-2 win with two goals in the third period, both coming on the same power play.

Similar to the previous game, Saturday saw Eugene take a 1-0 lead after Kory Palmer connected on the power play in the first period. The Blazers were then able to score three times within the final ten minutes of the second period, and add another in the first eleven seconds of the third to hand the Generals a 4-1 defeat.

Since scoring ten goals back on October 23rd, the Generals’ offense has stalled in the last three games, all losses. In those three games, the Generals have accumulated just four goals, and have not scored more than twice in any game during the three-game losing streak.

Conversely, the penalty kill continues to be an area the Generals have excelled in. They are still at the top of the NPHL in penalty kill percentage at 88.52%, and are tied for first with the fewest power play goals allowed (seven).

Pritchard has received the starting nod in goal in each of the Generals’ last four games. In those four games, the third-year veteran from Tualatin has stopped a total 125 of 138 shots. No other goalie in the league has played more minutes than Pritchard, who also ranks fifth in the NPHL in both goals against average (2.58) and save percentage (91.3%).

Meanwhile, the Warriors are coming off a weekend of playing three games in three nights, their second three-game weekend stretch of the season. Not only that, all three games last weekend were in three different arenas. Last Friday, the Warriors hosted the Tri-Cities Outlaws, where they fell 8-4. They then travelled to the Outlaws’ rink in Kennewick, where they were shutout 10-0 before closing out the weekend in Wenatchee to face the Wolves on Sunday. The Wolves scored seven unanswered to hand the Warriors a 10-1 defeat.

Caleb Bromley leads the Warriors in both points and assists with eight and six, respectively. Brett Hawkins not only is tops on the Warriors with five goals, his four power play goals are the most in the entire NPHL.

Both teams will not meet again until next month, when the Generals host the Warriors in Eugene on December 4th and 5th.

Fans can follow the action on Friday and Saturday, both at 7:35pm, at the Bremerton Ice Center on Pointstreak or Fast Hockey. The Generals are back home next weekend on November 13th and 14th when they host the Blazers.