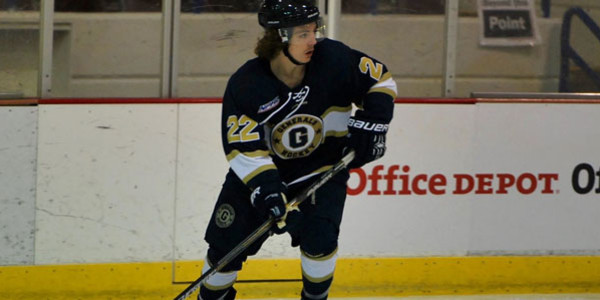 After losing their first game of the season almost two weeks ago, the Generals bounced back with double digit goals. Tonight was the first time the Generals scored at least ten goals in a game since February 4, 2014.

As soon as the puck dropped, the scoring began immediately. Six seconds into the game, Dustin Gomez skated the puck down after the faceoff for the first goal of the night. Aaron Questad of Tri-Cities quickly tied the game at one just a minute later at 1:16.

Logan Sanders helped Eugene take a 2-1 lead at 7:48 with an unassisted goal, which was quickly followed by an Outlaws goal at 9:44 from Payton Okon to tie the game at two.

Both teams stopped exchanging scores, as the Generals scored the eight remaining goals the rest of the way. The last two first period goals happened within a thirty-second span at 13:59 and 14:29. Cody Arbelovsky scored the go-ahead goal, while Cole Bloemer connected to give the Generals a 4-2 advantage going into the first intermission.

Eugene began to pull away in the second period, when they scored three times from three different players. Isaac Vincent recorded his fifth goal of the season thanks to an assist from Sanders, while Gomez lit the lamp right after serving his penalty. Nineteen seconds later at 12:26, he provided the assist on Jacob Ray’s goal, the team’s seventh of the night.

Baxter Cox provided the next two goals for the Generals, both coming in the third period. His first came 45 seconds into the period, followed by a power play goal at 8:50. Buddy Dale closed out the scoring with his first of the night, happening with a little over six minutes left in the game.

After allowing two first period goals to the Outlaws, Generals goalie Chris Pritchard settled down and did not give up any during the last fifty minutes of the game. In total, he recorded eighteen saves on twenty shots, leading to his fourth win behind net.

The Generals close out the weekend tomorrow night when they host the Outlaws at the Rink Exchange. Tomorrow’s game starts at 7:35, and tickets are available online at eugenegenerals.com.