Weekend Preview: Generals Back at Home 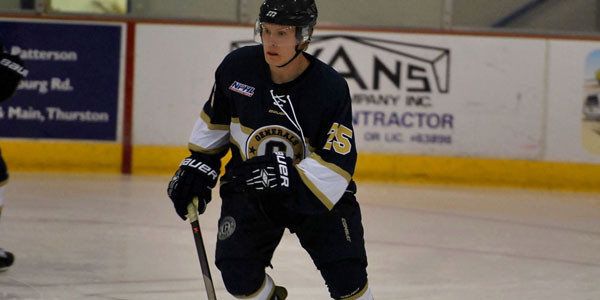 The Eugene Generals (5-1-0-0) return to the ice this Friday and Saturday night when they host the Tri-Cities Outlaws (0-6-0-0) at the Rink Exchange.

After having a bye last weekend, the Generals are back in action for the first time in almost two weeks. Both Northern Pacific Hockey League (NPHL) games begin at 7:35.

Two weeks ago, the Generals travelled to Kent, Washington for a pair of away games against the Seattle Ravens. Eugene dominated the first night, shutting out the Ravens 7-0, thanks to contributions from all over the place. Zealand Walterscheid recorded his first junior hockey shutout in his second career start, Cole Bloemer tallied his first hat trick, and a total of ten different players had at least one point.

The next night would be a different story, as the Generals lost their first game of the 2015-16 season by a score of 2-1. Despite outshooting Seattle 45-18, the Generals could only muster one goal in the sixty minutes of play. Rookie Chris O’Shaughnessy played well in goal for the Generals in his first junior hockey start, allowing just two goals on eighteen shots against.

Six games into the young season, the Generals have several players who can make an impact on any given night. Kory Palmer leads the team in points and goals (eight points, five goals), with Buddy Dale, Dustin Gomez, and Cody Arbelovsky tied for second in points with seven. Bloemer and Nash Berkowitz both have six points apiece as well.

Special teams continues to be a strength for the Generals through the team's first six games. Eugene leads the NPHL in both power play percentage (23.08%) and penalty killing percentage (88.57%). The Generals hope that success on special teams carries over to this weekend.

As far as goalies for the Generals are concerned, it remains to be seen who will get the start in net. Over the last four games, the team has rotated amongst their three goaltenders (Walterscheid, O’Shaughnessy, and Chris Pritchard) none of whom has given up more than two goals during that span. Pritchard and Walterscheid each recorded shutouts in their last starts, and both are top three in the NPHL in save percentage. All three goalies have combined for a 92.6% save percentage and a 1.50 goals against average, both best in the league.

Like the Generals, the Outlaws’ last games were also against the Ravens, when they had a home and away game against them last weekend. Last Friday, the Outlaws hosted Seattle in what would be a tightly-contested contest. After trailing 3-0 after one period, the Outlaws stormed back to tie the game at three apiece with seventeen minutes left in the game. Seattle wound up scoring the eventual game-winner not too long after, resulting in a 4-3 loss for the Outlaws.

Similar to their previous game, the Outlaws once again faced a deficit going into the first intermission last Saturday. This time, however, the Outlaws scored just once on their way to a 6-1 defeat on the Ravens’ home ice.

The Outlaws have veterans on their roster who can provide a spark on offense. Through their first six games, second-year forward Adam Shimamoto leads the team in points with six, while Aaron Questad leads the team in goals with four.

Tickets for both games are available for purchase online at eugenegenerals.com. Fans can also buy tickets at the Generals ticket office located at the Rink Exchange, or by calling 541-359-4154.

For those who cannot make it either home game, the Eugene Generals Hockey Network (EGHN) will broadcast both games live and for free. Associate General Manager and Play-by-Play Announcer Alex Stimson will serve as hosts both nights.