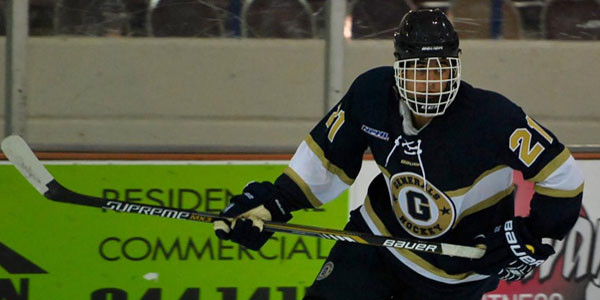 The Eugene Generals (5-1-0-0) lost their first game of the regular season, falling to the Seattle Ravens (1-5-0-0) 2-1 Saturday night at the Kent Valley Ice Centre.

Despite outshooting the Ravens by a margin of 45-18, the Generals could only muster one goal Saturday night, their lowest point total of the season. Their 5-0 record coming into tonight’s game was the second best start to a season in franchise history.

The first and only goal from the Generals came at 11:15 of the first period, when Buddy Dale connected for his second goal of the young season. Cody Arbelovsky assisted on the play, giving him a total of four points in the two games against the Ravens this weekend.

Seattle tied the game at one apiece at 4:22 in the second period, as Grant Omyer scored his first goal of the season. Jake Best and Caleb Fenton each had assists on the goal by the defenseman from Issaquah, Washington.

With the Ravens on the power play in the third period, Best gave his team the lead for good when he lit the lamp at the 3:16 mark. Shon Chand recorded the assist on the Ravens’ go-ahead goal.

Generals goalie Chris O’Shaughnessy started Saturday night, his first game in junior hockey. The fifteen-year old from Long Island played well, stopping 16 of 18 shots for a save percentage of almost 89%. With the goalies on the roster performing at a high level, it will be interesting to see who will get the starting nod for the Generals in their next game.

With a bye next week, the Generals will have almost two weeks before their next games, at home on Friday, October 23rd and Saturday, October 24th. Both games begin at 7:35pm at the Rink Exchange.

On Saturday, October 24th, the Generals will be hosting their Breast Cancer Awareness Night presented by the Health and Safety Institute. The Generals will be wearing their special pink jerseys to promote breast cancer awareness, which will then be auctioned online after the game. Tickets are on sale online at eugenegenerals.com.