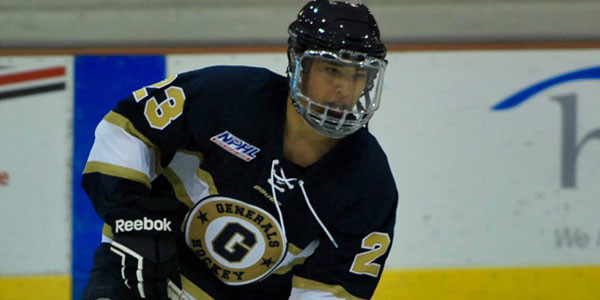 Friday night was the third matchup between the Generals and Ravens this early in the season. With the win, the Generals are unbeaten through their first five games of the regular season in the Northern Pacific Hockey League (NPHL).

There were plenty of bright spots in the team’s win tonight; Cole Bloemer had a hat trick, Zealand Walterscheid recorded a shutout, and rookies Josh Hawn and Cody Arbelovsky scored their first goals as members of the Generals.

The Generals lit the lamp once in the first period, when Hawn scored his first junior hockey goal to give his team the lead for good. Assisted by Baxter Cox, Hawn’s goal came 17:25 into the game for the team's first score of the night.

The floodgates began to open in the second period, as the Generals scored four times to give themselves a 5-0 advantage going into the final intermission. Bloemer scored the first and last goals of the period, coming at 1:55 and 14:31. In between his goals, Kory Palmer connected at 6:27 while Arbelovsky tallied his first goal as a General at the 8:37 mark.

In the final period, the Generals scored two more times, with Buddy Dale scoring, as well as Bloemer for his first hat trick in a Generals uniform. Dale scored at 8:39 on assists from Dustin Gomez and Michael Spidal, and Bloemer completed the hat trick with a little over a minute left in the contest thanks to an assist from Arbelovsky.

For the second time in the past three games, the Generals were able to shutout their opponent. This time, Walterscheid blanked the other team for his first career shutout in junior hockey in just his second start. No other goalie in franchise history has recorded a shutout that quickly into his Generals career than Walterscheid did Friday night. The goalie from Los Alamos, New Mexico stopped all eighteen shots from the Ravens, and has now saved almost 94% of shots against him on the season.

The Generals will have their last regular season meeting with the Ravens in Kent Saturday night at 6:35.Fans can follow tomorrow’s game action through Pointstreak or Fast Hockey.