Weekend Preview: Another Road Trip against the Seattle Ravens 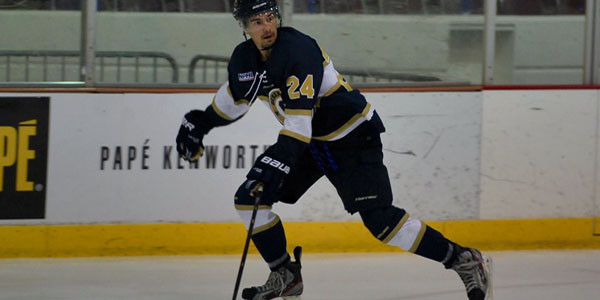 The Eugene Generals (4-0-0-0) will be on the road this weekend to play two games against the Seattle Ravens (0-4-0-0) at the Kent Valley Ice Centre Friday and Saturday night.

After beating the West Sound Warriors twice this past weekend, the Generals are 4-0 for the first time since their inaugural season in the Northern Pacific Hockey League (NPHL) back in 2005. This weekend will be the third and fourth games between the Generals and Ravens this season.

Just two weeks ago, the Generals travelled to Kent for a pair of games against the Ravens to start the season. With the expansion Ravens playing their first games in franchise history, the Generals won both contests, each by a single goal. The Generals managed to stave off a late rally by the Ravens to win their first game of the 2015-16 season by a score of 5-4. The next night was tied at one throughout most of the game, before Cole Bloemer scored the game-winning goal with less than three minutes left to give Eugene a 2-1 victory.

A bright spot for the Generals so far has been the all-around contributions from the entire team, with thirteen different players recording at least a point through the first two weekends. After his career night last Saturday with four goals and an assist, Kory Palmer leads the team with seven points, good for fourth best in the NPHL. Dustin Gomez has the second most points on the team with five, and is the only player in the league with multiple shorthanded goals this season. Forward Isaac Vincent and defenseman Nash Berkowitz are tied for third on the team with four points, with the latter ranking second in the NPHL amongst defenseman in points scored.

Palmer’s four-goal performance tied a Generals record for most goals by a player during a game, becoming the eighth player in franchise history to score four times. It was the first time a Generals player scored four times in a game since Hunter Hartman achieved that feat versus Vancouver on January 7, 2014.

Another area the Generals have excelled in is the relentless pursuit on offense. Through their first four games, they have averaged 52.75 shots on goal per game. This past weekend alone, the Generals had 127 shots on net, including 76 last Saturday. Saturday’s game marked the most shots on goal for the Generals during a game since they had 78 back on November 30, 2013.

Generals goalie Chris Pritchard has stood out through the first two weekends of the year. Recording his first career shutout last Friday, Pritchard is 3-0 on the season and tied for first in the NPHL with a goals against average of 1.67. With Zealand Walterscheid also playing extremely well in his first junior hockey start last Saturday, Generals goalies have combined for the best save percentage in the league with 91.8%.

Meanwhile, the Ravens will look to get their offense back on track after getting shutout in both games against the Bellingham Blazers last weekend. In their first game of the season against the Generals, Seattle had contributions from multiple players. Jake Best scored the first two goals in franchise history, while Zane James and Ben Lehfeldt-Ehlinger each had multi-point games for the Ravens.

It remains to be seen who will start in net each game for the Ravens, as they have evenly split time between Justin Nelson and Josh Stone. Nelson and Stone rank first and second with most saves in the league, respectively, and have alternated as the starting goalie in each game this year.

This weekend will be the last meeting between the Generals and Ravens in Kent this regular season. The remaining four games between the two teams during the regular season will be played in Eugene, the next of which will be December 18 and 19.

Friday and Saturday night’s games in Kent begin at 6:35pm. Fans can follow this weekend’s action through Pointstreak or Fast Hockey. The Generals will provide updates throughout both games through their Facebook and Twitter as well.