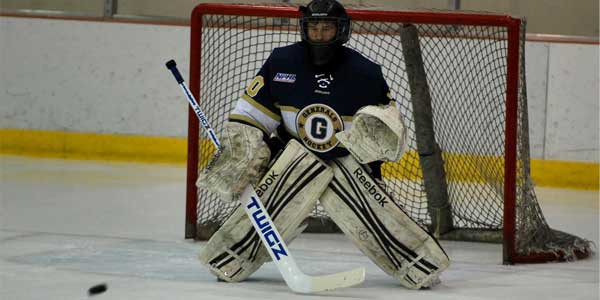 The Eugene Generals (4-0-0-0) concluded their second weekend of the season with a convincing 9-2 victory over the West Sound Warriors (0-2-0-0) Saturday night.

One night after defeating the reigning NPHL champion Warriors for the first time in two-plus seasons, the Generals swept West Sound in a two-game series, something they had not accomplished since February 2013. The Generals are also 4-0 for the first time since their inaugural season in 2005-06.

Kory Palmer had a night to remember in his fourth game with the Generals. With his family watching in the crowd, the Salt Lake City native scored four of the team’s nine goals. He also added an assist for a total of five points in Saturday night’s contest.

The Generals were on fire from the very start, scoring five times in the first period from five different players. Dustin Gomez started the scoring spree with a shorthanded goal at 5:25, followed by a goal from defenseman Nash Berkowitz at 8:30, and then from Isaac Vincent at 9:53. Palmer scored the first of his four at the 15:09 mark, while Jacob Ray lit the lamp just twenty-six seconds later for his first point of the season.

After West Sound’s goal late in the first period to make it 5-1, Palmer scored the next two goals, both courteously of Gomez, to give Eugene a 7-1 lead. During the second period, Palmer deflected a Dustin Gomez shot at 7:34 for the team’s first power play goal of the night. At 3:57 into the third period, Palmer completed the hat trick when Gomez set him up yet again.

West Sound’s second and final score came on another power play at 8:58 of the third period, again from Justin Sommer who tallied both Warriors’ goals on the night. Bun Hunsperger and Caleb Bromly each had assists on the play, making it a 7-2 game.

With less than two minutes left in the contest, Palmer and Vincent each recorded goals on special teams. Palmer’s fourth goal of the night came on the power play at 17:15, with assists to Berkowitz and Cole Bloemer. Vincent recorded his first multi-goal game as a General, scoring while shorthanded with 1:32 left in the final period.

Zealand Walterscheid started in net tonight for the Generals, his first ever junior hockey game. He stopped 13 of 15 West Sound shots, with the lone two goals happening with the Generals on the penalty kill.

In each of the Generals’ four games this season, they have recorded at least 41 shots on net. Tonight was no different, as the Generals had their highest shot total of the season so far with a whopping 76.

The Generals will be on the road next weekend, travelling north to face the Seattle Ravens again on Friday and Saturday night. Both games begin at 6:35pm, and fans can follow the action on Pointstreak or Fast Hockey.