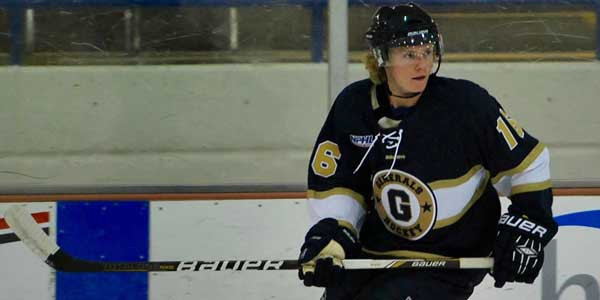 Aside from the Generals rocking their brand new jerseys, the other story tonight was the play of goalie Chris Pritchard. After allowing just one goal the previous game, Pritchard recorded his first shutout of his career, stopping 17 West Sound shots. In three games this season, the third-year goalie has only allowed five goals and saved almost 93% of shots faced.

In front of a lively and energetic crowd, the Generals continuously fired shot after shot in the first period, getting 27 on net. Eugene was able to muster one goal during the first, when Isaac Vincent dove and scored on the power play. Brett Sparks and Buddy Dale each had assists on the goal, coming 13:44 into the game.

With Eugene on the penalty kill for a good amount of the third period, the Generals not only killed all five of the penalties, but also outshot West Sound 17-5. As the Warriors tried tying the game late, Generals defenseman Logan Sanders was able to gain control of the puck and skate it down for the easy score with 45 seconds left.

Friday marked the first time in franchise history the Generals recorded a shutout in a home regular season opener. It is also the first 3-0 start for the team since the 2006-07 season.

This game also marked the first Generals’ victory over the Warriors in over two and a half years. The last time Eugene beat West Sound was March 1, 2013, when they won at home 3-2 in overtime.

The Generals and Warriors play again tomorrow night at 7:35 at the Rink Exchange. Tickets are on sale at eugenegenerals.com, and EGHN will broadcast the game live online.