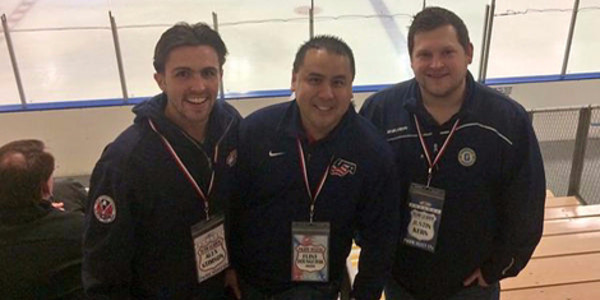 The aforementioned USA Hockey camp is an annual event attended by the top players of the Pacific District, as well as coaches and managers throughout the country. Head Coach Justin Kern, General Manager Flint Doungchak, and Associate General Manager Alex Stimson all made the trip down to San Jose for the weekend.

During the camp, which lasted from Thursday through Sunday, approximately 240 players overall were separated into three age groups (Select 15, Select 16, and Select 17). Within each age group, players were divided into four teams of twenty players, with a designated team leader assigned to each team.

Coach Kern, who was appointed as a team leader for a Select 17 squad, learned a lot from the experience and was also able to connect with members of USA Hockey throughout the country.

“For me, it was such a great trip,” beamed Kern. “I was able to meet other coaches and members of USA Hockey at all levels. I brought away some great advice from coaches at all levels, and I can’t wait to bring that to my team this upcoming season.”

In addition to meeting coaches and members of USA Hockey, Kern also raved about his time as a team leader for one of the Select 17 teams. “The best part was being able to lead such a great group of players for the weekend,” stated Kern. “These are kids who have very bright futures, and to be able to have been a part of it was fantastic.”

Doungchak, who has been to this specific camp every year since 2006, talked about his experience and how it was great to reconnect with people from USA Hockey.

“As always, this is an incredible event,” commented Doungchak. “I get to see the progress of the district’s best players. It’s also an education as it’s the time of year when we bring together the nation’s best coaches. Plus, spending time with friends from the USHL, NAHL, and Division I College always improves our ability as a team to provide opportunities for our players.”

Stimson, who was a team leader for a Select 15 team, also shared similar sentiments about his time in San Jose.

"Beginning to end, it was just an incredible experience,” expressed Stimson. “I was fortunate enough to lead one of the 15 year old teams, and I think I learned as much from them as they learned from me. Meeting and working with such wonderful players, coaches, and staff members really was an honor, and I look forward to serving USA Hockey again this July in Colorado Springs.”

Only a select number of players were chosen for each age group. The selected players will now travel to Buffalo, New York for the USA Hockey Player Development Camp, where they will have a chance to be invited to the National Team Development Program (NTDP).